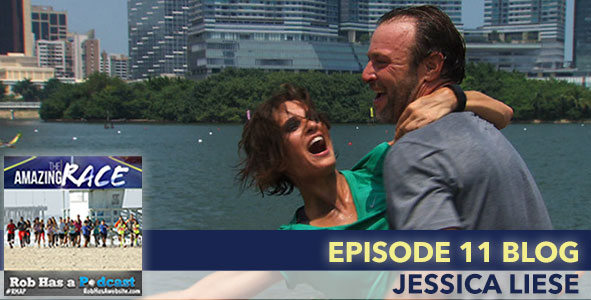 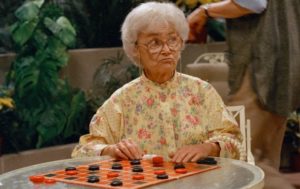 Back in the old days, there were no podcasts. We watched TAR in regular def and recorded it with videotapes and we liked it that way![/caption]

I want to start this week’s blog with a story. Picture it: New York City, 2008. Hotly anticipating the Season 13 premiere is a fledgling Amazing Race fan looking ahead to her third TARCon. Podcasts exist, but are not A Thing yet. In fact, this particular fan has no online presence to speak of beyond, like, LiveJournal and Friendster. She’s not even a regular poster on Television Without Pity, which is at the time basically the only semi-civilized, non-echo-chamber site on the Internet where you can go to talk about CBS reality TV.

After viewing the season premiere, this young fan was inspired to dip a toe into the pool of discussion after the show prominently featured one particular team whom she absolutely couldn’t stand: a newly-dating couple named Terence and Sarah, who were smug, aggressive competitors who yelled at each other from minute one. She posted something to the effect of: “Terence and Sarah are just awful and they need to get the hell off my television immediately.” It was one comment piling onto many, it did not yield satisfying discourse, and she went back to lurking, mostly.

The season continued. Terence and Sarah went out in fifth place. The finale approached. This same fan …okay, can we drop this conceit yet? this fan was me…I was planning this one-day mini-race over TARCon weekend, and I posted to TWoP asking for volunteers to babysit the tasks and hand out clues. And I got an email from Sarah. She was super excited about the concept, and she and Terence were happy to help out if they could. So they came to the starting line, they did the Phil speech for us, and they could NOT have been nicer people. The next night, they sought us out at TARCon because we were basically the only non-Racer folks they knew at the party.

In fact, even though they split amicably not long after that, they both continued to visit every TARCon until the final one, nine seasons later. Sarah’s a founding member of the Wine and Cheese Alliance.  Terence was at the Times Square starting line for Season 25. You’d never know it from watching their season, but you couldn’t find racers more appreciative of their experiences with the show, and with the fans.

Naturally, once I got to know them, I felt awful about what I’d said online. Even though they probably hadn’t seen my specific comment. Even though they were well aware of what the Internet in general thought of them. Back when I posted my comment, I didn’t know what the hell I was talking about. They were awful on the show, but I had no idea who they really were. (And obviously, making an appearance on TV myself a few years later, and having TWoP pronounce me “way too intense,” “super negative,” and “what a psycho” on the grounds of not smiling while losing on a game show, drove the point home.)

So from that point forward — that was roughly two years before RHAP itself was more than a glimmer in Rob’s eye, and nearly four years before I ever appeared on RHAP — I was very careful in ALL of my online interactions to stay on the right side of what I thought was the line between “fair criticism” and “attack.” That line can vary according to team — I assumed at first (not necessarily correctly) that teams who have had previous TV or online exposure are not only a little bit better able to not take things personally, they are less likely to be very invested in RHAP. Over time, we actually got feedback from some of the racers themselves and I got a better sense of exactly how far I could push that line in a lot of cases. (It’s highly possible that some of the people who come off as jerks on the show are jerks in real life, but by and large, that hasn’t been my experience. About the worst you could say about some of them is that they really like attention, but that’s true of basically anybody who appears on television.)

Obviously, longtime listeners know full well that I have not always come correct in that department. Furthermore, I know that the uniqueness of the coming season’s cast is going to require us to recalibrate this all over again lest I bring a lot of angry fanbases down on my head. But in all but a couple of cases, I like to think I’ve been pretty good at providing entertaining analysis without getting too personal OR getting boring. There is a huge difference between being critical of someone’s Race behavior and critical of who they are as a person, and in that Race behavior bucket, I’ve still found plenty to talk about.

With all that preamble, let’s get into talking about what’s going on as we approach the Season 27 finale, and let’s talk about it in terms of how the teams are racing and what they’re like on television rather than whether or not we like them as people or what we think they are like outside of the show.

But hey, speaking of Terence and Sarah, I think there’s a very Terence and Sarah kind of team in these finals in Logan and Chris. They are very intense, they argue a lot, and race-wise, they’ve been upstaged at nearly every turn by a team that’s basically dominated the season. Chris seems to want to be a strategic mastermind if not outright villain, but nothing he’s done has appeared to have any real effect on the Race as a whole.  Given an edit that’s portrayed them as, at turns, ineffectual and combustible, I never predicted we’d see them in the finals, but here we are.

Justin and Diana are great racers. There is absolutely no doubt about that. Their competition is no less Race-competent than in any other season; if they’d won every leg, I might think so, but three other teams managed to get one over on them at various points. Put them up against any of the best-ever teams, on ANY of the previous race courses, and I like their chances. Apart from their obvious racing skills, Justin’s a native New Yorker, which affords him at least a passing familiarity with the greater metro area they’re about to visit…I wouldn’t call that home field advantage per se, but it can’t hurt.

That said, they made some big mistakes this past leg, which made it clear that even the slightest screw-up can send Justin, particularly, into a tailspin. In adverse situations, he can’t look outside himself to be a good teammate. He says nonconstructive things to Diana and even worse things to bystanders. This was probably their worst leg all season. They’ve lost a lot of momentum here, and they looked positively awful in the process.

I’ve gone on record as saying I don’t think either of these teams is getting anything resembling a winner’s edit. But there’s one crucial difference between the green team and the paparazzi that suggests to me that if either of them IS going to win, it’s Justin and Diana: namely, both teams have argued, but only one of those teams is ever shown resolving those arguments. Every time we’ve seen Justin flip out at Diana, we see him smoothing the waters either enroute to the pit stop or at the beginning of the next leg. He’s a jackass from time to time, but at least he is a repentant jackass. We have not seen nearly as much self-examination on the part of Logan and Chris. Which doesn’t mean they never had that same moment where they said, “I wasn’t a good partner to you, and I need to do better,” it just means the editors didn’t think it was crucial to show it. (Logan and Chris treat each other roughly the same regardless of how well they’re racing, so I think the only story I could extract from a paparazzi win would be around something like, “even their rocky dynamic doesn’t slow them down!”)

Which leaves us with the one team in the finals who’s never won a leg, which is also the only team in the finals that doesn’t seem to have a significant contingent of people threatening to stop watching if they win. This is also the one team in the finals who’s never been shown having any kind of conflict with each other, and while they’ve been at the center of a fair amount of drama, they’ve experienced very little fallout from the one truly treacherous thing they did (namely, U-Turning a team they’d previously made deals with). The worst thing you can say about Joey and Kelsey is that they’re kind of boring, and largely invisible, compared to the competition. They’ve got a lot of fans rooting for them by default despite the lack of first-place finishes under their belt.

I definitely don’t feel like Joey and Kelsey are a Beekman kind of team who lucks their way into the million dollars at the 11th hour. Sure, they don’t have any first places to boast about, but they’ve also never even come close to elimination. They’ve proven themselves to be decent, if sometimes outclassed, at a pretty wide variety of tasks. The only thing they’ve been shown to be extremely bad at is pronouncing “The Hague”; everything else has gone more or less okay for them. I think this totally non-flashy competence is leading somewhere. Plus, they’ve got the irony of so many second-place finishes to give them a pretty great story arc.  After all, the only first-place finish you absolutely have to have is that last one.

Something that I think gets lost whenever we roll into the finale is that the final three teams are almost never all three of the teams we’d have wished for, or even all three of the objectively best racers (as if “objectively best racers” is even something we could determine!). Cheering by default is not a foreign concept to longtime Amazing Race fans. In fact, if you were rooting for Krista and Tiffany going into this leg, you’re in pretty good company among old-school fans: a charming and likable team, and sometimes even the odds-on favorite, very frequently goes out right before the finale: Kevin and Drew, Cha Cha Cha, the bowling moms, Dustin and Kandice, Andy and Tommy, the Twinnies, and the Afghanimals, to name a few.

But let’s step outside the game one more time: based on my limited interactions with all three final teams, I can safely say that all of them are pretty awesome people off the show. And they’ve certainly all made major contributions to a season that, love it or hate it, has almost always been exciting. I, for one, would be happy with any of this bunch winning a million dollars.