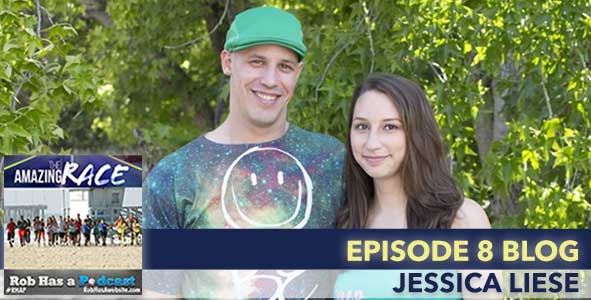 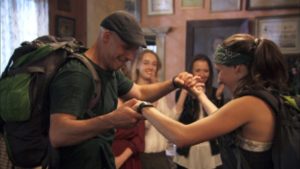 Probably not even in the top ten most annoying teams ever.[/caption]

It’s time we spent a little bit of column space on Justin and Diana.  In fact, there’s not much else to talk about as regards this season, is there? (I’ve struggled for several weeks to frame things any other possible way…and I’ve failed, so I’m hereby surrendering to the green inferno.)

I find it hilarious whenever self-professed diehard fans announce to the world that Justin of all people is compelling them to forever renounce a show that’s brought us the likes of Flo, Mirna, Jonathan Baker, Rachel Reilly, the Weaver family, Kent, and Marie. It’s especially hilarious when they continue to announce this week after week, because clearly they’re not fully quitting TAR if they’re still here to tell everyone about it multiple times. Love them, hate them…the green team hasn’t exactly inspired you to stop talking about them.

Yes, you are completely within your rights to dislike a team. Yes, you are within your rights to dislike a team even if we here at RHAP don’t. Yes, you absolutely CAN quit watching a show because you can’t stand someone on it (Beastmode Cowboy, I’m looking at you). And yes, I’m well aware that teams who suck my kneecaps tend to get a free pass around here. But I’ve gotta say: the green team’s far from the most obnoxious team that’s ever been on the show, and to use a term that used to get you banned from Television Without Pity back in the day, I don’t really get the hate.

Major complaints about Justin (because let’s be real, Diana’s not the reason this team is polarizing) include: he is cocky, he mugs for the camera, and the other teams can’t stand him. I’m not the first person to make this comparison, but boy does that ever remind me of someone else from Amazing Race lore, and the comparisons don’t stop there — douchey hats? Check. Regional accents? Check. Invisible fiancees? CHECK. And you guys, by and large, LOVE Justin’s spiritual ancestor, one Rob Mariano.

Some of the things Boston Rob said back in season 7 are basically word for word the same things Justin is saying: we’re out in front, we’d like to stay there, we’ll do whatever it takes, the other teams don’t like that, screw the other teams, we’re here to win. Their approaches to the game are very similar. I would argue they’re getting nearly identical edits, i.e., they are not the team that’s winning, they’re the team to beat. Yet while Romber got their fair share of backlash back in the day — Amazing Race purists, especially, didn’t like the Survivor-esque strategy they brought to the table — it was nothing like what we’re seeing twenty seasons later for the green team.

So why is Boston Rob one of the show’s most beloved contestants, the reason people (this person included) became diehard fans in the first place, and the breakout star of the franchise’s highest-rated season ever…and Justin’s inspiring people to tell the entire internet they’re quitting the show? The major difference, as far as I can tell, between Justin and the Rob That Doesn’t Suck is the fact that Rob has a little bit of detachment going on. He has always acted like the TV star that he was, as though he exists completely inside this TV universe without any kind of awareness that the show is something he could consume when not the star of it. He rarely broke the fourth wall.

Whether this is true or not, through four Survivor stints and two Amazing Races, you never got the sense that Rob Mariano even owned a television, much less deigned to watch the programs on which he appears. Reality TV is for nerds. Cool guys like Rob spend their Wednesday nights playing poker and watching sports. Justin’s joy at being on the show is genuine and impossible to hide, and he’s painfully, awkwardly aware that people like him will be watching his every move, and the two things together result in a villain who’s a little less Jeremy Irons in The Lion King and a little more Gilbert Gottfried in Aladdin.

So I’m revising my previous statement: there IS a curse of the superfan, but it’s not the curse you think it is. I think they can definitely do well, but I think it’s a harder battle to get the audience behind them. Superfan teams are forever resigned to have other superfans view them with a much more critical eye than their non-superfan competitors. (I’d argue that folks like Cochran, Spencer, Shirin, and Max, and for that matter, our own Rob That Sucks, get the same treatment over on Survivor. Some of you may not remember, but yes, Fearless Leader did indeed get more than his fair share of backlash back in ’03.) My theory: superfans frequently feel like the Justins and the Shirins of the world are taking up a spot that they themselves should be occupying (whether or not they actually ever applied to be on the show); instead of coming across as a stand-in for the audience, the superfan contestant is the person that took your spot.

So when the superfan gets portrayed in an even slightly negative light, it pings something deep within ourselves: if we were the token superfans this season, occupying our spot, the other teams might not like us. Or the editors would show us as being obnoxious. America wouldn’t love us, either, and there’d be some blowhard on a message board somewhere informing the world that we are the reason they’re quitting the show for good. Superfan reality contestants hold a dark mirror up to us.

So other than dialing it back a bit, what can Justin and Diana do to win back your hearts, and the hearts of their fellow racers? Well, I think they need to look over at a team who’s excelling at this, if not excelling at the race: their nemeses, Team Texas.

I’m not going to hear any arguments to the contrary: from a racing standpoint, what Tanner and Josh did this week was idiotic, plain and simple, and they should have gone home. If you’re in last (or next-to-last) place and you let another team go ahead of you, that’s not gallant or classy — it’s suicide. There are plenty of moments that afford you the opportunity to be classy and chivalrous when your continued participation in the race is not on the line. Not only is this a race, it’s a life-or-death moment in the race. Don’t choose death. Really. But I think it’s fair to say that if it had been Justin and Diana down there at the bottom of the barrel, fighting it out to avoid elimination (or non-elimination as the case may be), the team on the last-place mat next to them would probably not be crying at the prospect of losing their companionship regardless of whether anybody let anybody else go first.

This is one of those rare occasions where a social game DOES exist for the race, even if it doesn’t necessarily have much active bearing on the race’s outcome. What the green team has been missing up to this point is a sense that they’re in it together with the other teams — which is something that Tanner and Josh have excelled in cultivating. What would really boost the green team’s profile (and likely their spirits) is an opportunity to collaborate with someone else, just for a minute or two.

The optimal candidates of the remaining teams are probably the reporters. Logan and Chris are pretty far back there and can barely cooperate with each other, much less another team; Motherboy may still feel some loyalty to Texas for the Express Pass; and Texas and the Cheerleaders seem to continue to be their own tightly-wound coalition. It’s likely, though, that at some point on the course, the green team will find themselves at a Roadblock, near the front of the pack, alongside the likes of Joey or Kelsey, and it may make sense to say, “hey, let’s bang this out together and ensure that we’re both safe for another leg.” They have the most in common with Joey and Kelsey — similar backgrounds, similar relationship, similar racing prowess. And they’ll need to offer some kind of bargain that appears on its face to favor the reporters. (Given that Joey absolutely loves feeling like he’s playing both ends against the middle, there’s no way he’ll turn down an attractive bargain.) HERE is an opportunity where letting a team go ahead of you to the Roadblock judge could work to your advantage. It costs almost nothing if you’re neck and neck at 1 and 2, and it feels like a big gesture. The U-Turn also offers a chance to strike a bargain, if Justin and Diana can manage to avoid sounding magnanimous about it (although that is a big IF, since almost everyone sounds magnanimous when they’re talking about the U-Turn, as we saw at the last U-Turn).

Also, when it comes to brokering deals, Justin needs to get in the back seat and let Diana drive. It’ll sound more sincere coming from the less in-your-face, less pushy half of the partnership. If she can go in behind him and smooth the feathers he’s ruffled, she could be instrumental in rallying people to their side. Something to the effect of, “I know how Justin can get sometimes, believe me, but if it’s not us up there in the end, we’d really love to see it be you because X, Y, and Z.” After all, who’s more intimately familiar with how he can get than the woman who’s about to become contractually obligated to deal with him for the rest of her life? (Plus there’s no way Justin could get through that and sound genuine…but Diana might be able to manage it.)

I recognize that all of this is pretty fan-fictiony, and that it’s far more likely that Justin and Diana will remain lone wolves until the “team to beat” ultimately gets beaten, likely by the very team I’m suggesting they team up with, if I’m reading this edit correctly. But I’m trying to put myself in their shoes — something I think most of my fellow superfans have been kind of loath to do up to this point.