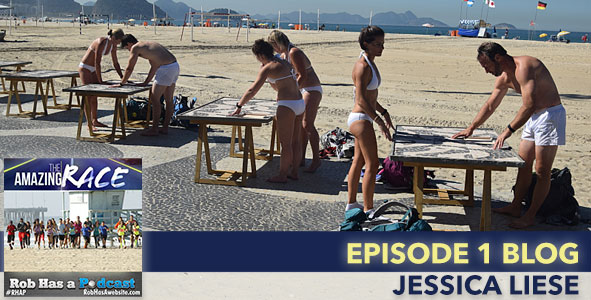 In thinking about how I wanted to kick off my blog coverage for Season 27, I realized something kind of germane to the process of blogging about this show: namely, we don’t really know a lot about these racers yet. The first episode of every season of this show is always crowded with team intros, a rush to the airport, and then 22 people all tripping all over each other not to be the first ones out.

But we can start to figure out, from watching them out on the course, what they’re doing here in the first place, and that might give us a look into what we’re going to see from them in the coming weeks.

When it comes to motivation, I think there are three distinct buckets into which you can put most, if not all, racers: are they here because they love competition, because they love the show, or because they love the experience? And obviously this is a vast overgeneralization — certainly two or even all three of the things are probably at least a little bit true for everyone on the show — but let’s start from here.

It’s harder to guess each team’s primary motivator than you’d think — for instance, who had Season 26 champ Tyler Adams pegged as a superfan? I sure didn’t until round about Peru when he started spouting strategy and making the types of observations that one can only glean from watching hours and hours of the show. But I’ll take a stab at it: 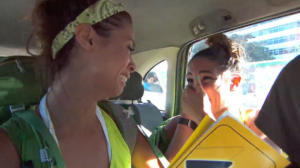 Something in their celebration style tells me they’ve come to compete.[/caption]

Folks who love competition: Tanner and Josh, who were allegedly recruited via social media, seem most motivated by racking up first-place finishes, and not just because they’ve racked one up already. I’d put elite athletes Jazmine and Danielle here, and Tiffany and Krista (although there’s a strong possibility that at least one of them is a big fan of the show as well). Yeah, the cheerleaders had a bit of a lackluster leg this week, but something in the way they celebrated finishing the puzzle tells me they are hungry.

I don’t mean to imply that the prospect of a million-dollar paycheck is the sole motivator for anyone, although you do frequently hear these teams talk about how they can taste the million dollars. But you also hear them talk about winning each individual leg, striking up rivalries, and how they’re tackling challenges.

Obviously teams who come to play are, generally speaking, the biggest threats to win, although it’s by no means a given that the competition will be dominated by people who compete for the sake of competing.

Folks who love the show: Obviously, you don’t propose to your lady with a fake version of a show you only kinda-sorta like, so Justin and Diana certainly fall under this category. Alex and Adam, James Earl and Denise, and the Chacs are also avowed superfans.

Is it unusual that more than a third of this cast are avowed TAR-aholics? You’d be surprised, actually.I’ve heard over and over that of the big three CBS shows, this is by far the most applied-to, and the one that people most want to be a part of, but that’s not frequently something we see the teams who are cast saying. This may be the first time this many teams have been shown effusively praising the show itself, which I find interesting in and of itself. Usually CBS reserves those soundbites for teams who don’t have any other story to tell. “Well, you’re the flirty girls, you’re the folks who’ve never been out of the country, you’re doing it for your loved one with a sob story, you’re the frontrunners…you guys? You can be the people who like the show.” And we’ve definitely discussed this before: this is why it appears that there’s a curse on superfans.

The one team I don’t get a great read on yet as far as whether they’re in it primarily for the love of the game or for the love of the show is Joey and Kelsey. So far they don’t seem quite as driven as the driven teams, but I don’t have a clear picture yet on how well they know the show, either. Certainly the two aren’t mutually exclusive; it could certainly be both things at once. Given their slightly gimmicky hook, there’s also a very VERY outside chance that they’re the third type…

Folks who are in it for the experience: Whether it’s the idea of a free trip to parts unknown or a bunch of great exposure on national TV, there are definitely some folks in the mix every season who wouldn’t have been able to pick Phil Keoghan out of a lineup six months ago, but who are along for the ride because it sounded like it’d be pretty cool (because obviously, it is!). Some of them talk a good game about the million dollars, but the money is secondary to the idea that they’re going to be racing around the world on a major network. Whichever half of that statement — racing around the world or on a major network — is more important to them.

I think you know where I’m heading with this. Kelly and Shevonne seemed far more concerned with getting in every last edgy soundbite, and with reinforcing their brand identity, than with actually competing. They never intended to win, although I’m sure they thought they’d go a little further than they did. (Nobody WANTS to be the first out, of course.) I’m guessing that this show was, for them, all about a great trip and a chance to show their snark off to a new audience. Unfortunately, this is probably the kindest and gentlest reality show on a major network, and their judgey comments kind of landed with a thud, if Twitter and message boards are to be believed. Most fans seem to be chalking their ouster up to karma in one way or another, leaving them with neither a boastworthy performance nor claim to the title of “fan favorites who went too soon.” No wonder they weren’t keen to do exit press.

I don’t feel great about Ernest and Jin’s chances either, mostly, at first, because I noted that they aren’t exactly dressed for an intense sprint to the mat (remember Season 25 Dennis and his jeans and button-down? that guy was a superfan, but he sure didn’t dress the part). They really feel like style over substance to me, and this was only a hunch on my part until I learned this week that this is not E-Knock’s first reality show. It’s not even his second. And he’s already training hard for his fourth. What should I conclude from this, other than that The Amazing Race is just another whistle stop on the dancers’ climb to fame?

Which isn’t to say that they can’t be entertaining in the process (I mean, all three of those videos are pretty amazing), or that a team like this can’t go far. Certainly many of them do, and many of them are great characters. And it isn’t to say that I, personally, don’t find the dancers entertaining, because I certainly do think they’re good television. I think that like all fish out of water teams, they have the potential to offer a really unique perspective on the new parts of the world that they’re about to experience. But despite their soundbites about what the money would mean to them, I just don’t believe that winning the whole shebang is their first concern.

I’m very much looking forward to getting to know these teams better and finding out if I’m right or wrong about them. Being right is vindicating, but being wrong just makes things that much more unpredictable. Really, it’s a win-win.