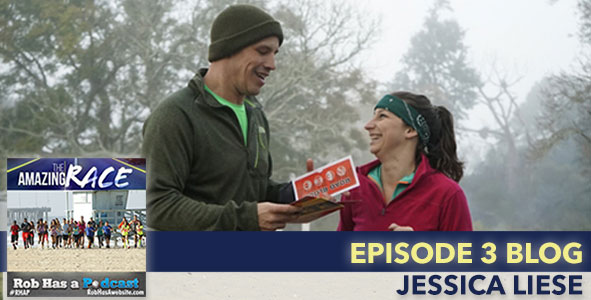 We have covered the (nonexistent) curse of the superfan in the past, possibly ad nauseam. And I think I’ve made clear a few times that it’s not that each season has A superfan, it’s just that other aspects of most racers’ approach to the game make for better television. The show has to condense at least 24 hours’ worth of footage of up to 22 different people into 42 minutes; you’ll forgive the editors if they don’t tally up who watched the show before, and how much of it they saw.

But every so often, the editors let slip that someone’s a superfan, and it’s never been more egregious than it was this week, when Justin admitted — without a trace of hyperbole — that he’s seen every season of the show three times. 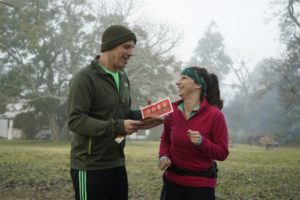 While this may not be the first instance in which someone’s obsessive Amazing Race watching habits helped them to get ahead, I think it IS the first time — or close to it — that said habits have been explicitly cited on air as such.  In the past, whenever a racer tells us they’ve seen every season, it’s looked a lot more like Alex and Adam’s portrayal as fans: going on the show is a dream come true, and they’re grateful to be there for as long as they ARE there. Rarely has a genuinely good-at-racing team explicitly cited their show-watching habits as a reason they’re good. The implication is that hopping on a treadmill and picking up a world atlas might function as better preparation than sitting on your ass watching television…so to have it acknowledged that you can learn a lot about the show by, you know, watching it? Is very refreshing.

And to be clear, I’m not 100% Team Green in this rivalry — I do find Justin annoying at times, the same way I frequently found the Afghanimals annoying. He’s playing to the camera way too hard, and I am fairly certain his ideal endgame involves not just winning the million, but also catching the eye of someone in the entertainment field and using The Amazing Race as a springboard to something better. I also get the impression that while Diana loves the show as much as he does, she would never have gone on the show with anybody but him. But I also believe Justin is telling the truth when he tells us how excited he is to be there, and that he obsessively watched every season of the show not just as preparation to compete, but because there’s nothing else he’d rather be doing. (And I’d imagine this combination of obsession, dedication, and sheer knowledge WOULD intimidate Tanner and Josh, given that I’m equally certain their first exposure to TAR was the DVDs CBS gave them to watch during the casting process.)

But we’ve seen before that knowing a lot of trivia about the show doesn’t necessarily give you a leg up on other teams. Rote knowledge only takes you so far. The key to actually deriving useful information out of an obsessive rewatch of many hundreds of hours of television lies in how you watch it.

Plenty of folks out in the world of Amazing Race fans watch, and re-watch, and re-watch, the show and believe that being able to cite chapter and verse about who got eliminated when, and what task took place where, is the same thing as having insight on how the show works and, it follows, on how to run the race. But knowing what and where — and I say this as someone who lives and breathes trivia — doesn’t necessarily enhance your understanding of how and why.

In other words, look to Bloom’s Taxonomy. Knowledge isn’t enough here: you need to analyze and evaluate. (And it’s also true of Survivor — did Max Dawson’s ability to cite the zodiac signs of every past Survivor winner help him do well on the show? Nope. In fact, his trivia-spouting ways — and his inability to sense that he wasn’t impressing people with them — might have actually contributed to his downfall.)

The more interesting quote tonight than Justin’s assertion that he’s watched every season three times is what he said when they hit the Pit Stop mat — he said he’d taken note of mistakes each past racer made, and the reasons they were eliminated, in a bid to avoid those mistakes. I think he’s well aware that some situations are completely unavoidable, but this is a team who is definitely not going out because one of them can’t drive a stick shift or didn’t read a clue. Now, granted, this is the same team who very nearly made a game-ending error in the first episode, so they’re not immune to making mistakes; I just think that they’re probably the rare team who learned all the right things from watching this show, and who knows exactly how to apply what they’ve learned.

So if I’m Justin, taking notes on this episode on my third viewing, what am I noting as the major takeaways from Ernest and Jin’s elimination? (In fairness, I generally only watch each episode twice — once immediately before the podcast and once immediately after it — so maybe I could have a better idea if I gave it a third shot.)

Well, the actual amount of culpability involved here is difficult to determine. What makes legs like this hard to analyze is the fact that nothing the dancers did in this leg actually appeared to impact their placement. Given that they never saw another team that day, Ernest and Jin might have been doomed from the moment they ripped open the first clue.

If we go back to the previous leg, I might be able to pinpoint a slight lack of urgency stemming from the fact that they weren’t the last team to leave the task. Perhaps since they left that Roadblock in 8th place, they assumed they had a comfortable enough lead on the other teams that not only would they not be in last, but they’d be starting the next leg in some place other than last. Unfortunately, while Adam and Alex got a terrible cab, Ernest and Jin got a pretty bad one — bad enough to let Jazmine and Danielle jump up two places in the rankings and get far enough ahead that they could make it onto an earlier bus with the rest of the crowd the next morning. Frequently racers are screwed by a handful of minutes bled away during a bad cab ride or a wrong turn; it’s just that they don’t usually have to wait an entire leg to bear the consequences of those few minutes. (It could be argued that this is the same fate suffered by Jonathan and Harley last season.)

Sometimes a few minutes don’t matter; sometimes they’re a team’s undoing, and it’s hard to tell in the moment which situation you have on your hands. So to mitigate that random chance, you have to do everything you can to minimize even those few minutes. This is not the last time that random chance will play a leg this season, I’d wager…which is something that you can’t totally conquer no matter how many times you watch the series.