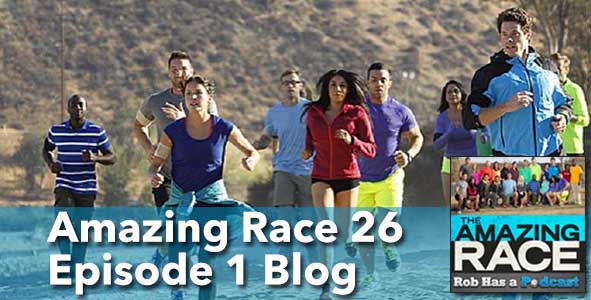 I’ve talked before about the most important factors to consider when you’re choosing your ideal Amazing Race partner — how the particular dynamic with someone, no matter how close you are in real life, can give you baggage you didn’t account for once you hit the Race.

But how the hell do you plan for being paired up with a total stranger?

You all know I’m not crazy about the blind date twist, but I have to hand it to CBS — it has certainly raised some interesting new quandaries for the racers involved.

You’re not off the hook, CBS — this was still one of the weakest season premieres of a show that is known for having pretty weak season premieres — but I grudgingly admit that the sociology of it all is a little intriguing. Had they done ALL blind date teams, or just ONE (ala Season 5 of The Biggest Loser), that might still have been better, but this twist isn’t totally killing my desire to find out what happens. Yet.

So what’s the takeaway? Here are a few lessons we can learn from our Season 26 blind daters — and they probably also have some application if you DO know your teammate already. 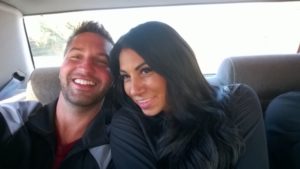 Respect your partner’s strengths and weaknesses. It’s highly probable that if Jackie, a Vegas showgirl and former Miami Heat cheerleader, had been left to her own devices, she’d have been all over the Syncing Steps Detour option. But Jeff was clear about it: he sucked at dancing, and it’d be suicide to try a dancing task that both of them had to do. It was pure luck that the sake task turned out to be a lot easier, but it’s safe to say that no matter what it was, it was probably better for the team to try that one over the dancing.

Keep your eye on the prize. Jelani and Jenny struck me as the kind of team who’d end up hating each other, but there was a factor I completely missed: how badly these two want to succeed. As attorneys and entrepreneurs, Jelani and Jenny have incredible drive and focus. They snatched that Express Pass right out from under Jeff and Jackie’s noses by paying close attention to their clue and devising a game plan. Whether or not these two wind up ever speaking to each other again after the race, they have a common goal right now and they’re not about to let the stress of being on a game show with a stranger get in their way. (In fact, it might even be a plus to be running the race with a stranger who wants to win as much as you do over a friend, relative, or partner who has to be convinced to indulge your love for the show.) I don’t know how long they can keep up the gamebot facade, but they’re off to a great start.

Be content with your lot, and open to whatever happens. By leg two, as we see in the previews, both Jenny and Laura are jokingly proclaiming their partners to be the smartest men alive. They’re kidding around with each other AND with their partners, and they’re not at all concerned with what it all capital-M Means. Kurt and Bergen are already saying that whether or not they wind up falling in love, they do think they’ll be great friends. (And hey, great friends win this race too! Just ask Amy and Maya, Nat and Kat, BJ and Tyler, Rob and Brennan…)

Conversely, it’s pretty clear that early on, Blair was a little underwhelmed by his choice of partner. Hayley’s high-maintenance perkiness didn’t fit his picture of what an ideal life partner would be, and as a result, he’s not taking her seriously as a RACE partner. She knew they were going the wrong direction well before he did, and he just didn’t seem to be listening. This does not bode well for their continued success as Racers, so I’m not sure they’ll have time to get there, but I must grudgingly admit that whether or not romance blooms, it would be a hell of a great character arc to watch Blair gradually begin to take Hayley more and more seriously over time.

Which isn’t to put all the blame on Blair here. Hayley, too, has it a little too backwards that succeeding on the Race involves succeeding at this relationship. As a result, she keeps trying and trying to get Blair on her side, and that’s not endearing her to Blair. One of these two needs to step up and say, “look, we don’t have to jump each other’s bones, but we DO have to run this race together.”

(Although I acknowledge that we need SOMEONE to make these kinds of social missteps. If we had 11 teams of Jelani-and-Jennys, the show would be pretty godawful boring.)

If “how well you know your partner” was really the sole benchmark for successful racing teams, we certainly wouldn’t have seen the team that’s known each other the longest by a country mile wind up going out first, and badly. Jeff and Lyda’s love for one another and comfort level with one another weren’t in doubt. Jeff’s inability to perform the dance, coupled with the fact that the #FlightCrew appears to have gotten on the slow train out of Narita, were the true culprits here.

Yes, you need to at least LIKE your partner, and you need to LISTEN to them, but that’s not the same thing as loving them forever and ever.

(Incidentally, “The Slow Train out of Narita” is the title of my next espionage thriller.)

Even if the sake task is a 30-minute cab ride away, the cab driver isn’t 100% sure how to get there, and the task itself takes you an hour, you’re still saving time over the four hours it was taking to finish Syncing Steps. There was a point of no return past which it wasn’t going to matter WHAT they did, but I think they could have seen it coming.

Surprisingly enough, the second-worst team in the race was the team who’s known each other second-longest. If CJ and Libby are already getting this lost in a major world city full of English speakers, they stand absolutely no chance in a remote village where street names aren’t labeled and nobody speaks their language.

Thank goodness we have Harley and Jonathan to restore our faith in lasting love as a barometer for good race performance, is all I’m saying. They got a little bit lost, but overall they were solid (dare I say they were …hangin’ tough?), and Jon’s bashfulness is so adorable I can hardly stand it. (My inner 11-year-old remembers this feeling well.)

The remaining three teams (Hairstylists, Truck Stop, and Sochi) have all been dating for approximately the same amount of time — six or seven months — which, I’d guess, doesn’t actually give you THAT much of an edge over someone you just met that day, if the blind-daters are committed to racing first and drama second (which, as we’ve covered, most of them are). And indeed, while these three teams all seemed affectionate ENOUGH, they didn’t seem particularly tuned in to one another yet, at least no moreso than, say, Jelani and Jenny or Tyler and Laura are. Six to seven months is still enough time that you might still be self-conscious around your partner, or even still trying to impress them a little. If you still can’t poop in your significant other’s bathroom, you may not be wholly ready to Race. And I’m not sure all of these people can. I’m just saying.

(By the way, I find it endlessly interesting that this is the length of relationship that CBS settled on as a benchmark. Have they been reading Barney Stinson’s playbook? “Relationships are like freeways, freeways have exits, so do relationships. The first exit, my personal favorite is 6 hours in, you meet, you talk, you have sex, you exit while she’s in the shower. The next exits are; 4 days, 3 weeks, 7 months, a year and a half, 18 years, and the last exit, death, which if you’ve been dating the same woman your whole life, it’s like ‘are we there yet?'”)

Of the three newly-daters, Aly and Steve seemed like the most competent, and possibly also the goofiest, which makes me hope they go further. (You might have missed the great moment where Steve leapt onto the U-Turn mat, proclaiming, “WE ARE HERE!”. I cracked up and I don’t even fully know why.) Matt and Ashley dropped from the front of the pack to the back with astonishing haste this leg, which doesn’t mean they can’t run a great race (don’t forget, Jason and Amy came in 8th place on their first leg!), but they’re going to need to step it up.

Which brings us to Rochelle and Mike. While they’re not the ultimate crowd-pleasers I predicted them to be right out of the gate, they’re charming enough, and they seem to have a good grasp on strategy. I don’t hate that use of the U-Turn — they had no way of knowing they were going to jump up three places in the standings between the U-Turn board and the Pit Stop. Plus, so far they’ve been extremely supportive, tenacious, and willing to roll with the punches. If they can find a little extra drive, and get a little lucky, we’ll be seeing more of them (and their poorly-thought-out hashtag…can’t we just stick with #SmallTownSweethearts, which is what they picked for themselves?).

I’ll definitely be looking forward to next week, when the Race appears to start in earnest — multiple tasks, multiple locations, and hopefully multiple points to ponder.