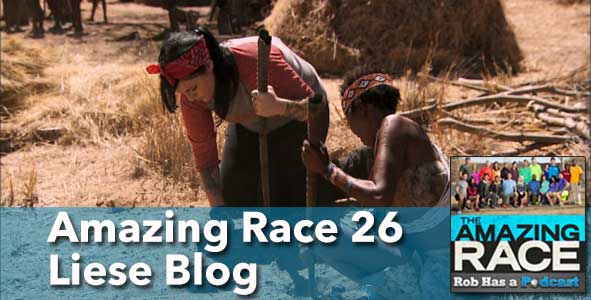 All season long, the Facebook group “Previously On Survivor” has had a recurring feature where they post a picture of a current cast member (usually one widely regarded to be either terrible at the game or getting a terrible edit) and call for all of the reasons this person could win the game. Generally speaking, it’s pure fan fiction at best and gets derailed into off-topic slams at worst, but it’s an interesting idea, and now that we’re down to the final five, I’m going to brazenly steal it, but with an added twist: let’s compare the five remaining teams to previous winners. Each of these teams has what it takes to win, if you ask me, and their wins, if they come to pass, might look oddly familiar.

Laura and Tyler/Jason and Amy (Season 23): As I said on the podcast last night, the fact that it took this allegedly strong team this long to snag a leg win is what sparks the comparison. Rochelle and Mike won a leg. Kurt and Bergen won a leg. And Laura and Tyler came close, but couldn’t quite get there until now.

Laura and Tyler = the new Jason and Amy?[/caption]

Jason and Amy had the same story, almost down to the “barely know each other” element! They’d been dating less than a year when they were cast for the show, but they appeared to have a natural rapport that kept them near the top of the pack most weeks, and they were never out of the conversation when Rob and I talked about who had the best shot at winning the whole thing. And obviously, personality quirks don’t have much bearing on who wins the Race and who doesn’t, but like Jason, Tyler’s an incredibly sweet, sort of dense guy who’s inadvertently said a couple of insensitive things, and Laura’s the book-smart, worldly gal who keeps him in check. (I doubt there’s a “Santa Monica Laura” hidden where “Providence Amy” would be, but they haven’t really been tested in a way that would facilitate that yet.) Late-stage victories could certainly pave the way to a Laura and Tyler win, and it wouldn’t seem totally illogical. A Laura/Tyler relationship wouldn’t seem totally illogical after all of this either, but the feasibility of that remains to be seen.

(Congrats, by the way, to Jason and Amy, who are in the Caribbean prepping for their destination wedding as I type this.)

Mike and Rochelle/Amy and Maya (Season 25): I’m sure you thought I was going to say the Beekman Boys here. And as much as I love Brent and Josh, even I have to admit that theirs is still the gold standard in inexplicable dark horse Race wins. But last season, everyone was saying that Amy and Maya were the new Beekmans, and a little unfairly so, if you ask me. No, they weren’t the strongest, but they didn’t have to rely on an 11-hour equalizing layover to get back into the game after a flight snafu. They were dark horses, but they were never totally out of the running, and when a couple of tasks favored their swimming and memory skills on the final leg, it was game over for the other teams.

So it is with Mike and Rochelle. No way could we say they’re the strongest team out there. Their patchy Race record shows that. But they’re not getting the credit they deserve. A lot of people are confusing Rochelle’s non-Barbie-doll physique for being out of shape, and it’s patently untrue. Rochelle’s a derby girl, and roller derby is no joke. I’d argue that she’s the strongest lady left in the Race. Mike’s not exactly in fighting shape, but he’s hanging in there. Too many fans are looking at the fact that half the time, they’re in actual danger of being eliminated and ignoring the fact that the other half of the time, they’re finishing near the front of the pack. It’s easy to take a single look at them, decide they don’t fit the profile of a dominant team, and dismiss their chances out of hand. I wouldn’t count them out, especially since Rochelle’s engineer skills could prove very useful if the final leg involves a logic or memory task.

(I do think the “It’s time for us to take the next step” confessional was a little transparent, though. Too many teams have some relationship milestone that they think the show is going to bring about, and most of those teams are going to get there anyway without having an artificial turning point forced on them for the sake of narrative arcs. Rochelle’s son is old enough to watch the show and have a pretty good idea of what’s going on, so either way, he “met” Mike one way or another back in February when the show premiered.)

Jelani and Jenny/Eric and Danielle (Season 11): For many years, Eric and Danielle were the closest thing we had to a Blind Date team. They HAD hooked up after Season 9 wrapped, but even though that had lasted all of ten seconds, they offered to keep up pretenses so that Amazing Race: All-Stars could bring a new dynamic to the table. Honestly, it WAS a pretty interesting idea in theory. Nobody predicted that the “Frankenteam” would make it all the way to the end.

Like Eric and Danielle, Jelani and Jenny had no actual intention of getting together romantically, but both teams really wanted that million dollars. Also like Eric and Danielle, Jelani and Jenny are not really perceived as a threat. After a couple of early successes, they’ve largely faded into the background. They argue, but they don’t argue like Blair and Hayley. They’re good, but they’re not quite as good as Laura and Tyler. They’re supportive, but they’re not quite as supportive as Matt and Ashley. What are they bringing to the table that’s unique? Nothing, really. (Which is probably the editors’ fault more than theirs.)

This is not the team that has a significant fanbase behind it. While there’s no Danny and Oswald or beauty queens to galvanize the masses (most of those folks ditched this show a long time ago), most of the remaining diehards aren’t actively rooting for Jenny and Jelani. I do have to admit, though — if they pull out the win, it won’t totally ruin the season like Eric and Danielle’s almost did in Season 11.

Matt and Ashley/TK and Rachel (Season 12): On the surface, a pair of bodybuilding hairdressers and a young hippie couple probably don’t have all that much in common, but Mashley’s victory would look a lot like this couple’s, for a few reasons. Mainly, they’re not quite dark horses, but they’re close. TK and Rachel were a nearly invisible team for a lot of legs in Season 12, dwarfed by huge personalities like Christina and Ron, Kynt and Vyxsin, and Nate and Jen. Along the way, though, they crept up into the top tier, overcame a multi-hour delay, and stealthily took the trophy.

Newly engaged Matt and Ashley failed to impress early on, but there’s not a lot they’ve done wrong since those first few legs.  They’re definitely contenders, even if there are far more visible teams in the mix.

I’ll tell you the exact moment I got on board with Team Mashley: last week in Monaco, as Ashley walked the tightrope, Matt’s encouraging words of “come to your boyf… come to your fiance!” They’re still in that stage of engagement where they keep forgetting they’re engaged, then remembering it, then being excited by it all over again, and it’s completely adorable.

Blair and Hayley/Dave and Rachel (Season 20): We’ve previously discussed Flo and Zach as we compared and contrasted them with Blair and Hayley, but I think there’s a much more analogous team to Blayley in Dave and Rachel. (And no, it’s got nothing to do with the fact that Hayley and Rachel could be sisters, so much so that early spoilers wondered if Rachel was actually returning with a new partner.) Obviously, they’re nowhere near as dominant as Dave and Rachel were, but one thing that usually gets lost in Dave and Rachel’s legacy is the fact that one member of the team never, ever, EVER shut up for the entire duration of the Race. One member knew beyond a shadow of a doubt that they were right about the best route to take, the best way to finish a task, the best strategy to win the million dollars…and they made sure that their partner knew it, Phil knew it, and the viewing public at large knew it.

The fact that in Dave and Rachel’s case, the vocal team member was the male half of the couple is irrelevant; it was annoying when Dave did it and it’s definitely annoying when Hayley does it. And the way they speak to one another meant bad things for the future of the relationship in both cases. But like Dave, Hayley’s frequently correct, even when she isn’t voicing it in the most productive way. And like Rachel, Blair has figured out how to handle his partner, or at least shut her out when he needs to focus. Make no mistake: Blair and Hayley WANT to win. And from where I sit, their chances are looking pretty good.

But before I sign off, let’s pour one out for Aly and Steve, a team who definitely seemed like contenders up until this week, when one minor setback seemed to set off a chain reaction of mishaps leading to their ultimate demise. They’re hardly alone in this, though — there have been many teams who can’t seem to come back from one tiny mishap. If you’re not tested early on, you sometimes get a false sense of complacency when it comes to this game, and it leaves you ill-equipped to handle an actual setback.

I think this does point to one truth that we can’t ignore: The Amazing Race is difficult in ways that prove daunting even for Olympic athletes. (Just ask Spooner and Mikkelson.) I think it’s hard for any of us who’ve never done it to fully gauge the physical and emotional toll of the show. Obviously, that doesn’t stop me from trying, but I admit that I don’t fully know what it’s like, and I likely never will.