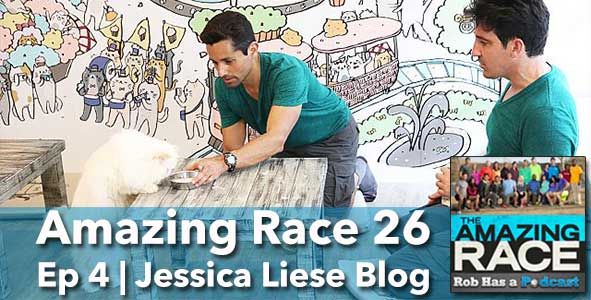 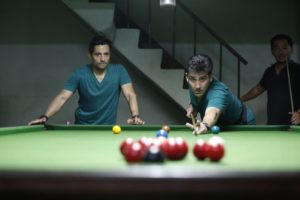 Jon and Harley didn’t have a shot.[/caption]

I don’t think it was poor racing that did in Jonathan and Harley, and anytime circumstances, rather than racers, take a team out, that’s hard to watch.

But it’s extra hard to watch when a team goes out through no fault of their own and it drags out over not just one, but two episodes.

Sadly, Jonathan and Harley basically had no prayer of catching up from the moment they couldn’t make a night flight to Phuket. Those of you crying “fix!” when they saw that overnight layover last week should note that most of the teams got a departure time that was well before Jonathan and Harley even landed the next morning. That race leg was designed for a huge disparity in arrival times, for sure, but …not quite that huge.

Last week, #TeamNewKid checked in a good two hours behind ALL of the other teams, and this week, once again, everyone else had boarded a flight well before they even got to the airport. And so, a full week later, the results of that one bad flight are finally dragged out to their bitter conclusion. There was really nothing else they could have done.

I’m obviously not suggesting that the course needed to be rigged to give this specific team a leg up (I mean, Jonathan IS my favorite New Kid, but still…). But I do think it may have been a more satisfying episode if they’d had anything resembling a fighting chance. I think there needed to be at least one task that was going to take a little bit of strategic thinking or physical exertion, just so that a team who was far behind on the previous leg could theoretically have gotten back into the mix. Instead we got largely spoonfed travel between a few bite-size tasks designed to showcase a location more than any racer’s strengths.

Can you imagine ANY of these racers getting completely tangled up in one of these tasks? Can you see someone sitting there with their hundred-year-old egg, totally unable to take a bite, or taking snooker shot after snooker shot, or standing paralyzed at the doorway to the cat cafe? Of course not. We don’t need a Season 3 haystack incident every episode, or even every season, but if the potential for a haystack incident is there, you can’t argue that it makes the show more compelling.

We say anything can happen on the Amazing Race, but the sad fact is, I don’t think that’s always true anymore. It certainly wasn’t true here. Observe that this week and last, every single team but one checked in within minutes of each other. It’s not as egregious as it was during Season 24, and at least there was a fair amount of place-order shuffling among the other teams (unlike season 24), but the time-shaving, and the cost-cutting, are as sadly evident here as they were during that horrible, horrible season, and this season’s storyline is suffering as a result.

This can’t keep happening if the show wants to pretend the race is even remotely as difficult as it was in its heyday. If it’s just that the teams are all that good, then the tasks need to get stepped up accordingly.

Thankfully, though, there was at least one other point of controversy worth discussing in Friday’s episode. While searching for the “Metal Castle,” Jelani and Jenny initially said they’d hoof it with Matt and Ashley, but as soon as they found a cab driver who knew they were talking about, they hopped into a taxi and peaced on outta there.

This was a sticking point for not just Matt and Ashley, but for Jelani and Jenny themselves, who disagreed on whether this was a good idea. Honestly, I’m with Jelani — it was a little bit unnecessary when they knew neither team was in any danger — but Jenny has the right idea in that the word “race” is right there in the title, and sometimes you have to go to extraordinary lengths to get ahead. I’m on Team Jelani ONLY because everyone was well aware that if you weren’t on a team containing a member of a popular 90s boy band, you weren’t going anywhere this leg. When they ditched Matt and Ashley, all it accomplished was making them mad and potentially putting up a big U-Turn shaped target. But if there’s an actual elimination on the table, all bets are off.

With three weeks between now and the next time I’ll have analysis for Rob Has a Website, I wish I had some deeper wisdom to impart about any of the other teams, but it seems none of them have learned any meaningful lessons that they hadn’t quite gotten to on the previous leg.

Blair and Hayley have made zero progress in the communication department, Jeff/Jackie and Tyler/Laura continue to make glacial progress in the romance department, and Kurt/Bergen, Team Truck Stop, and Team Olympics seem to continue to be competent teams who don’t make many mistakes (though Rochelle gets an MVP award this week for not only being the only woman to complete the Roadblock, but also totally destroying most of the competition in the process).

Who’s the least valuable player this week? CB-freakin-S. There’s no show that would be helped at all by a two-week hiatus, but due to the narrative structure of the show, this one in particular is going to suffer at the hands of March Madness. The ratings have been more or less holding steady up to this point but I can’t see any universe in which some of that audience ISN’T going to forget all about TAR during its hiatus. I doubt there’s much that can be done, but let the record show: I’m not a fan.