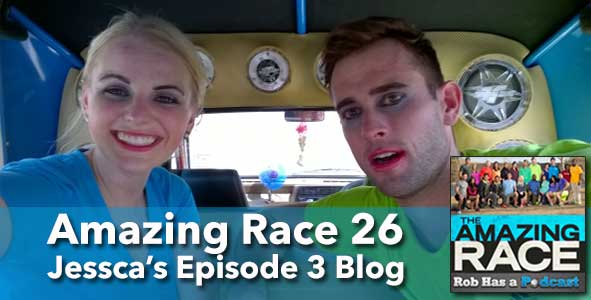 When we’re having a disagreement about something, my husband and I frequently make reference to Douglas Adams, who wrote in The Hitchhiker’s Guide to the Galaxy” that he’d rather be happy than right (Kip’s favorite retort to this: “being right would make me happy”). In life, as on The Amazing Race, being stuck on being right will make you miserable. Sometimes, instead of insisting that everyone around you acknowledge your rightness, you have to just swallow your pride and keep on truckin’. 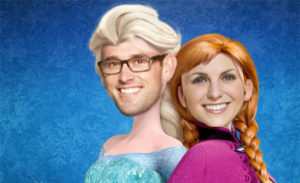 Blair and Hayley need to Let It Go.[/caption]

Up on the ziplines, Blair saw Jelani and Jenny grab one food item each and hit the zips, and he assumed that he could just crib off of them. Hayley suspected they were doing the task incorrectly, and in the end, she was correct — they HAD missed something important. At that point, the right move for Blayley is to do the task correctly and move on.

The right move for Blair? Acknowledge the error and actually listen to his partner going forward. Twice so far we’ve seen him give her the brush-off when she actually had the right idea, and he seems fairly reluctant to cede any ground to her.

Flexibility is the name of the game, and while this week was Blair and Hayley’s best showing so far, they won’t be able to keep up that momentum if they keep being bogged down by her need to have the high ground. Yes, you’re right…but the knowledge of your rightness might be all the satisfaction you get.

Editing always plays a role, of course, and secret scenes reveal that a similar conversation was going on between Jelani and Jenny, who made the same mistake. For all we know, #TheLegalTeam had the same kinds of conversation after the fact but it doesn’t fit their story. Or, maybe more likely, they had that conversation once and it took them 30 seconds as opposed to Blair and Hayley, who appeared to have the same conversation four or five times over the course of the leg. Blair needs to listen, and if he doesn’t, Hayley needs to move on.

I’m not going to say I was thrilled to see Jelani and Jenny drop out of first place this week, but I did quite like seeing some of the bottom-of-the-pack teams demonstrate that there really isn’t a lot of cannon fodder in this season. After Jeff and Lyda, whose age might have slowed them down, and CJ and Libby, who didn’t seem to have any sense of urgency in a show that’s about racing, we are already down to nine teams who all might have the potential to pull out a win. While these tasks certainly could have been a little more balanced (not to mention a little bit less similar to the first leg in one memorable case), they did call upon communication skills and attention to detail in some new ways that allowed a couple of new teams to shine, thus allaying my fears that the same small handful of teams would steamroll over everyone else.

I also think it would be fairly easy to say that this leg was a bit too easy — perhaps comparable to Season 24’s second China leg — given that almost all the teams checked in within seconds of each other, but I’ll give them a pass because it wasn’t quite like all of the teams were within sight of each other at all times. Jeff/Jackie and Steve/Aly lost a lot of time by trying the wakeboarding Detour first, but they are such great racers that they caught right back up t0 the teams who had had trouble with the zipline half of the Detour — and, in Steve and Aly’s case, even managed to pass a few. Plus, Rochelle and Mike — one of only two teams who didn’t check in all in one big bunch — reaped a reward for running a perfect leg.

My Least Valuable Players this week are the Race course designers, who are apparently following the Season 24 formula of “two legs per country” this season. I thought Season 25 signaled a return to form in this regard, but now we’re right back there with the threadbare seams of a cheap, cheap season showing through all the Race action. I don’t mind it occasionally, and at least they’re minimally trying to make the legs feel different, but we’re going into leg four next week having only visited two countries, and that fact really could not be more obvious.

However, I don’t fault them for placing a non-elimination leg so early on, nor do I necessarily think it was rigged to keep the gimmicky celebrity team. As I said in the recap podcast, non-elimination legs can’t be in the same place every season or teams will come to anticipate them accordingly. The purpose of the non-elimination legs is to ensure that all the teams will run out the leg. How irritating is it when you know for a fact that the last-place team a) is always in last place, b) is well aware of it, and c) has absolutely no hope of staying in the race? It’s virtually impossible to edit around that in order to maintain suspense. The idea that you might not be totally screwed has kept many a team afloat.

As for Jon and Harley, it would indeed have been heartbreaking to see them go out because of bad flight luck whether or not one of them was in a boy band once upon a time. There wasn’t much they could have done differently here, which would have made it rough to watch them get eliminated so early. Of all the times to be saved by a non-elimination leg, this is one of the more satisfying ones.