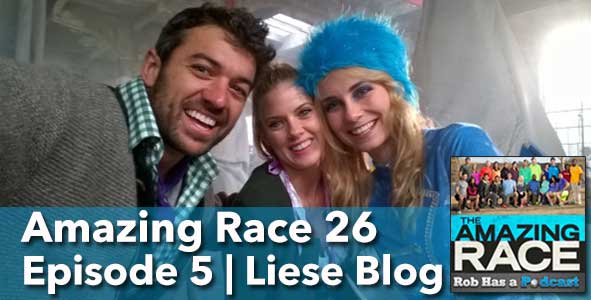 This week, let’s do something different. Let’s hop into the TAR time machine and head all the way back to 2002. Justin Timberlake was still rockin’ the frosted tips, all the cool girls paired low-rise flares with Avril Lavigne neckties, and all of TAR fandom was talking about Flo.

Flo was, up to that point (and far beyond), widely regarded as the very last person you’d ever want as your race partner, and for years, whenever a disappointing, irritating, or inexplicable team won their season, you’d say, “well, at least it’s better than Flo and Zach.” Most fans were pulling for snarky brothers Ken and Gerard, young dating couple John Vito and Jill, or even super-intense oldsters Teri and Ian…but in the final stretch, most were absolutely certain someone as defeatist and emotional as Flo couldn’t possibly win — and they were wrong. 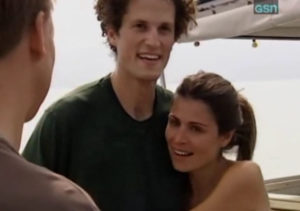 One of TAR’s most memorable teams of all time. Who’s the Flo-iest racer this season?[/caption]

For a long time, it was something of an insult to compare a racer to Flo, and something a TAR columnist wouldn’t generally do. But a lot has happened since then, and also I’m pretty sure most of these Racers have no idea who Flo even is, so I feel okay about drawing a couple of comparisons.

While digging through old episodes from Season 3 this weekend, something interesting struck me. (I mean, apart from the fact that Season 3 episodes would routinely spend 20 minutes in the airport and still manage to cram a Roadblock, a Detour, and a Fast Forward into the episode.) (And apart from the fact that tucked-in t-shirts are really not a good look for Phil.) 90% of the time, Flo is not actually that bad. She’s a little strident and opinionated, but Zach’s so laid back, I’d imagine it would be hard not to be sometimes. Unfortunately, that other 10%…well, you’re not really misremembering her. When the chips are down, Flo falls apart. She flings Race props around, she sobs, she threatens to quit. Zach tolerates her with saintlike patience, even after she starts up a heavy flirtation with another racer midway through the season.

So who is the Flo of this Race? Hayley, right? Wrong.

In terms of frequency of vocal criticism and complaint, Hayley’s got Flo beat. That’s right — Hayley is actually worse than Flo at this one thing. Hayley doesn’t wait until things aren’t going their way to start complaining. In fact, it’s entirely possible that between the last leg and this one, she never actually stopped. But the difference between Hayley and Flo is that all of Hayley’s complaints are actually intended, at least, to maximize her team’s chances of winning. Where Flo tended to shut down entirely when things didn’t go their way, Hayley’s attitude doesn’t seem to change much whether things are going well for her team or not. Hayley is a constant — an unpleasant constant, perhaps, but a constant no less. And I think that makes Blair a little better able to shut her out and keep racing, especially since Hayley is at least as committed as he is to their success…she just has a weird way of showing it. (I also think the editors are much more heavy-handed than they might have been a decade-plus ago…but it’s still true that they can’t air it if you don’t do it.)

So in terms of actual obstacle to Race success, who’s the Flo-iest person on the show in many seasons? That crown goes to Kurt, who, like Flo at several points in her season, simultaneously did not want the Race to be over and did not want to continue racing. But unlike Zach, Bergen just wasn’t equipped to drag his partner across the final finish line.

I’m not saying Bergen is equally at fault here. He clearly wanted to be there more, and it seems pretty obvious that he was trying to get where they needed to be, and in a way that would keep his partner on board with the concept.

There are actually a couple of interesting parallels here. Like Zach, Bergen entered the race thinking there was a possibility that he might find love, only to realize shortly after starting that there was absolutely no chance whatsoever of that happening. And like Zach, once the team got a taste of success, and winning seemed possible, Bergen was ready to kick it into high gear where his partner may not have been.

But it’s Bergen’s inability to tap into his inner Zach that ended up being the difference between staying in the Race and getting kicked out. And I totally get that if you’re racing with someone you don’t know very well, you need to be a little more accommodating, a little more placating. But at the point where Kurt was insisting that they break the rules and abandon their car, that’s when Bergen needed to overrule him. I guess we can’t all be Zach when it counts. And it’s entirely possible it wouldn’t have made a difference in the end.  I think the real enemy here is whoever thought up this Blind Date idea in the first place, but then, I’ve been saying that all along.

So let’s switch gears now, and talk about another season from the annals of Amazing Race history. This time, let’s go to one that the show sometimes even still acknowledges. (You guys think Survivor’s recency bias is bad…)  I want to take you back to Season 18.

On their way out of a task in the Japanese countryside, Flight Time and Big Easy accidentally grabbed Ron and Christina’s bag instead of their own, and instead of replacing it exactly where they found it at the top of a mountain, they returned it to the changing room at the base of the mountain, which earned them a 30-minute penalty.

This week, another team accidentally laid hands on an Amazing Fanny Pack that was not their own, and I’m sure if they are at all familiar with any previous seasons (which is of course up for debate considering this cast), the Globetrotters’ situation crossed their minds. If Jackie and Jeff had moved the bag at all, they would have opened themselves up to taking a similar penalty. But that doesn’t mean they HAVE to hand it over to Tyler and Laura. They can leave it in the back seat of the car, which was where Tyler and Laura left it, but anything else other than handing it to them directly might have opened them up to a possible penalty.

That said, it probably wouldn’t have been the worst idea to just hand them the fanny pack, especially considering that both Jeff and Jackie seem to be pretty terrible liars, but knowing that they’d already lost a ton of time due to a huge blow-up earlier, and not knowing that at least two teams (Kurt and Bergen and Mike and Rochelle) did some vastly dumber things and were therefore far behind them, I think they played this correctly. Feigning ignorance, but leaving their car doors unlocked so as to not impede access to the fanny pack, kept them from being at all complicit in the fanny pack’s misplacement, but it was still the absolute bare minimum. It would suck to go out of your way to help a team and then get eliminated because of it, but it would suck more NOT to help them, get assessed a penalty, and then get eliminated because of THAT.

It’s pretty clear that we’re now entering the phase of the Race in which relationships are going to be tested. There’s been enough travel that Killer Fatigue is a factor, and there are fewer teams left, therefore less margin for error. People are gradually dropping their “best behavior” (or, like Hayley, dropping it all at once) and it’s at this point that knowing how to handle your partner is going to be a crucial skill. Some Blind Date teams, like Tyler and Laura, seem to grasp this innately. Others, like Jackie and Jeff (and Jelani and Jenny), seem to be figuring it out after a little trial and error. But it seems like after this leg, teams with preexisting relationships are starting to have a huge advantage.

Matt and Ashley struggled early on, but the fact that they’ve known each other for years was very evident this week in their harmonious task performance. Steve and Aly tend to treat each other more like teammates than romantic partners, which obviously works very well for them. And even Mike and Rochelle, who have only been dating for seven months and collectively seem a little navigationally challenged, are well-equipped to get themselves out of the weeds. But preexisting dynamics can be baggage just as easily as they can be an advantage…we’ll just have to wait and see if this trend continues.