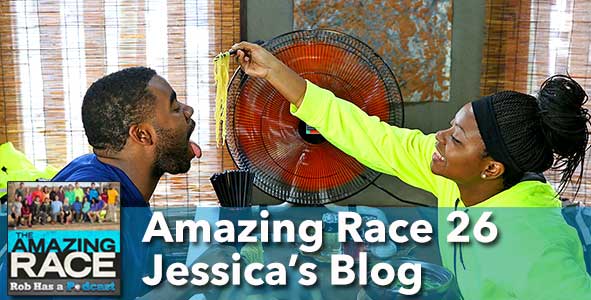 But a lot of times…there’s not just one thing that you can point to and say, “if that one thing had gone differently, X and Y would still be in the race.”

So it goes with CJ and Libby. Sure, they missed a train because they were busy taking a selfie. Sure, the train they eventually caught happened to not be a bullet train, and it happened to make an emergency stop. Sure, they tried the tougher Detour first (we didn’t see this in the episode, but it’s in the photos on the CBS website). And sure, they left the Pit Stop 45 minutes behind the next team. A hyperintelligent, fantastically athletic team might have made SOME of that time up, but your average folks wouldn’t have a prayer. And CJ and Libby, as charming and funny as they are, were definitely average folks.

So there’s no real takeaway from Episode 2 that we’ve never discussed here before, except maybe, “if the producers give you a selfie-cam and tell you to use it, don’t use it when you’re minutes away from needing to be somewhere.” I guess.

Now that it’s been partially responsible for one team’s ouster, I think it’s entirely safe to say that the selfie cam is definitely not working. I admire The Amazing Race’s perennial willingness to change things up, especially since one great idea working out is going to go a long way toward saving this show’s dwindling ratings, but all the selfie cam’s doing is slowing down the action so we can get amateurish camera angles and worse sound. Way back in the show’s salad days, they were occasionally given a product-placed phone so that they could read a clue or make a playlist (I think it was Season 7 that featured team-made travel playlists on their sponsored devices). I could totally understand the use of a digital camera if the show were getting something out of it other than redundant, worse-quality footage.

What IS kind of working out, albeit not in the way the show likely intended? The blind dates. After pretty much entirely rejecting the premise that this is an exercise intended to make them fall in love, most of the blind date teams are doing about as well as any pair of people who actually DO know each other might expect to do. It was pretty foolhardy to expect Bachelor-style shenanigans, I think, but in terms of Amazing Race performance, these teams are, by and large, crushing it.

In terms of Amazing Race characters? Maybe not so much. I do wish that we’d had some match-ups based on something other than common profession, common location, or “well, you’re gay and he’s gay.” That would also have gone a long way toward making these teams a little more distinguishable. Pair some based on some colorful interest they have in common (a middle-aged pair of Parrotheads in Hawaiian shirts, or a former pro athlete and former pro sports cheerleader, or a couple of cosplayers from the con circuit) and some based on something that makes them very different (a recent Auburn grad and a recent Alabama grad; an MMA fighter and a buttoned-up Ivy League type; a hip-hop fanatic and a country music enthusiast). Treat it like any other season of the show, with the usual demographics to cater to…just with this added layer of matchmaking complexity. We’ve already proven that the twist works in the sense that Racers who are strangers can succeed as a collective unit; now let’s find a way to make it work as far as bringing the same kind of diversity and entertainment value that your typical TAR season contains.

Let’s close out by taking a quick look at the top nine and doing some loose power rankings.

The Top Seeds (Jelani/Jenny, Tyler/Laura, Aly/Steve): Who could have guessed that three of the top four performers so far would be blind date teams? Well, actually, anybody who knows what to look for in a team that does well. They’re all young, they’re fit, they’re not douchebags to each other or to the public at large. Of course they’re going to be okay on the Race.  But more than that, they both want to be there, they weren’t caught off guard by the twist, and they’re hungry to race.

Mark and Mallory failed as a race team because Mark didn’t particularly want to race without his bestie. Mallory was originally an alternate along with another racer from her original season. If either one of them had gotten to race with the partner they’d intended to race with, they might have done fine, regardless of whether or not that person was their partner the first time they raced. In this season, we’ve got racers who came in knowing they’d be racing with a stranger. They didn’t get their original partners yanked out from under them. This was the plan going in, and presumably they all actively want it.

In any normal TAR season, Aly and Steve would likely be that one young, fit team setting the pace for everyone else. But the fact that they’ve basically gotten themselves into a race with three other teams of their usual archetype means they’re going to have to work that much harder to get to the end. This week they showed what they’re capable of, and I have a feeling their Olympian dedication will continue to shine through.

The Don’t Count them Outs (Jonathan/Harley, Jeff/Jackie, Bergen/Kurt):  It was a rough leg, comparatively speaking, for Jeff and Jackie this episode, mostly because of blind luck — they chose the tougher Detour and never had any indication that they’d have done better on the noodles. But they powered through, and they’re still here. I’d say that the only reason I’m not putting them up in the top tier is, ironically, the fact that they are the only team who seems to be kind-of-sort-of succeeding at the Race’s original goal of getting blind-daters to be attracted to each other. It’s a slow burn, and they haven’t lost focus yet, but the possibility’s there, unlike with the other four blind-date teams. (And, spoiler alert, social media indicates they’re still hanging out as friends, at least.)

Kurt and Bergen, and Jonathan and Harley, are solid performers. They haven’t gotten terribly lost, they haven’t screwed up a task, they haven’t imploded on each other. It’s too soon to tell if they’re real contenders, though, and like I said, it’s a tough field of competition.

The Dark Horses (Rochelle/Mike, Matt/Ashley, Hayley/Blair): Team Hairstyle, Team Truck Stop, and Team #RxForLove (or, as Curt Clark suggested, #OTCFriendZone) all have some pretty serious work to do if they’re going to be contenders. They’ve spent the first two legs near the back of the pack — getting lost, getting tripped up, and getting irritated at each other.

But I say “Dark Horse” and not “No Chance” for a reason. If they learn from their mistakes, keep a clear head, and have a couple of strokes of good luck, we could well be seeing one of these teams in the finals. In that respect, this is just like every other season of this crazy show that we love.