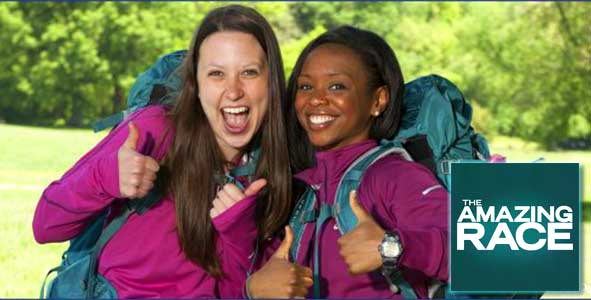 The Sweet Scientists’ enthusiasm was contagious.[/caption]

Personally, when I saw Amy and Maya cross the finish line last night, I felt totally triumphant. But as I check out the reactions of Rob Has a Planet, I’m noting that I may be in the minority. Some of you feel a little cheated by the fact that a pair of total non-powerhouses, one of whom was nursing an injury, managed to limp across the finish line before a team of professional athletes, a team who’s racked up five leg wins, and a team who made Dave and Connor’s sob story seem like whining about a minor irritant, and yeah, I do sort of get that. It’s not the most logical story. But to those of you who are throwing up your hands in frustration, calling this one of the worst seasons ever, swearing off the show, I have to at least take a stab at adjusting your perspective, because honestly, not only is this outcome not that bad, there’s actually a lot to love about Amy and Maya’s win.

Let me ask you this. What would you prefer: a team of underdogs hanging on by a thread until they kick it into overdrive in the final leg, or one team absolutely dominating until the end? Because I’m pretty sure the people who are complaining now about Amy and Maya’s allegedly dissatisfying win are some of the same ones who complained that winners like Meghan and Cheyne, Nick and Starr, Jason and Amy, Dave and Rachel, Bates and Anthony, or hey, take it all the way back to Rob and Brennan… are boring. You need dominant winners AND underdogs to keep the Race interesting and unpredictable.

Who’s the perfect winner? Fact is, there isn’t one. There’s no one team out there who’s going to please every faction. And I submit that the Sweet Scientists are far from the least satisfying winners we’ve ever had. Certainly their win is not a reason to quit the show, and they’re far from undeserving.

Sure, Amy and Maya didn’t win any legs except the final leg, but they are hardly the first winners to manage that. In fact, they’re the fourth U.S. winners to do so. And up in Canada, they’ve yet to produce Amazing Race winners who’ve won anything but the final leg. So we have to stop treating it like an anomaly. The fact is — and this came up during the very first season I covered for RHAP — the Race is not graded cumulatively. It all hinges on the final, and whether you like it or not, the Sweet Scientists aced that final.

It’s true that they hit one extraordinary streak of luck in that they are the first teams to compete in a final-four final leg. But everything in the race is informed by luck to some degree. There’s no Racer out there who’d tell you differently. Nearly everything that happened after that was attributable to human strength or error. Brooke and Robbie followed bad directions, Jim and Misti took off in the wrong direction, and Bethany couldn’t nail down her nine-digit number quickly enough. (I think particularly where Brooke and Robbie are concerned, it’s pretty clear they would not have won that final leg with or without Amy and Maya there.) Any of these teams COULD have pulled off the win if they’d done one or two things differently, but they were outraced. I’m sorry if it stings that your favorite team didn’t run the near-perfect final win they needed, but that doesn’t mean the game is flawed or the deck is stacked or the show’s not worth watching.

What really made this win palatable for me was the sheer love these ladies have for this game. They have never been less than 110% psyched to be there. They’re clearly huge fans of the show and constantly grateful for the experience. Also, they’re no slouches in the athletic department — anybody’s going to look like the “before” guy in the Charles Atlas ads next to the likes of Jim. We learned this leg that Maya is a triathlete and Amy’s an even stronger swimmer than she is. We already knew they stepped up their workouts prior to the Race.  They’re not super-ripped or scarily intense, but they held their own. If they were really as out of shape as everyone’s saying, they wouldn’t have made it this far. Maybe they’d still be treading water out at the Coast Guard station and we’d all be talking about the inevitability of the dentists’ dominant season. The point is, they held their own against tough competition. They were nerdy, they were female, AND they were fit. These aren’t all mutually-exclusive descriptors. I’m incredibly happy that we can now point to them as proof that racing ability comes in all forms. You don’t need to be the buffest or the most telegenic if you know the game and you’ve done your homework — that’s a great lesson to take away from this season.

Which isn’t to say I’m 100% happy with the way this all went down. I do think the leg could have been a little better designed, starting with the mid-leg elimination. Anybody paying close attention could pinpoint that “surprise” elimination point the second the Coast Guard task came into view, and honestly, it wasn’t very sporting for Phil to show up and boot them before they’ve done a single challenge.  A leg where the eliminated team is going out before they even get to complete a challenge is a little unfair to the fourth-placers. I don’t think the outcome would have been different if Brooke and Robbie had had to get through something skill-based before Phil put them out of their misery, but it would have at least felt a little fairer.

The best finales are always the ones with tasks that call on a variety of skills and allow for a lot of order-shuffling between the Pit Start and the final mat. Think of Season 23’s flour-bag-tossing and totem-pole puzzles and compare it to Season 24’s choreographed magic trick and skydive. Season 25’s finale was much closer to the former than the latter, but there’s still room for improvement. While the final task required a satisfying amount of brain power, the stunt Roadblock took every team the exact same amount of time, and the rescue task was physically taxing but not as Herculean as, say, the coconuts. Things boiled down to a final task that required a lot of brain power but wasn’t particularly fun to watch. There’s a balance to be struck here — a task can be both interesting to watch and difficult to master, and I hope future final legs are a better mixture of both.

On the whole, this is one of the best seasons we’ve had in years. Certainly it’s the best of the ones I’ve covered for RHAP. The cast yielded very few duds (and numerous superfans with great respect for the show), the locations were as diverse as they were gorgeous, the challenges were mostly fun to watch, and however you feel about the outcome, nobody can say they saw it coming, or that it wasn’t edge-of-your-seat exciting.

Before I ditch you guys and hit the beach until February, I want to extend big thanks to everyone who’s been reading and commenting, as well as everyone who’s been tuning in to our weekly podcasts. Extra thanks to Frank, Dave, Connor, Joe, Bill, Luke, and Phil (!!) for taking the time to sit down for interviews with us. (We’ll have many more of these for you next season.) Thanks to Scott and Shane for their hard work behind the scenes. And, as always, thanks to Rob for giving me a place to shoot my mouth off about this show. It’s my sublime pleasure to be a part of Rob Has a Planet.

Hope you all have an excellent holiday. See you for Season 26!