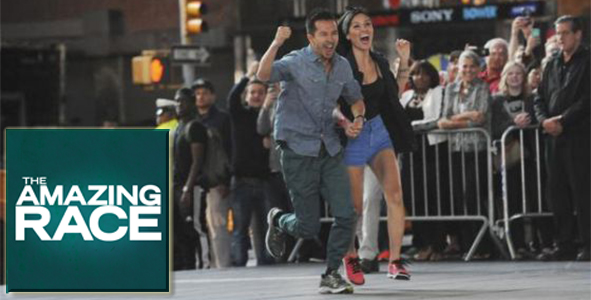 Common Amazing Race superstition says that any racer who professes to be a huge fan of the show will ultimately come into the show with no concept of what it really takes, and they’ll go out in the first few legs.  Where Survivor gives us Spencers and Cochrans and Robs, who typically can master the game they’ve studied for years and go very far, it’s a rare Amazing Racer who will be shown professing their lifelong love for the series without the Amazing Race failing to reciprocate that love in very short order.

But I don’t buy it. Here’s my controversial theory: I think there are plenty of superfans who’ve gone on this show and have done an amazing job. I would guess we’ve had many great racers, and even multiple winners, who spent years’ worth of Sunday nights cursing the football delay while they waited for Phil’s voice to herald their favorite hour of the week…maybe without even considering that they might someday be on the show. In fact, I’ll make the controversial statement that even in this era of recruits, more people come into this program having watched and loved it than come into the show having barely heard of it. We just don’t always know who’s a fan and who started watching the day CBS called them.

Put another way, fanatics though they may be, I wouldn’t guess that, for example, Season 21’s Gary and Will could trounce Season 14 finalist Luke Adams or Season 16 winner Jordan Pious in a game of Amazing Race Jeopardy. Don’t let the show fool you – being a fan is not a liability in and of itself.

So why, then, do we see so many self-proclaimed TAR groupies crash and burn so early? Well, there are many reasons teams can suck at the race. Dumb luck destroys teams at all levels of Race-readiness, of course. And I’m sure there are a number of armchair quarterbacks who think that being able to tell you who was hit with a yield in episode 12 of season 5 is a more valuable racing skill than being able to run an 8-minute mile.

But “why do superfans fail” wasn’t the question, was it? The question was: “why do we SEE it so often?”

My guess? Every team needs a story in the post-production room. The longer a team’s in the mix, the easier it is to pull a narrative out of all of the footage. But when it’s time to tell the tale of why the tenth- and eleventh-place teams are gone, it might be hard to package an easy explanation. So their angle becomes “Amazing Race superfans” and their downfall becomes hubris. Dennis and Isabelle probably weren’t eliminated this week because they underestimated the difficulty of the show so much as they hit a task that didn’t play to their strengths and let their emotions get the better of them. But that’s been true of a lot of teams.

I believe there are teams left whose love for the show rivals Dennis and Isabelle’s (and Shelley and Nici’s). I’m sure there are also a couple whose concept of TAR is, “that network reality show that’s going to send us on a free trip and give us more exposure.” But I’m not so sure we always know for sure which teams are which, and how many of each we’ve got.

So how can a superfan avoid falling into the trap of being that superfan whose early exit reads as ironic?  I don’t think there’s a formula, but like I said on the podcast, I do think before you go, you should be carrying out your daily routine in a way that reflects the qualities you’ll need on the Race. Studying’s got its place, as does loving the show, but if you don’t have the basic groundwork down, you aren’t going to make it past the first few legs. After all, you don’t know what it’s going to throw at you, and it’s impossible to prepare for every specific eventuality.

Here are a few improve-able qualities I think all good racers will need to have a handle on (and how some teams are — or are not — reflecting this).

1) Be ready to adapt to unfamiliar surroundings. It’s a travel show. If you aren’t ready to cope with long flights, people who don’t speak English, reading maps, or giving directions to a taxi driver, this is really not the show for you. Understand that the country in which you live is but one small fraction of the wider world, and come into this competition looking forward to broadening your horizons. If you get lost in your own local shopping mall, you’re going to have a bad time.

Since our destinations so far have included a popular beach vacation spot and one of the world’s largest English-speaking cities, this hasn’t come up much yet (though we know it’s going to, since that’s basically what the show IS). Dennis and Isabelle may well have figured these kinds of skills would arise well before their boating skills would be called upon.

2) Know yourself. You don’t have to be a Zen master to succeed in this game, but you do have to have a sense of what might set you off and how to put yourself right again.

Keith and Whitney have come unglued at fully half of the tasks we’ve seen so far, but they’ve been able to get a handle on things and move on. We easily could have seen them go home first if they’d been so upset about the Roadblock that they couldn’t put their heads down and sprint it out. And we easily could have seen them go home second if they’d gotten stuck on the pancakes longer than the one failed attempt. But even if they do tend to blame each other for hiccups, and they haven’t been exactly kind to one another, they’ve been handling their business so far. I’m not saying they are contenders to win, but I will give them a modicum of credit.

Brooke and Robbie also excel at this. They’re easily rattled, but they know it, and when they see it coming, they can rationally handle it.

3) Know your partner. When you fail at #2, you need to know that the person out there with you is going to be able to pick up your slack and get you back into racing mode. This is how Brenchel managed to reach the finals in two different seasons despite one racer…um… wearing her heart on her sleeve.

And this is one reason Dennis and Isabelle wound up at the bottom. When their punt started to have a mind of its own, they couldn’t adapt, they got flustered, and they couldn’t talk each other down from the ledge.

4) Work out. A lot. You are going to be running, so you should be able to do that, preferably with a backpack. (Dennis and Isabelle mentioned they’d done a lot of this. They’re not the first team to say so.) And you’re probably going to be lifting things, hauling things, and maneuvering around things, so if you’re not doing weight training, get on that.

It’s not an accident that we see so many young, lithe couples in the finals. Not to say you can’t get far if you’re not in pro-athlete shape, but boy does it help. That we have professional wrestlers, professional surfers, and professional cyclists in our cast means that if you can’t handle even the most basic physical challenges, there’s not going to be a lot of room to escape elimination. Better to do all you can to eliminate that as a major weakness.

5) Be detail-oriented. Misti and Jim might be physical powerhouses who’ve strategized to no end, but something as small and dumb as standing on the Oxford side of the boat when you should be standing on the Cambridge side could mean the difference between staying and going in later legs. And Kym and Alli tipped their hats quite a few times before they noticed something was written on the inside of them.

Amy and Maya, on the other hand, have noted that their predisposition for precision has already helped them out when they made quick work of last week’s treasure hunt. And I’m sure it’s not the last time we’re going to see the scientists attack something scientifically. (Also, if at least one of these two is not a superfan, I’m going to be utterly shocked.)

Essentially, if you are fit and smart and have a great partner, the Curse of the Superfan should not be the thing that’s holding you back from making an audition tape. The Race podium is not strictly the domain of people who watched three seasons in a hotel room after they heard from Casting.

Though they had a rough leg, Shelley and Nici could absolutely be the ones to prove once and for all that there’s no such thing as the Curse of the Superfan. (Or, at the very least, I think they’ll last long enough to cast some doubt on it.) In any event, they are doing one thing right: as Shelley noted at the beginning of the leg, the best way to win this race is to tackle it incrementally and, above all things, avoid being last. After all, as Winston Churchill himself once said, “it is a mistake to look too far ahead. Only one link in the chain of destiny can be handled at a time.”