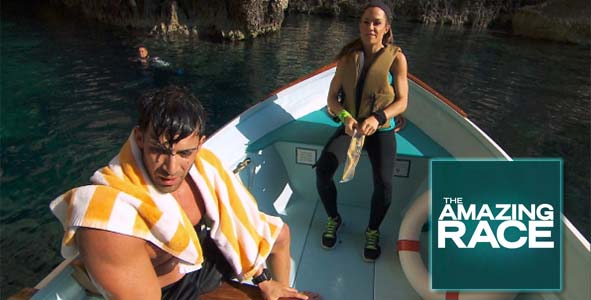 It’s always exciting when the Amazing Race visits a country it’s never been to before. Last season’s totally uninspired route wasn’t just a whole lot of two legs in one place, it was a whole lot of countries we’ve already been to three and four and ten times. But really, I totally understand how we can get to India ten times and never make it to Malta until now, and this week’s episode, as fun as it was, really highlights why.

The real reason the show goes to, say, China so often is that China is frickin’ HUGE. There’s a lot of variety, both cultural and geographic — a Beijing leg isn’t going to look like a Xi’an leg isn’t going to look like a Guangzhou leg. It took the show 17 seasons before it went to Lichtenstein because the most remarkable challenge they could design around Lichtenstein involved its smallness.

The simple fact of the matter is this: not all countries are created equal, as far as the Amazing Race is concerned. There are a bunch we’re never going to see on this show (at least, not on the American version) for reasons of foreign policy (Cuba, Iran), politics within the country (North Korea, Turkmenistan), safety (Honduras, Eritrea), or logistics (Bhutan, Kiribati). And after 24 seasons and 82 countries, we’re really past the point where you can look at the list and think, “really? they’ve never gone there?”.

The obvious countries have been visited; most of them multiple times, and a tiny country like Malta, which the racers had to reach via a two-hour ferry that arrives twice a day, poses a particular challenge to course designers. There’s no going straight to Switzerland after just one task, like they did in Lichtenstein in Season 18. If we’re going to Malta, a country one-tenth the size of Rhode Island whose entire population is one-half that of the city they just left, the Race designers might find it tough to scrape up enough interesting material to fill an entire leg.

So, unfortunately, the trade-off to checking a new country off of the list is that we get a leg with a couple of design flaws.

It seems pretty clear that the flag game (known locally as “gostra”), while one of Malta’s more interesting and unique traditions, was probably going to be impossible for most of the teams; and the armor-polishing, while equally rife with opportunities to make immature jokes, was going to be boring as hell. Think about it – if you could read a description beforehand, which one are you going to try: “Polish a suit of armor” or “Run up a greasy pole to grab a flag”? Everyone would have done the armor, they’d all have spent a peaceful, quiet afternoon scrubbing dirty things with a cloth, and we’d have been deprived of shot after shot of racers falling into the water.

With a blind Detour, you have no idea what to expect on the other side, so once you pick one, you’d better make absolutely certain that you can’t do it before venturing into the unknown. What’s more, the flags were clearly easier to find. That gave teams incentive to at least take a run at it, which gave the editors some interesting footage and enabled the show to highlight one of Malta’s more unique sports, before all of them inevitably completed the task that required no skill whatsoever.

The unfortunate side effect of this is that Tim and Te Jay were almost certainly doomed from the moment they arbitrarily chose one five-letter word over the other. Unless they had switched to armor immediately after seeing the pole and the flags, in which case they’d have passed Brooke and Robbie when they switched from armor, there was no going back from that one random choice. To speculate further would be fan fiction, but really, their elimination was largely out of their control.

A better solution? Make the gostra a Fast Forward. It’s hard enough that trying it would be a real gamble, but interesting enough that at least one team would be likely to try it. And it would probably be a stronger team like Adam and Bethany (who genuinely regretted that they didn’t get to try it after they used their Express Pass) or Kym and Alli. (This idea comes from my husband, who is reading over my shoulder and demands credit.) For an alternative skill-based Detour option, try snooker or bocce, both popular sports in Malta. (Attention Bertram van Munster: I’m happy to send you my resume. Holla at your girl.)

Fortunately, Malta’s beautiful scenery and friendly people ensured that even though the race course suffered a bit, the destination remained a strong character in this cast. But now let’s talk about its human characters, all of whom are complex and entertaining — an unfortunate rarity when it comes to recent seasons. I like them all, and I’d be happy to see any of them get the million.

1. Adam and Bethany – My pre-season winner pick is looking pretty good right about now, and I’m not changing my mind. They’re great in challenges, strategically smart, unflappable, and endlessly supportive of one another. They’ve scarcely had a single weak moment on this entire race. And while they’re a little bit boring (like most young couple types tend to be), boring teams have historically done very well in this Race. And boring on this season is very relative — they’re not actually all that boring in any objective sense. They might well have been the most interesting team on most other seasons. A victory from these two would make all of America feel warm and fuzzy inside, which would probably be true no matter what kind of edit they got, but the editing sure as hell doesn’t hurt them, either.

2. Kym and Alli – The cyclists are an incredibly strong team whose only snags so far have been relatively minor, and of course they’re funny as hell to boot. What’s not in their favor is the fact that they’re so disliked by the other teams. Much like the Afghanimals in Season 23, Kym and Alli love to amuse each other and the viewers, but the other teams seem to be steering clear of them for reasons that haven’t really been outlined beyond some vague handwaving about being “threats.” I don’t know if there’s something we’re not seeing, but it’s usually not a good sign when a team is outwardly likable to the viewers but not so much liked by their fellow racers. Kym and Alli may just be cruising to that fan-favorite fourth place. Or they may be pulling a Beekman and circumventing the mean-girl clique of fellow racers to win it all.

3. Jim and Misti – It might seem counterintuitive to put the team with the most wins in the middle of the power rankings, but the fact is, they’re just a little bit too win-obsessed. Jim’s counting his wins on four fingers and looking out for that thumb. He’s said so twice. In fact, Jim is rarely NOT talking about winning. Teams who say the w-word that many times almost never end up actually taking home the big money. Off-camera, there’s clearly much more to these two — after this week, who can claim they’re not funny? — but what we see is a pair of nonstop go-getters with one thing on their minds, and while I admire their focus, I don’t see the payoff being that obvious this season.

4. Amy and Maya – There’s always that one team that surprises you by the mere fact that they’re still there, eight legs into the race. Who, honestly, looked at these two petite, nerdy girls on day one and predicted they’d be in the top 50th percentile of racers? But while they’re surprisingly tenacious, Amy and Maya can’t really run with the big dogs. They’ve got the lowest average placement of any team left. Still, their sheer love for the show resonates with those of us who also love it, and everyone loves an underdog, especially one with by far the most enthusiasm in a very enthusiastic bunch.

5. Brooke and Robbie – I’m not going to say that the wrestlers have zero chance of winning the game, but I think they’re close to it. As funny as they are, and as good as they are at anything involving brute strength and/or memory, Brooke and Robbie have been depicted as having the worst attitude of anybody left. They are Amy and Maya’s opposite number — where Maya could bounce off the walls at the prospect of doing pretty much anything, every task seems like the end of the world to Brooke. When she’s in a good mood, she’s as funny as her boyfriend, but we’ve just seen too much complaining out of her for a wrestler win to feel satisfying. The writing’s on the wall here — just as surely as if the show was scripted. Which I’m not saying is something they have experience with, but I’m also not saying it’s NOT something they have experience with.