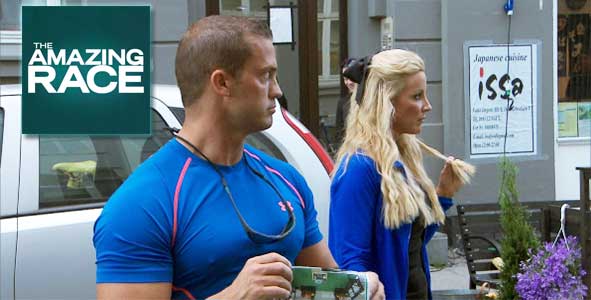 Depending on who you ask, so far this season, Rob and I have either been way too kind or way too mean to Jim and Misti. Either we’re drastically overexaggerating their intensity (and Jim’s scary, scary stare) or we are overlooking their faults because we enjoy what they’re bringing to the table.

Honestly? This team is one of the strongest in the Race, and you’d be an idiot not to think so. But there’s no way they’re going to be the most dominant in history, either. Sorry, Jim. This week proved it: the dentists are mere mortals just like everyone else on this Race.

The dentists’ fatal error this week was deviating from their formula. Reading the clue carefully, choosing the tasks that didn’t rely on the exacting standards of a task judge, and keeping their eye on the prize kept them in the top three for the first three legs.

Jim said it himself last episode: when given the choice between something that’s being judged and something that involves physical labor, choose the physical labor. Maybe last week’s sassy pony spooked him a little, but it was odd to see them succeed so brilliantly and then immediately deviate sharply from what they know works for them. They claim to have spent hours preparing for the show. That should have included figuring out how to react to the worst-case scenario, but it seems as though whenever they hit a bump in the road, they believe that fucking with the formula is the best way to get back on track.

For Jim and Misti this week, each thing that went wrong drove them to go further and further afield, and it certainly didn’t appear that they felt they could experiment since they had a Save in their hands. They just started throwing ideas at the wall to see what stuck, which isn’t the way they wanted to run this race. If they want to work their way back to the front, they need to get back to all those careful plans they worked out before they started the Race.

(Incidentally, the fact that they didn’t have to give up their Save tonight? That is perhaps the worst instance of game design I’ve encountered on this show since the days when teams got their money confiscated on non-elimination legs. I can’t see a universe in which this plays out in a satisfactory manner. There’s absolutely no reason Misti and Jim should have been allowed to keep that thing.)

Here is my advice to those of you who are pondering applying for The Amazing Race, since apparently we here at RHAP have become a reference for you despite the fact that neither Rob nor I have ever appeared on the show. If you’re interested in going on the show but you haven’t picked a teammate yet, consider carefully the person you bring with you. 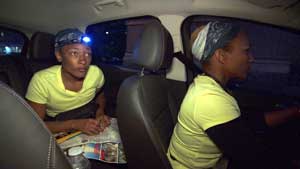 It’s better to succeed than to prove a point.[/caption]

Bethany could have been cast on this show with anyone, I would guess, but she picked Adam because he understands her moods and knows almost instinctively how to compensate for her weaknesses (and vice versa). Amy and Maya are coworkers who share lab space and as students, they have seen each other through years that have a very specific rhythm of stressful periods. Whitney and Keith have been through the pressure-cooker of a reality show in the past, so they know how to relate to one another with a camera in their faces. It’s a similar situation with Brooke and Robbie, who share a physically demanding line of work that puts them in the limelight. And Kym and Alli have competed with each other and against each other.

All of these folks know their partners in different ways, but they can all boast understandings of one another that are decidedly different from anybody else’s understanding of the person they’d bring into this show.

But parents and children…well, they all have a similar set of issues that they bring with them into collaborative ventures. Think hard before you ask your parent or child to get into this mess with you.

Parent/child teams tend to not go far on this program because, simply put, your parents don’t always know how to handle you at your worst. Parents tend to look past their children’s faults when those faults might reflect back on them, and they tend to be unable to step outside of the dynamic they had with their children years before those children were adults. Neither is conducive to running a good leg of the Amazing Race. (It’s almost become a cliche to have the parent/child team coming into the race with Junior complaining that Mom/Dad doesn’t see them as an adult.) And parents and children tend to be more alike than they think they are, which is also no good for those who need to run a race as a team.

The parent/child teams who’ve historically done well — Dave and Connor, Margie and Luke, Ron and Christina, Toni and Dallas — have brought different energies to the table, they’ve known how to balance each other out, and they’ve been able to separate their teammate from the person who changed their diapers 20 years ago.

This week, Shelley and Nici had opportunities to do this and just …didn’t. The instant things started to go wrong for them, Shelley refused to see her daughter as someone with equal capacity to make things right. Nici, for her part, couldn’t take herself out of the mindset where crying and yelling and screaming will eventually be resolved by her parent. It’s a very deep, primal thing. Think about it — over the course of your life, who’s the person who’s borne witness to your very worst tantrums? Of course some small part of you knows you can still throw a tantrum in front of them. It’s nothing they haven’t seen before.

Put another way, you can’t expect to do well on this show if your teammate is willing to prioritize proving a point over succeeding. And nobody’s better at that than a parent in a bad mood.

Either Shelley or Nici might have done better this leg if they’d had a different partner. Nici needs to have someone who’ll be able to rationally talk her down from a frustrating moment, and someone in front of whom she can’t totally break down. Shelley needs to have someone who’s good at making her believe she’s got her hands on the steering wheel at all times, even if she actually isn’t. They need to step up and be the kind of partner each other needs, even if it doesn’t exactly fit with the relationship they have off the Race. These ladies have a lot of strengths to bring to the Race, but they’re going to have to disconnect from real life if they’re going to go further. Like Phil said, it’s time to be grownups. That goes for both of you.

But enough about who had a tough week. I need to give some props to Kym and Alli, who did everything right and absolutely deserved their first-place finish. They exercised perfect airport strategy (a lost art on TAR these days!), read all the instructions carefully, thought outside the box to make sure their cake didn’t crumble, and when a piece was missing (in their case, their cake receipt), they took their time to backtrack and stayed calm. And best of all, they had an absolute blast the entire time. Their joy was almost enough to make me overlook the fact that this leg had absolutely no suspense tacked onto the front end of the finish order.

Tim and Te Jay also had a great week this week, despite a little bad flight luck. Thanks to Te Jay’s prior experience as a waiter, he knocked out the Roadblock in record time. Their Detour performance relied on that same attention to detail, and it appeared to take them much less time than it took, say, the surfers.  And of course any team who not only knows world capitals off the tops of their heads, but jumps all over each other to be the first one to deliver the answer, is going to score points with me. Book smarts didn’t do much for them last week, but they got their chance to shine this week, and I think more such opportunities are in their future.