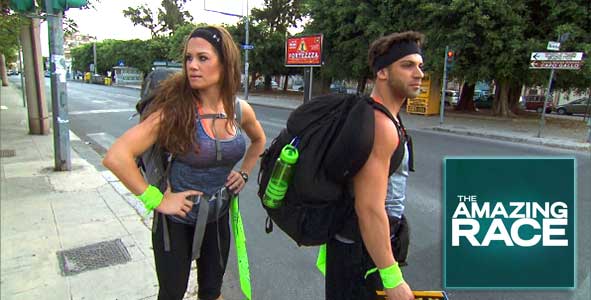 I’m pretty sure Season 25 is the best Amazing Race season I’ve ever covered for Rob Has a Website. And despite the ratings taking a big Friday Night Death Slot hit, most of the fans I’ve interacted with seem to agree with me that it’s been a great ride so far.

It’s easy to explain its awesomeness with, “it’s this route,” or “it’s this cast,” or “it’s not Season 24.” All of those things are definitely true. We’ve gone to some really cool places that the Race hasn’t been to a million times yet, the cast is refreshingly free of stunt-cast media personalities who are just in it for the exposure (well, it is now, anyway), and nobody’s crying or yelling or complaining about injustices perpetrated on the elderly.

But that’s not even the real reason this season has been so fantastic thus far. Plain and simple: everyone who’s left in the Race is actually having fun. How could that possibly not be fun to watch?

If you were suspecting that up at the front of the pack, we’d start to get an actual full-blown rivalry between the two teams who’ve collectively won all but one leg, give yourself a medal. This week, both the cyclists and the dentists were going full throttle toward first place, and honestly, that kind of showdown makes things very exciting. People actually care about winning legs again. And even more important, more than one team is committed to that goal. Out on the go-kart course this week, it was clear that racers who had actual competition were compelled to go faster. The applications of that theory don’t stop on Mount Pellegrino. It’s true of the Race as a whole as well.

“Don’t be last” is sound racing strategy if you’re trying to secure the safest path to the million dollars, and it’s served plenty of teams well over the years, but you can’t deny that it’s more fun for the viewers when there are a couple of teams who want every single victory the Race will let them rack up, regardless of the actual prize value. The best rivalries make you both better. Look at Larry Bird and Magic Johnson, or Picasso and Matisse, or Apple and Microsoft.

Even better than that, the rivalry is almost completely in good fun. Nobody’s getting into a confessional ready to talk about how much they can’t stand another team.  Had Kym and Alli really intended to mean-spiritedly needle the dentists in the airport parking lot, they’d have left a message a) where the dentists would have been able to see it (remember Brenchel in the gondola last season?), and b) that was a little more damning than “no fun.” This, like everything the cyclists do, was not the least bit antagonistic in any serious way. And if we weren’t sure that nobody hated anybody before we saw these two teams actually teaming up on their way into Palermo, we had to be once they hit the road together.

There are other teams they love more, both teams acknowledged, but when there was cheese and wine and bread and lively music, these four were more than happy to join hands and party down with the companions at hand. And even Jim started dancing with abandon once everyone else started getting down. I’ve heard over and over from Racers that these are the kinds of moments that make this experience so memorable. Sure, completing challenges and strategizing and nailing that one really lucky flight feel good, but nothing’s as great as those times when you get to kick back and take it all in with your new friends who are sharing in your incredible, unique adventure.

In other words, if you’re offended on Misti and Jim’s behalf because Kym and Alli said they were no fun: lighten up!

As for Jim and Misti themselves, sure they want to win. And it’s pretty clear that they’re ready and willing to go balls to the wall every single leg in service of snagging that million-dollar prize at the end. While this doesn’t leave quite as much room for them to, say, go around writing in the dirt on their opponents’ cars or hit up a bar before they head to the next destination, anybody who’s painting them as total robots is doing them a pretty big disservice.

Now, Misti is pretty much never not smiling, and Jim is never not staring a hole in the camera, so I can understand that it’s hard to tell when they’re just enjoying the moment, but I don’t think they’re lying when they say this is the most fun they’ve ever had as a couple. You can tell they’re not so obsessed with the win that they’re getting less out of the race than anybody else. They’re engaging with the other teams (even the ones who aren’t their favorites). And you can’t accuse them of not smiling, because how could you miss that?

So yeah, they don’t wave their arms around shouting “yaaaaaaay” like Tim and Te Jay are frequently seen doing, but that doesn’t mean Jim and Misti aren’t also having the time of their lives.

In other words, if you think the dentists are totally humorless: lighten up!

But enough about the dentists and the cyclists. There are four other teams out there, and great rivalry notwithstanding, do not count the rest of these guys out.

Adam and Bethany have not only won a leg themselves, their win was pretty decisive, and they’ve been running a very solid race. This week, their main mistake was choosing a Detour based on the fact that its scarcity made it seem more desirable. (Which was, actually, the same mistake Tim and Te Jay made, they just happened to be slightly less speedy with a paintbrush.) In fairness to the surfers, the only two times they’ve really had a rough go of things on this race has been this week and Copenhagen, when they got stuck on a detail that screwed up everyone who touched it (and, actually, screwed alleged unbeatable powerhouses Jim and Misti up even harder). They’re a little bit under the radar just because they aren’t quite as zany as Kym and Alli or Robbie and Brooke and they aren’t quite as intense as Jim and Misti, but they’re right there in the mix.

Also pretty solid and under the radar: Amy and Maya. They haven’t yet had the kind of leg where you’re absolutely shocked by their rock-star-ness, but you can’t roll your eyes wondering why THIS sucky team is still there and other teams aren’t. They haven’t yet come close to winning a leg, but we also haven’t seen them lose their cool, pretty much ever. When they arrived at the go-karts, Maya hopped into her coveralls, exchanged a hi-five with her partner, and dug in — and when she failed, “oh, man,” was the worst we heard from her. That’s just emblematic of the scientists’ race so far. You know who else coasted along at the back of the pack doing an okay-but-not-great-or-terrible job but hanging onto a great attitude? And you know what other team of coworkers professed a love of dairy fat? The Beekman Boys. Competent, good-natured mediocrity landed those guys a fat mortgage payment, their own Time Warner commercial, and all the baby goat snuggles they want.

Even Tim and Te Jay are contenders, despite the fact that they’ll be contending with a Speed Bump next week. Their chief weakness is that they have a tendency to overthink things and miss an obvious solution, but this wasn’t the reason they fell to the back of the pack this week. This week, like I mentioned, it was just a time-consuming Detour option that looked great on its surface but turned out not to be the smarter choice. I think they’d have knocked the Posers task out of the park if they’d ignored the siren call of the fresco cherub. That one was right up their alley.

And I think anybody who reads anything I’ve written, or hears anything I’ve podcasted, about this season so far knows that I have a special soft spot for Brooke and Robbie. And no, I don’t love their attitudes all the time, particularly Brooke, who tends to proclaim tasks impossible before she’s even seen what they are. But even the wrestlers, who are probably the most complaint-prone (and maybe the most mistake-prone) team left in the Race, are maintaining a good-humored outlook most of the time. Any team who can bleed 40 minutes on hunting for a taxi and then claw their way back past two teams has to have SOME kind of redeemable Racing talent. (And you know you want to make Robbie’s opera singing YOUR ringtone, too.)

Seriously, any of these four teams could upset the top two. It’s not a done deal yet. This season has been surprising me with its excellence from day one, and I’m certain it’s still got more than a few awesome tricks up its sleeve.

In other words, if you are afraid the season has nothing more to offer in the name of competition than two teams way out in front and a bunch of ballast: lighten up!

In the words of this blog’s spiritual mascot, Rachel Reilly: the Amazing Race is supposed to be fun and good. Guess what, fans? This season it IS fun and good. If you keep looking for things, people, and decisions to dislike, you’re going to miss out on what might be shaping up to be a top-five TAR experience.