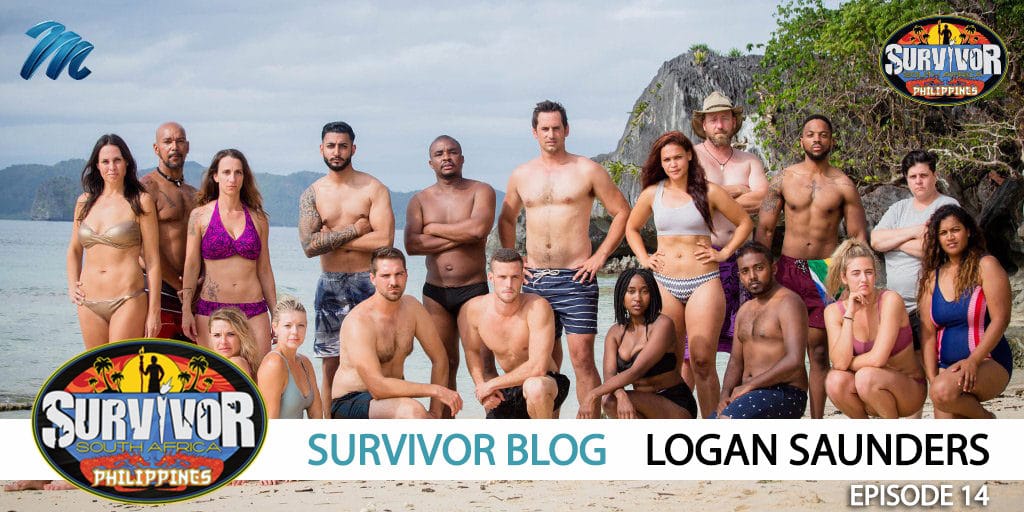 Previously on Survivor SA: After Werner approached Tom and Katinka to form a F3, Katinka shared the plan with PK. PK exposed the plan with the rest of the tribe prompting Annalize to start thinking about her extra vote. But just before Tribal Council, Annalize had second thoughts.

Jeanne got worked up at Tribal Council over the Final Three.

Jeanne is really angry insulted and “assaulted” at Tribal Council. She starts going on a F-bomb filled rant about how the jury is accusing her of having no agency and that Kat and Werner are the puppet masters.

JEANNE: I hate going to Tribal Council right now! I hate it!

WERNER: If I put Jeanne on the jury, it might balance things out.

There’s a joke to make, but I am not going to make.

Annalize quietly tells Katinka that she picked up an extra vote. Neither of them want Werner in the Final Four.

Katinka cuddles up with Tom in the hammocks. She wants Tom with her in the F3 because the jury won’t vote for him to win. They have a conversation about eliminating Jeanne and Werner prior to Final Three.

TOM: Katinka approached me about taking out Werner. Bold move. . .very bold move. It would make us all a bit more popular with the jury. . .but I don’t know if I want to.

Tom talks to Werner at the water well. He pledges his allegiance to Werner and that it would be a game-changing move for the jury if Werner were to go home. Werner thanks Tom for providing him with this information.

Does Tom think he can beat Werner at Final Three? Really? Does he? Or does he just want Werner to win just like Jeanne does? Hmmmm.

They read Tree Mail. A loved ones visit is strongly hinted at.

The loved ones come out. Everyone cries like little punks.  Ha! Ha! Just kidding. But seriously, Werner cries profusely.

Jeanne has a friend named Zanigy. I know I butchered that spelling.

None of the relationships are announced. Annalize’s (husband?) Paul comes out. I assume Jeanne and Zanigy are partners. Werner and his wife whose name I have already forgotten are married too. I thought pastors can’t get married, but whatever.

JEANNE: I want to meet the woman who said yes to Tom.

TOM: My heart dropped out of the bottom of my underpants.

Wow. I have never heard somebody say “I shat my heart out” on Survivor before. Maybe Lex during Survivor: Africa during the Final Immunity Challenge.

For today’s challenge, they will be tethered to a rope on an obstacle course. First person to finish wins reward. This is identical to the loved ones reward challenge from Survivor: Millennials vs. Gen X.

BBQ and a B20Pro Selfie Phone are what they are playing for today. Tom of all people is stoked for selfies.

Jeanne is not comfortable with doing somersaults over the hitching posts. Annalize struggles with the chain. We are in the water. Tom pulls a Silas and takes a knee. Werner’s lead keeps growing. Tom is still at the beginning.

Werner has a massive lead as he is finished with Somersault Fest. He goes to the second stage where he had to go over and under a much lower post on the sand. He finishes the second stage too! Werner keeps digging in the sand to crawl through the third stage, but he can’t get his legs through.

Werner and Janay get the BBQ and the B52Pro. Obviously, he can pick somebody to join him. He opts to pick Katinka.

NICO: Because I/Producers are feeling generous, you can choose one more.

The presumed Final Three are going on reward. Well, reward being a BBQ at camp. Jeanne is not bothered by not being chosen but Annalize is tearing up pretty good.

ANNALIZE: I knew I wasn’t going to be chosen because I am not in his little alliance.

Werner wins a B52Pro for himself at home!

My parents hate the family visit episodes on Survivor. They would hate this scene right now. Selfies and food.  There are cooks right there. Ah, I love the NPCs.

JEANNE: This is brutal. I can smell the food. I can hear them laughing.

Annalize reminds Jeanne of the conversation PK was having with them one day earlier.

JEANNE: Dammit, everything makes sense. Do I want to sit with Werner at the end? I don’t think so.

Jeanne is waking up in this game. But is it too late as she notes who the real Final Three will be?

Katinka pulls a Cedric & Shawn from TAR 30 pose in the form of Dabbing for one of the pictures. Werner says his wife is telling him to be vigilant for the rest of the game.

Tom talks about his current tough position with his wife. She tells him to do what he has to do to earn a million Rand.

TOM: Sometimes all a man needs is permission from his wife.

Loved ones are gone. Nico takes back Werner’s talisman.

For today’s challenge, they will use a pole to maneuver a bowl through a structure which sets on a spring. If it tips, they must start over. First person to stack ten bowls wins individual immunity.

Yes, this challenge originally debuted in Survivor: One World and is typically used as Final Immunity Challenges. It also appeared in Millennials vs. Gen X.

We begin. Jeanne is first to land a bowl. Werner is last to navigate his first bowl. He quickly jumps up to third place with a second bowl. Tom takes the lead with three seconds later. Then a fourth.

Tom has six. Werner has six. . . Werner on top with eight.

Jeanne’s tower of seven bowls tips. Down to zero.

Werner has nine. Tom has nine. Both place their tenth just seconds apart but Tom edges him out! Tom cries on Werner’s shoulder. Wow. Tom sounds like he is about to pass out.

WERNER: Tom is a competitor and fought for his life today.

TOM: I thought today was my day. I am still in this.

Tom really thinks he is in danger or just wants immunity to disguise his internal conflict of what to do tonight?

Tom is immune. Werner has an idol. Not good if you’re Jeanne.

JEANNE: Tom was going to go at five, but he won immunity so we have to vote Annalize.

Thankfully Jeanne hasn’t been equally open with Annalize being number four in her alliance.

All five openly discuss Werner’s idol and Werner says he will play it. Tom asks Werner publicly for them to walk away for a chat.

WERNER: Jeanne is not too stressed because she assumes Annalize will go home. . .the votes will hit Jeanne like a fireball.

Will Werner eliminate his biggest goat besides Tom, though? Apparently so. Werner wants Jeanne to influence the jury.

My least favorite phrase-Bitter Jury. Because they don’t exist.

Katinka, Annalize, and Werner are in the water talking about eliminating Jeanne.

Tom and Jeanne are at camp. Jeanne tells Tom about her paranoia.

Heh. Tom loves to play along.

Annalize has to correct Katinka on how to spell Jeanne’s name correctly. Katinka was going to spell it with a ‘G’.

TOM: Getting rid of Annalize will be a good thing because Katinka is so far up her bum. . .I don’t trust her. I think something is going on there.

Tom approaches Werner. He thinks Katinka and Annalize are too close.

TOM: That relationship there is too strong.

WERNER: What are you saying?

TOM: You know what I am implying.

Tom informs Werner that Katinka’s plan is to eliminate him at Final Four.

WERNER: So my deal is off then.

Werner is flabbergasted. His heart is broken but he will use his idol to trigger fireworks which will clear a path for himself to Final Three.

TOM: I can actually taste that stuff they put on Sour Worms in the air.

Why does Tom always talk about animals that are associated with fishing and the water? Crocodiles, fish, lobster, crabs, and now worms.

Everyone pretends Tom was going home tonight. Tom is on pretending too. Katinka’s mom told her anything goes.

TOM: The reason why my wife is with me is that I am a man of my word.

Tom lies about what his wife said to him in the episode. The whole jury mutters under their breath.

Annalize promises to be a new woman. Jeanne thinks Tom’s ugly cry at the immunity challenge meant that Werner picking him for reward did not indicate any Final Three plans.

Werner talks about his idol and it being the last night to play it.

Annalize plays her extra vote after everyone has voted. Vusi and Chane high five.

JEANNE: You didn’t need it, though. You don’t.

Werner goes up to hand Nico his idol but hesitates.

WERNER: Today information came to me. . .I heard my closest ally started to plot against me. It broke my heart for a moment but then realized it was a game. . .I am going to play this idol so it may save the game for me. So I know you’re a fan Jeanney so I’m going to give you the opportunity to play the idol for myself.

Katinka is gone. Annalie is laughing. Chane silently mutters some words. Jeanne refuses Annalize’s pat on the back. Katinka laughs and bows as everyone applauds her efforts.

NICO: Finally we have fireworks. No more advantages. No more idols.

Are we heading to a Final Two? I hope so.

Next Time on Survivor SA: A large maze. No hint of it being the final episode. Therefore a Final Two?

Katinka wished she could get to the ed.

Final Four. People have been saying Werner is an obvious winner since week one. If Werner makes it to the end, he probably does well speaking in front of a jury and the season gets derailed by an extremely predictable outcome.

If Annalize wins the next immunity challenge, Jeanne probably goes home as Tom and Werner are the tightest alliance in the game. Any other scenario and she is dead.

The Final Three of Tom, Werner, and Jeanne is being set up for us. A great scenario would be if they go down to a Final Two and somehow Werner goes home in third place to make for the bizarre Tom vs. Jeanne showdown. Would the jury commit mass suicide and leave Nico with the responsibility of choosing a winner?

I would like to think Jeanne and Annalize could temporarily team up at four to go against Werner and Tom, but Jeanne is ridiculously loyal to Werner and Tom. It will be a shame if Annalize’s dark horse buildup leads to a conclusion of her going home in a very quiet manner. And yes, the Pointless Extra Vote was pointless once more. It was nearly not pointless thanks to the 3-2-1 split, but Werner rendered it pointless. Hilarious.

I for one want to see Katinka and Toni hanging out at Ponderosa together for the remainder of the game.

Let’s cross our fingers and hope for one of the following two things:

I just can’t see a scenario where Werner doesn’t win back over the current jury members who are vowing to never write his name down to win the whole game.

P.S. Poor Katinka. She was so young and innocent. Just another juror who gets outplayed by Tom of all people (and a last second idol assist by Werner).