Previously on Survivor: Riverlands, the Brains tribe pulled off a miracle at the immunity challenge, and the Beauty tribe sent Loras home for being a fashion-forward butterfly. Meanwhile, on the Brawn tribe, Khal Drogo told Brienne that The Hound wants her gone.

ROS: You guys, I can’t believe you voted Loras out. He was the most attractive non-whore on our tribe. 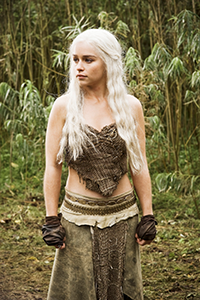 DAENERYS: We got tree-mail. It’s a blindfold challenge. We need to practice.

(Daenerys coughs “dragons.” They practice for the next five hours straight.)

TYRION: Daenerys keeps claiming her luxury item is dragon eggs. I’ll believe it when I see it, even though I’m pretty sure this show did away with luxury items after that one guy brought a Magic 8 Ball like twenty seasons ago.

Somewhere in a field

PROBST: Time for a reward challenge. No, seriously! One tribe member will direct a blindfolded pair through this field littered with obstacles placed at exactly the height of the average man’s testicles to retrieve five items and a flag and then hoist them up to the caller.

YARA: There’s no puzzle? This is the most ridiculous situation I’ve ever put myself in, and I just wish I hadn’t.

JON SNOW: I would be way more upset about this if we weren’t winning. Or if I hadn’t taken a vow of celibacy. My junk is purely ornamental.

(Tyrion runs underneath the obstacles, retrieving items with ease. The Brains take the lead over Brawn.)

DAENERYS: Melisandre! Put the flag on the platform, do absolutely no magic, and we’ll win!

(Melisandre puts the flag on the platform and recites a spell. The flag turns into a handful of Koosh balls that roll off the platform.)

MELISANDRE: This blindfold is dark and full of cotton!

(Brawn comes back and wins. Tyrion throws his blindfold on the ground in disgust. Jon Snow picks it up and swaddles his sore groin.)

(The Beauty tribe admires their reward: three hens and a rooster.)

MARGAERY: Does, like, the rooster have to get it on with one of the hens to make eggs?

ROS: Yes. Definitely. With all of the hens. And some of their friends.

MARGAERY: Which came first? The chicken or the egg?

JON SNOW: The egg because dinosaurs.

(Jaime carries one of the hens up into a nearby tree, then promptly shoves it to the ground.)

BRIENNE: We need to throw the immunity challenge and get rid of The Hound because I’ve promised to protect all of you and sworn my loyalty to all of you, but especially Khal Drogo who would never lie to me.

EVERYBODY: Okay, cool, sure.

Somewhere in the Trident River

(The tribes stand on wooden platforms.)

PROBST: You’re probably wondering why I’ve called this meeting. It’s time for your immunity challenge. Each tribe will have to dive down and release five buoys and then knock a knight off a horse with a jousting pole to win. Survivors ready? Go.

(In an attempt to throw the challenge, Brienne and Ygritte play Marco Polo instead of retrieving buoys.)

(Melisandre floats on the surface of the river uselessly.)

TYRION: Tell me again why we put the witch in another water challenge?

(The Hound knocks knights off with ease. Brains lose.)

YGRITTE: Tell me again why we put the professional jouster on the jousting leg of the challenge we were trying to lose? You know nothing, Brawn tribe!

Later in the woods by Brains beach

OLENNA: Who are we voting out: Melisandre or Tyrion?

DAENERYS: I’ve made pros and cons lists for each because I have dragons. Melisandre, Pros: smells nice. Melisandre, Cons: Threw away all of our food, turned our first aid kit into leeches, can’t swim, built a vagina shelter.

OLENNA: I don’t need to hear the other list.

That Night at Tribal Council

PROBST: Melisandre, how do you think you’re doing?

MELISANDRE: Jeff, I usually rise to the top in high-pressure situations.

PROBST: And the fourth person voted out of Survivor: Riverlands is… Melisandre.

MELISANDRE: Death by fire is the purest death.

PROBST: Melisandre, the tribe has spoken.

MELISANDRE: Look to your sins, Jeff. The night is dark and full of terrors…

MELISANDRE: …but the fire burns them all away.

OLENNA: Where was that when we were freezing our tunics off the first night??

Somewhere between the Trident River and Ponderosa

MELISANDRE: In retrospect, demanding that the executive producer look to his sins was probably a mistake.