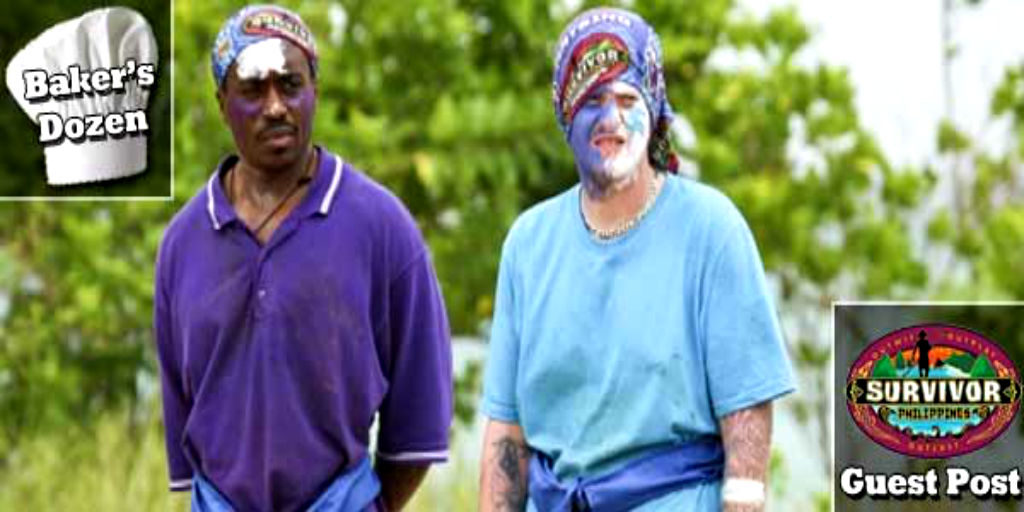 I have to say, it feels good to sit down and write about Survivor again. For those of you who have been reading my Big Brother columns, I thank you for joining me over here in the Burnett/Probst sandbox (so much better than Grodnerville). For any new readers, here’s how this works: Every week, I’ll be writing about thirteen points of interest from the latest episode. I tend to dwell on strategy, but pretty much anything is fair game. And now, without any further ado, here’s this week’s Baker’s Dozen:

1) Zane was full of butchered metaphors and incomprehensible comparisons, but despite the unmitigated awesomeness of his checkers/chess mash-up and onion speech at tribal council, the gold medal goes to his explanation of his Frankenstein tattoo. That had to be the first Mary Shelley reference in reality television history, doesn’t it? And if someone had told you that one of this season’s eighteen players was going to explain his strategy by way of a literary comparison, how many guesses would you have made before you even thought of Zane? (Answer: 16… you’d pick him before Angie.) The best part is that his reference was completely accurate. For all of Zane’s misguided strategy, I have a feeling that Zane is far brighter than your usual first boot, and I’m sad to see him go.

2) Speaking of Zane’s strategy, Zane can spin it all he wants, but part of him wanted to quit. It may have been a momentary weakness, but the truth is, no one even considers telling his tribe that they should vote him out unless part of him wants to exit the game. He did a good job of covering his tracks – other than the double whammy of admitting that he had multiple alliances and that Russell might have found an idol – but in his heart of hearts, Zane knows that the game got the better of him. There’s no shame in that, but there are two lessons to be gleaned for all future Survivor players: one, weakness is fine but revealing it isn’t, and two, don’t quit smoking the same day that the game begins.

3) Going back to Zane’s tattoos for a moment, I love that Denise instantly understood that the ink had stories to tell. This is why Survivor needs more castaway psychologists; Denise knows that tattoos often contain emotional significance and symbolic meaning, and, more importantly, she saw this as a way to connect with Zane. In about 30 seconds, Denise confirmed everything I had suspected from watching her pre-season interviews. Her ability to read people, to get them to open up and share, will help her get very, very deep in this game.

4) Denise also teamed up with Malcolm within the first three days, which made me breathe a sigh of relief: at least I won’t be 100% wrong with my predictions this season. (One random observation: Denise looks a lot like actor J.K. Simmons, who played J. Jonah Jameson in the Sam Raimi Spiderman movies, and currently appears in the Farmers Insurance commercials. It’s eerie, and I can’t stop seeing it. Sigh.)

5) Thank you, CBS, for giving us a full intro! (I’m sure the One World castaways are annoyed that they weren’t extended the same courtesy, and rightfully so.) Hopefully, this wasn’t a one-shot “because it was a 90-minute premiere” deal; the images are beautiful (Survivor in HD is visually stunning, and, no, I’m not referring only to Angie, Abi, and RC), the music is great, and the whole sequence allows viewers to start putting names with faces. There is simply no downside to a full intro… so why am I worried that it won’t be back this Wednesday?

6) Quick question about the intro: Did the Survivor producers telegraph which tribe is going to dominate the game? If you watch carefully, one of the final shots is a silhouette of what looks to be a rooster set against a night sky; not coincidentally, the word for rooster in Tagalog (one of the languages spoken in the Philippines) is Tandang. How unlikely is it that the inclusion of this image was an accident? My son Bentley, a highly observant 6 year-old, insisted it was the immunity idol; he might be right, but even if he is, the fact that it looks like a rooster, and there are no monkeys (Matsing) or water buffalo (Kalabaw) anywhere in the intro, makes me suspicious. Is this another Vecepia/SurVivor Easter egg?

7) You gotta love Penner. He went into the game saying that he was going to avoid getting into verbal battles with Probst, but he didn’t even make it to the first commercial break. During the scramble for supplies, Probst yells at the castaways, “Get off this boat!” Penner, unable to let the comment go, retorts, “Or what happens, Jeff?” This is precisely what makes Penner so awesome: he speaks his mind, he isn’t going to be bullied, and really, what WOULD happen if they didn’t get off the boat when Probst said they had to? Ah, but then we found out the answer to this question: People on your tribe start snapping ligaments.

8) Survivor commandment #37 (returnee season only): If your plan is to go after the veteran players, don’t make your pitch to the entire tribe all at once – build consensus one castaway at a time. The guy who did it wrong: Jeff “I didn’t deserve my MVP” Kent, who told all of Kalabaw that they should vote out Penner the first time they go to tribal council. The fact that he had a receptive audience doesn’t make his decision a wise one; I’m virtually certain that this conversation is going to come back to bite Jeff “I wasn’t even the best player on my team in 2000” in the ass, because someone is going to end up being more loyal to Penner than she is to him. (I say “she” because I’m guessing that Dawson is going to be the one who tells Penner all about Jeff “Bonds was the MVP that year” Kent’s plan.)

9) The guy who did it right: Malcolm. He talked with Denise about targeting Russell and then, slowly but surely, accumulated all of the other Matsing votes. What made this all the more impressive was the fact that Russell knew he was being targeted, but seemingly had no ill will towards his tribe (he also didn’t appear to have any idea who was calling the shots; point, Malcolm). Another indication that Malcolm and Denise are in complete control of Matsing: Zane was voted out 5-1, which came as a surprise to both Russell and Zane; clearly, someone had unified the vote and shifted the target from Russell to Zane. Something tells me it wasn’t the Angie-Roxy brain trust, which means Malcolm and Denise are already a power to be reckoned with.

10) The editors do love foreshadowing, don’t they? When RC tells us that she’s got a good feeling about Abi, but that you just never know in Survivor – doesn’t that guarantee that one of them is going to turn on the other? Personally, I think it’s going to be Abi backstabbing RC, but it could just as easily be the other way around. All I know for certain, thanks to the inclusion of this RC confessional, is that these two will not be sitting next to one another at the Final Tribal Council.

11) Fortunes rising: Dawson. Is it just me, or does Dawson command the camera? It doesn’t love her, exactly; it’s more that she shines somehow. Anyway, something tells me that she’s going to be one of our key narrators this season, which means she’s going to be around awhile (Editing 101: you don’t develop a character who is going to be killed off in the first act). I also can’t shake the feeling that she’s going to team up with Penner; while the rest of the tribe turns its collective back on Penner, Dawson is going to seize the opportunity to forge an alliance with him… a decision for which she will be handsomely rewarded when Penner finally finds the hidden immunity idol.

12) Fortunes falling: Pete.  Of COURSE, he’s the one who makes the inevitable Mike Skupin fire joke. Douche. My distaste for Pete aside, he’s stumbled into an alliance which will give him a stronger sense of security than it should; when that alliance falls apart, though (a process which will begin next week, methinks – more on that in a moment), he’s going to have no idea what to do about it. In his pre-season interviews, Pete kept saying that he’s an engineer by education and a model by occupation. Here’s an addendum: he’s book smart but game dumb.

13) Prediction time: We’ve been teased that Lisa has been ostracized from her tribe and is suffering from the elements (a brutal combo), but that would suggest a storyline, not an elimination. The narrative I think we’ll see emerging in Tandang is Skupin reaching out to Lisa (there is NO WAY he can sit there and watch her struggle) and the four-person alliance (Skoop/Abi/RC/Pete) fracturing as a result. Meanwhile, over at Kalabaw, Penner is hunting for the idol; I’m guessing he finds it, uses it to consolidate power, and the target shifts to someone else. Jeff “I made over $86 million in my playing career, so I REALLY don’t need the money” Kent, maybe? Katie or Dana? In the end, I don’t think it matters; Matsing is such a hot mess that I can see them ending up back at tribal council – the only question is who goes. Russell will likely earn himself a stay of execution by way of hard work and diplomacy, and I don’t see Malcolm or Denise on the chopping block. That leaves Angie and Roxy – flip a coin, and that’s who’s leaving on Wednesday. (I just did it, and the coin-flipping fates say Roxy’s days are done.)

That’s it for this edition of The Baker’s Dozen – sorry it took so long to get this one out. The plan is to have this column up on RHAP every Friday… so I’ll see you then. If you have some thoughts, I’d love to hear ‘em – tweet me @GetOnSurvivor and/or write a comment below.