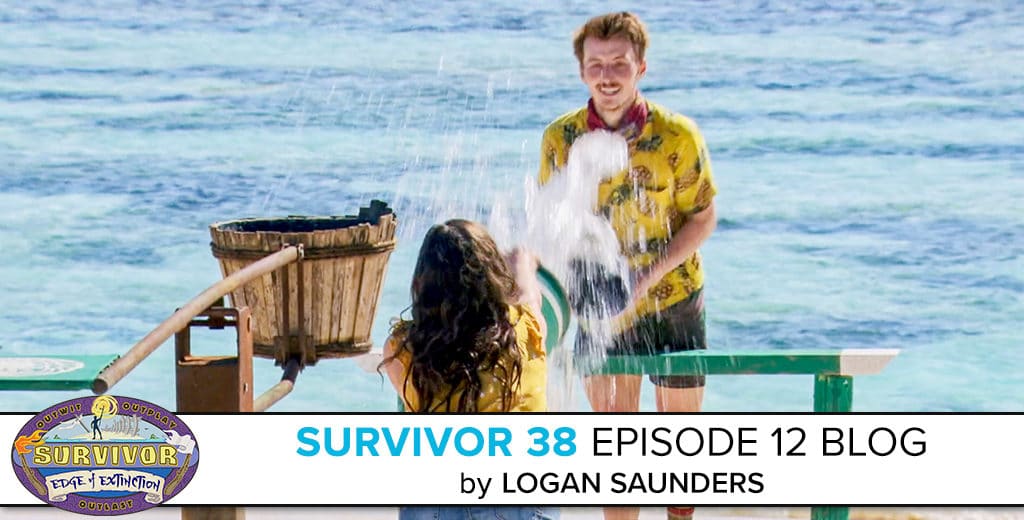 Logan Saunders recaps the twelfth episode of Survivor: Edge of Extinction ahead of episode 13 in his blog, entitled “Red Ron.”

Previously on–Psyche! The segment is dropped.

The first of ten million of Devens’ confessionals this episode as he laments the exit of Dan, and Ron turning his back on him once more.

Ron pulls Devens aside and pretends the Advantage Menu is currently active as an idol. Well, that explains why an item which never came into play pre-merge was relevant enough to be shown in the first place.

This is the moment in every season since the first year where my parents fast forward through several segments and get really bored.

Yep, it’s the Loved Ones visit. The reward challenge is the same as the loved ones visit Cook Islands and Heroes vs. Villains.

Nothing new is offered during the visits. You could probably write the script yourself. It’s funny when you watch this episode at 30 second intervals. You realize how formulaic this is.

Winner gets a picnic back at camp.

This time the loved ones are retrieving water and tossing it while the survivors have to catch it.

Victoria is extremely fatigued. Julie is simultaneously laughing and crying.

Devens pauses to chat with his wife in a Leann Vanuatu like manner when they realize the chances of winning are nearly 0.00 percent.

Why is Victoria’s dad Duke from The Amazing Race 10?

Ron picks Julie and her dad.

Now he gets to pick an additional pair. Ron grants Gavin and his wife a honeymoon. Lauren makes the worst Lemonface ever.

Victoria is figuring out the strategies behind Ron’s picks.

Gavin’s winner’s edit skyrockets in this scene. I am rethinking my Lauren and Victoria picks.

Ron reveals to us in a confessional that Gavin was picked due to pure strategy. The three of them agree to eliminate Devens if he doesn’t win immunity.

The loved ones exit.

There you go. I just summarized the first half of the season.

Devens goes into the jungle. Everyone else is searching Devens’ bag as Devens has returned and catches them snooping.

DEVENS: I feel like I would be awkward if I was caught looking through someone’s bag.

DEVENS: I guess I am the awkward one then.

Devens keeps looking and looking in the jungle until he finds a clue. He contemplates whether to just go for it out in the open in front of everyone or wait and wait for camp to be somewhat empty and claim the tree above camp to get the idol.

This just in! Devens’ edit is OTTPP5 this episode! Devens’ crotch gets destroyed while climbing the tree. It’s like a sloth moving up and down. I wish the branch snapped and he fell on top of everybody to ruin the stealth mission.

Devens has yet another idol.

It is the immunity challenge from Survivor: Fiji where you–oh forget it. It’s the Coach Challenge. Does it need any explanation? Feet on footholds decreasing in width. Last person standing wins immunity.

Ron and Probst fight over whether this challenge is a question of willpower or pain.

Devens falls first. Cusses. He calls out Aurora as being a target after he is eliminating. Aurora is extremely blunt that Devens will be voted out tonight.

Ron voluntarily hops down. Him and Devens quietly agree on the bench to vote out Aurora.

Victoria steps down too. Julie quits. She is in a shit ton of pain. Ron picks her up like a bride on a honeymoon.

Aurora lowers herself down with pure control. She was clearly capable of winning this challenge.

Lauren is having an orgasm. Gavin is chill. Lauren’s orgasms eventually come to an end as she falls.

Gavin earns individual immunity! Both of them sit down. Gavin is safe tonight. Will he pointlessly vote out another close ally like he did with Eric now he has power or will he vote out somebody who will target him soon?

Everyone sits around the fire. Devens asks aloud if anybody wants to align. Pure silence.

Later on Ron and Julie join him in the woods. Vote Aurora. Mmmmkay. Devens is the decoy.

The paranoia back at camp is about whether Devens has an idol.

Finally, women are shown. Lauren and Victoria, the two who keep evading the vote despite being in minority positions throughout the season, think they can oust Ron tonight. Lauren believes Ron will never be on her side.

Lauren goes off to Gavin and emphasizes she had a looooooooong chat with Gavin today.

After this brief non-Devens scene, we have our quadrillionth Devens strategy scene. Advantage Menu? Idol?

Ron votes Devens. Devens votes Aurora. Lauren votes Ron. How has Lauren avoided detection for such a long time? Remember when she was in tie votes? Or isn’t Victoria still at the bottom?

It’s time to read the votes, but Devens presents an Advantage Menu.

DEVENS: Ron and Julie, you are villains. I was already going home. Did you just want to make me look stupid? So my kids think I am an idiot? . . .exceeeept you have proven to be disloyal and untrustworthy, and Julie has proven time and time again to love lying to people’s faces.

I should note Reem’s poncho.

DEVENS: I am playing this hidden immunity idol. You guys are gems.

Wentworth and Julia are being waaaaay too vocal on the jury.

Devens didn’t even vote Ron, but it’s like has taken the credit. Ron, the tribe has spoken.

Ron takes the torch. This season is left in but not the intro. OK then.

Next Time on Survivor: In the penultimate episode, when all your cards are on the table you’ll need to find hope or a joker could run wild.

Ron thinks he took his eyes off the prize.

When strategy becomes too robotic and no stable storylines, it can feel like we keep falling back into the Player A votes Player B and Player B votes Player C and Player D plays an idol/advantage rotation that we have seen in recent seasons.

No Edge of Extinction which makes me question if any of the ten on EoE will come close to winning when they don’t get any airtime with just two episodes to go. Will Devens get voted out next week then re-enter the game?

The best EoE twist would be if there was no challenge in the finale and Probst duped them for the past twenty days. That would be great television.

Lauren, Aurora, and Victoria are playing a brilliant game but yet receive highly minimized credit for Ron’s elimination. It was all them.

I think if Devens finds a combination of idols, wins immunity challenges, heads to EoE and wins another EoE Resurrection Pass, the audience will revolt.

They need to discontinue family visits until it can bring something new to the table. “Tell me about X and how X helps you emotionally” ten times on repeat for ten minute segments for ten seasons straight wins the award for easiest access to a Fast Forward button ever.

Mr. Pittman at TDT pointed out our final episode will have an EoE scene, the EoE Resurrection challenge, three immunity challenges, four Tribal Councils, and a 13-person jury. Goodbye reunion?

It’s safe to assume Devens will go home next round, yes? I can’t see it twisting any other way.