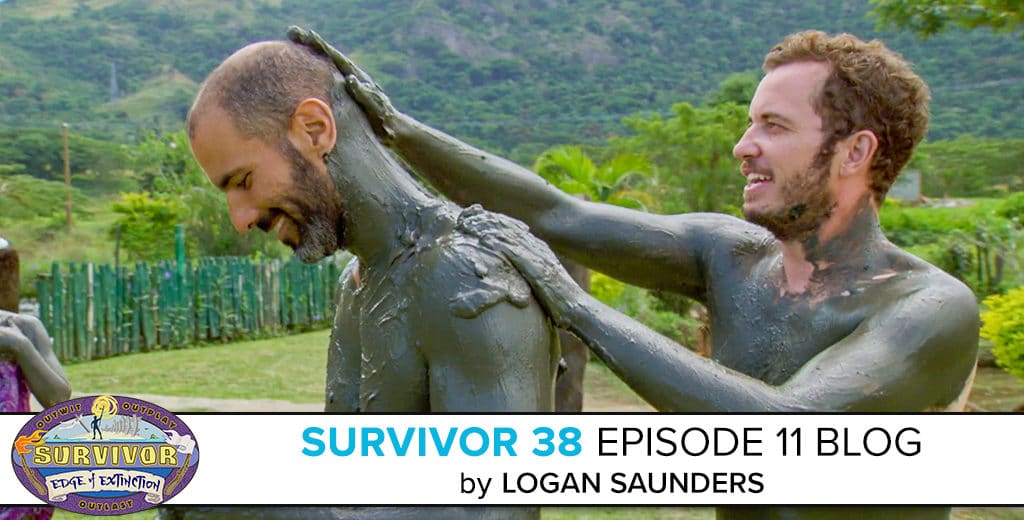 Logan Saunders recaps the eleventh episode of Survivor: Edge of Extinction ahead of episode 12 in his blog, entitled “Dog Day Afternoon.”

Previously on Survivor: Aurora was slated to go, but Dan wanted to eliminate Wentworth. He left his closest ally Lauren in the dark. Wentworth was the final returnee to go and made the endgame much more interesting as she exited with an idol in her pocket.

Sixteen remain; who will not go home tonight?

Lauren, whose job is “ONE IMMUNITY IDOL,” is bummed to lose her closest ally. Instead of going for Dan, she wants to eliminate Rick Devens.

Gavin tells Dan he wishes he could have been in on it. Bullshit Gavin, but Dan responds to him in the worst way possible.

Gavin’s paranoia gets to him. Ron is happy with the Gavin and Dan split as he is eager to eliminate Dan. Dan is a loose canon and is completely defenseless.

Surprisingly, Julie is chill with Ron not letting her in on the blindside. She says it is a good thing they are not always a voting bloc. Ron is honest about Aurora’s extra vote and insists he is still with her. See Dan, that’s how you mend fences after a blindside.

Rick expects others to go after him or Dan because no one else has built a resume yet. I mean, there was the whole blindside Aubry with an idol too, eliminating Eric, flipping on Julia, etc. but whatever.

Rick, Dan, and Ron decide to go after Aurora because it is the easy vote. Ron is not really with it. He can go wherever he wants. Will everyone take Aurora out as an easy vote or time for another blindside?

It’s the Survivor: Pearl Islands first immunity challenge but in teams. Run on a platform, swim underneath, collect a ring. Only two of them have to do it for each team. At the end they’ll fling the rings onto poles. First team to do so wins.

Dan slips on the platform and swims the wrong way, but yet keeps up with Ron all the way through the first heat.

Aurora slaughters Lauren for the second group of rings. She has RC-esque swimming abilities.

Devens lands the rings quickly. Reward is theirs! They head to a mud bath and spa.

Joe and Wentworth cry, talk through emotions, and hold bottles together like two White teens at a slumber party. Aubry hangs out with her fellow returnees.

Wentworth asks for pity but Reem calls her out on it, dude. You ruined my experience from day one, man. Screw you, dude.

After a while Reem pulls Wentworth out from burning her face and risking skin cancer. 180 switch after Reem got it out of her system.

Are you an easy vote, Gavin?

Gavin predicts Dan will crumble and he’ll still survive, but the target is on Devens right now.

Ron returns the extra vote to Aurora. Damn, he has somebody in his pocket.

They talk about rice. Aurora is called “The Rice Nazi.” Aurora refers to Ron as being “snappy.” She literally dates Ron or something.

AURORA: I am used to being around drama queens because I am one.

Where did this edit come from?! We’ve rarely seen her. It’s like the Susie Smith edit from Gabon. She is supposed to be really annoying but rarely seen any footage.

Everyone is lathered in mud. Devens and Dan lather each other’s backs.

DEVENS: Julie and Lauren are just going where the wind blows. They aren’t playing the game.

Julie triggered the biggest shakeup and Lauren is playing really hard. Devens does not have his finger on the pulse before.

Lauren and Julie are in the water. They align and target Dan or Devens. Devens first and Dan as a shield and/or second. Classic editing.

LAUREN: I have to convince people to take Rick out.

I don’t think that will be hard.

Race over an obstacle carrying a buoy. Push the second buoy through an obstacle. Use the third buoy to crawl under a net. Complete a star puzzle. First person to do so wins immunity.

Finally, an immunity challenge where they can move.

The first obstacle has them leaping from A-Frame to A-frame. They can’t touch the ground. That’s new.

Devens and Aurora are the first two to the puzzle. Everyone else joins them within a minute. Man, Aurora has muscle.

Within minutes, Aurora has declared her hatred for puzzles. Endurance and swimming challenges are more her thing.

Devens is momentarily stuck but fixes it and LA CHEESERIE! O’ DOYLE RULES! DEVENS BOOMAIEH! TRY THE VEAL! MURTZ HURTS ON THE INSIDE!

Devens has individual immunity once again as Gavin is determined to oust Dan tonight.

Victoria is pissed that Devens snagged the talisman today. Will Victoria ever be targeted?

Dan and Devens go for water. Meanwhile, everyone else agrees to eliminate Dan.

RON: Dan said if he oes home, then the biggest threats will go home. The next biggest threat is me which puts me in the hot seat.

Dan is aware he is the biggest threat right now. Ron agrees to eliminate Aurora with him. Julie doesn’t tell Dan what he wants to hear at first. She eventually agrees.

DAN: If people were smart, they would get rid of me tonight. I am baking on stupidity.

Has stupid ever been a way to reference everyone else in the game, Dan? Deep down I think he knows he is screwed tonight. He has no one going to bat for him. Kama has connections with each other, and Lauren has a couple of close bonds that she is keeping tight.

AURORA: We are all threats in this game.

But who is more of a threat right now and who could be tougher to get out down the road?

Dan says he and Ron were the ones to orchestrate Ron’s blindside. . .yet three others agreed to vote her out?

Wentworth talks too damn much during TC.

Devens keeps raising his eyebrows at the jury. An overload of jury-player interaction.

We get a facial expression from Julia.

There is an extensive discussion of threat perception.

Aurora thinks people will be surprised by tonight’s vote. She is not good at concealing blindsides.

Lauren once again clings to her idol.

Wentworth is ecstatic. Well, everyone is except Devens. He needs production to love him as much as Ben did.

He doesn’t take the torch–nah, just kidding. He does.

On EoE, Reem warns Dan he will be Reemed first thing in the morning. Wonderful.