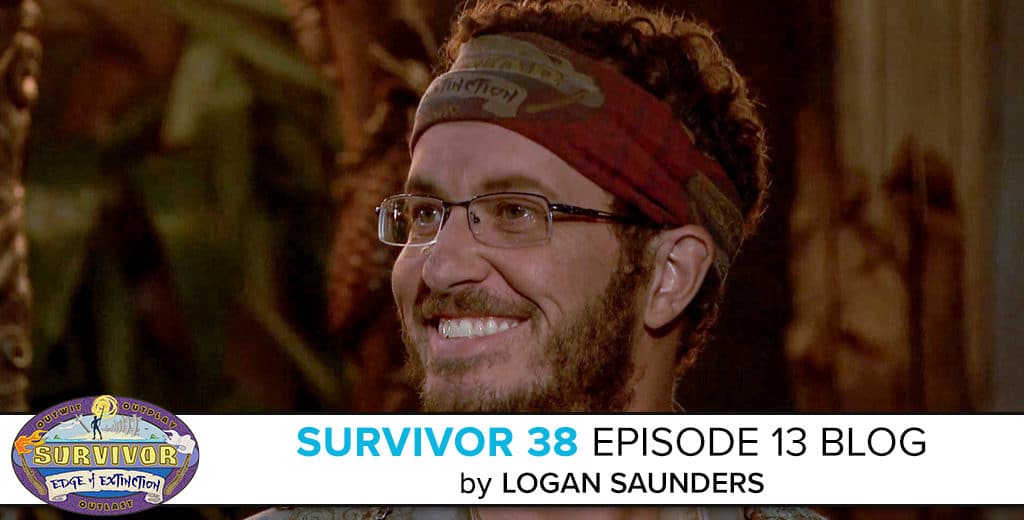 Logan Saunders recaps the thirteenth episode of Survivor: Edge of Extinction ahead of the finale in his blog, entitled “Ben Devens.”

Previously on Survivor: Rick saved himself, but Lauren, Victoria, Aurora, and Gavin had a backup plan and voted out Ron.

Rick claims the idol was from Edge of Extinction. He wants it as a cover-up so no one looks for another idol on Vata Beach.

Aurora feels she has a solid alliance for the first time all game. It’s a Final Four alliance. They are all sick of idols and advantages. So are we. I have heard of so many friends and family who have stopped watching Survivor the past couple of years because of the idols and advantages.

Rick has been up all night and all morning. No one is really tailing him. Lauren knows Rick is lying about finding the idol on Vata Beach. Lauren found the idol on Manu beach about thirty days ago but so many people have been blindsided with idols that no one knows one they are being hidden at camp.

Rick keeps looking and looking. He finds one of the smallest idols.

RICK: I am working harder than everybody else.

Except socially and being manipulative with alliances.

Sigh. If we have another case of somebody idol’ing their way to the end. . .

Throw a ball up onto a track. Catch the ball before it falls to the ground at the other end of the
ledge. Then go through a couple of obstacles and land the ball onto a ledge. Land two balls and
win reward.

Reward? A helicopter tour followed by a picnic.

No teams this week. It’s individual.

Aurora is first to catch both balls. Gavin tripping and stumbling as a ball falls on his head Katie Collins style is hilarious.

Everyone except Julie and Lauren has two balls as they go through the belly crawl. Lauren can’t get the ball into the track while Julie can’t use her feet.

Gavin lands the second ball. It’s over just like that.

Lil Bow Wow would be so sad.

Gavin has to pick somebody. Be funny if there was a reward if no one had to be picked like in
Marquesas.

Gavin picks Victoria because she hasn’t been on a reward.

So Gavin gets to pick another person. . .and he chooses Lauren who has been on plenty of rewards in contrast to Aurora. Julie is genuinely surprised Aurora wasn’t picked. Rick immediately pounces. Aurora is hurt.

Gavin says he has only been on a plane twice. Probably both of those planes were from US to Fiji. They see Aurora moping on the beach from the helicopter.

Now they eat and drink booze. It is unanimous Rick is gone next.

GAVIN: What if Devens wins?

GAVIN: Talk to Aurora to see where her head is at.

Yeah. Does Aurora want to vote Julie or herself if Rick wins immunity? Geez.

Lauren points out she has been close to Julie since the spa.

Wow. Production hates Lauren, Victoria, and Gavin for airtime. That was the shortest reward scene ever.

Victoria strategizes immediately with Aurora to oust Devens and Julie.

Aurora feels she is paralyzed and aligning with Devens and Julie can’t be an option. Gavin could kick sand into her eyes and she would still have to vote with him.

All ten, yes, TEN people on Edge of Extinction get to read the letters they wrote to themselves prior to the start of the game.

Rick intends to mess with everyone. Gavin follows Rick. Gavin turns his back to Rick for one
second to stare at a tree. Rick starts sprinting into the jungle. Hiding behind trees to scare
Aurora. He just keeps running around. This game of hide-and-seek goes on for a while.

Race to slide letter tiles into a target then use two handles to transport the tiles through a series
of obstacles. Then use the tiles to solve a SIX word phrase. NOT LIVING ON THE EDGE TONIGHT.
That’s it. First person to solve the phrase earns immunity.

Word puzzles and basketball? Do you hate ice cream too and cupcakes?

Lauren is first to start transporting the tiles. She tried carrying waaaay too many.

Aurora has strong arms so she can get through the first phase. Gavin didn’t transport many but drops it anyway. Everyone is able to deliver a stack of roughly the same size.

Rick, Aurora, and Lauren are working on the words. Eventually everyone except Gavin is getting
to work on it. Gavin left behind two tiles in his final stack.

Rick quickly puts together the phrase. He wins immunity.

He has immunity. He has an idol. He just needs another idol or another immunity win and he
can automatically make fire at Final Four. This could make Ben look like child’s play. A lot of fans
will be pissed if he wins. I think the fans would prefer the second EoE returnee winning the
game over Rick at this point.

Rick takes Julie aside. Everyone else assumes Rick won’t give Julie an idol if he has one. Julie thinks the alliance may go against Aurora of their own mind. Julie wants to pitch herself as a better goat to take to day 39.

JULIE: She is better at immunity and making fire and deciding who goes to Final Three. Lauren agrees that Julie is a better day 39 goat than Aurora. It will be all on Lauren to convince everyone to oust Aurora against Gavin and Victoria’s best interests.

Lauren tells him she is fine voting Aurora without Victoria’s allegiance. Gavin is uncomfortable without having Victoria in on it.

The four-person alliance is clear-cut. Then we talk about Rick for five minutes. Rick thinks EoE
returnee will come back to align with himself and Julie to make it 3 vs. 3 so why not play the idol
for Julie tonight.

I should note it wasn’t Rick who got Aurora voted out–it was Lauren. I don’t think Julie is as close to Rick as he thinks she is. Lauren scored a lot of day 39 points tonight.

Next Time: Five are left and one will return from EoE.

So we will have four challenges, four Tribal Councils, a firemaking challenge, checking in with people in the audience, the brief season recap, and four brief strategy sessions to get through before a winner is declared.

In other words, goodbye reunion show and goodbye any sort of amusing camp life or scenes of context.

Rick isn’t winning. He is getting way too much airtime over the past three weeks. I can’t see him
winning because of that. His edit is too over-the-top.

Julie isn’t winning either. She is being setup as a day 39 goat.

EoE returnee probably isn’t winning. Depending on who it is, they could be dragged to the end or be good enough at challenges to beat Rick a couple of times. This will be the first episode ever where two RI/Edge of Extinction players are in a finale and at least one will have an idol. Unlike Survivor NZ where Michael and Nate were picked off in 5th and 4th, the EoE players can do some damage before their exit.

Lauren has everyone in her pocket except Rick, but has an idol of her own. Yeah, Wentworth told everyone about Lauren’s idol, but that information can’t really do any damage at this point.

She is in an excellent position to win.

Victoria’s game has been just as impressive as Lauren’s. I think Lauren is the only person she can’t beat.

Gavin. I don’t know what to make of Gavin. I can’t see him being very persuasive at a FTC. Maybe he ends up being a runner-up or worse?

I feel like Lauren or Victoria will be crowned the winner on Wednesday, and I am leaning towards Lauren. She has the respect, power, and courage through since the beginning of the game. . .other than the time she was sick pre-merge. But will people hold that against her? I
doubt it.