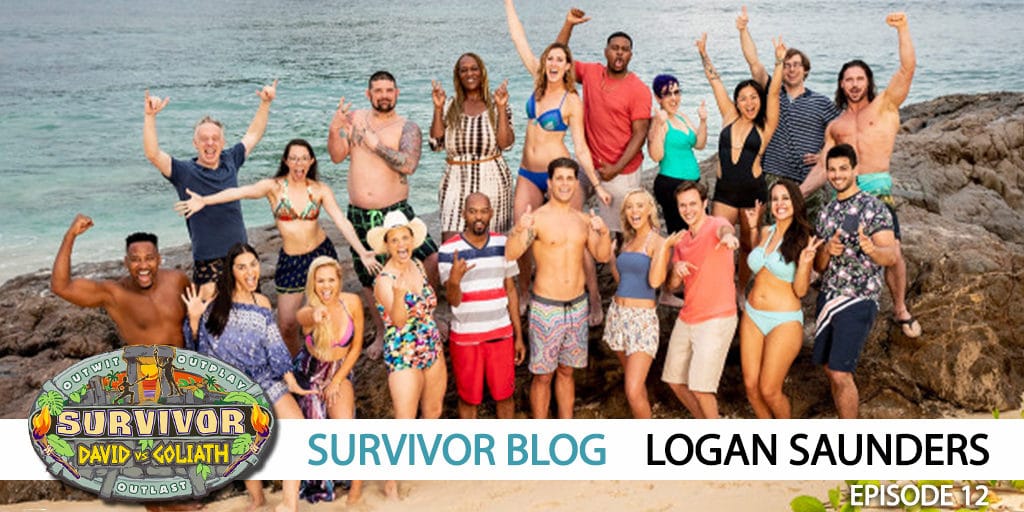 Logan Saunders recaps episode 12 of Survivor: David vs. Goliath ahead of episode 13.

Episode 12 Recap: “Wiping Away the Tears”

At Tribal Council, Christian and Gabby voted out a David, thus shocking Davie, Angelina, and Nick.

Eight are left; who will be voted out in an episode filled with family members?

NICK: I don’t get it. Those two are so smart they’re dumb.

Yes, overthinking tends to be a problem in the later stages of Survivor.

Christian insists that EVERYONE wants Alison out. Nick temporarily plays along with this while declaring Mason-Dixon to be dead. The Mason-Dixon line. . .has been crossed.

We cut to the chase. Davie can’t initially find his mom Hazel. Davie doesn’t hug with his arms for some reason. Hazel struggles walking on sand.

Alison’s mom Willa comes out. This is quickly becoming the “Fountains of Wayne” Loved Ones edition. Alison clearly didn’t get her height from her mother’s side of the family.

Kara’s brother Eric/Erik emerges from the jungle. We have the same shirt.

PROBST: The little boy came out!

I never want to hear that sentence again. Nick’s dad donated milk to have blood for five kids. . .erm, I mean donated blood to have milk for five kids.

Gabby’s mom Corena comes out. They play with each other’s hair.

PROBST: Did you feel the young woman go and the little girl come out?

Angelina’s mom Anna comes out. There’s a lot of mamas on the island. Angelina brings up the rice sacrifice inf ront of the whole tribe.

Mike’s boyfriend Josh comes out. WHERE THE HELL IS MEL WHITE?! WHERE IS HE?! DAMMIT! I wanted to see CBS finish the job and kill off their first character on-screen! YOU BLEW IT!

Christian’s girlfriend Emily is on the island. They can’t stop laughing.

PROBST: Give him a good hug, Emily. Make it a good one. Make it like the last one he’ll ever get. . .and the last hug I’ll ever see! My wifi is down and I need to see -any- type of connection.

For today’s challenge, they’ll race in pairs. Go through a series of obstacles. They must retrieve keys for balls in a pile of sand and then use the balls to land on a narrow perch high above them. The first pair to do so wins reward.

Those are our four pairs. Everybody is in a dead heat at the first obstacle as they crawl through it. Then they dig for keys in the sand. Probst comments on Angelina being the slowest out of all eight.

Mike and Davie are first with keys but Angelina and Nick are right behind. Christian and Gabby have their keys.

Eventually all four pairs have their two balls. Survivor has been obsessed with this challenge since Millennials vs. Gen X.

Angelina and Nick win the challenge out of nowhere! Angelina’s mom is jumping and SCREAMING.

Angelina and Nick get to pick one more person and their loved one. They choose Davie. All three players left out of the vote are going on reward. . .oh wait, there’s a fourth person.

Angelina picks someone who stood by her side–Mike White.

Nick’s dad is asking him about the dad.

Mike reveals he is in the middle of both alliances to Josh. He anticipates a Final 4 alliance.

Angelina and Davie openly make a F4 deal. Angelina extends this out to everyone.

Davie is secretly against this because the other three were all on the Jabeni tribe together.

GABBY: I need to play for me.

No more comfort for Gabby.

Gabby tells Alison that they need to blindside Christian so she is “free” to play her own game.

Gabby eliminated Carl to prove she can play her own game.

Gabby now wants to eliminate Christian to prove she can play her own game.

Two key allies are gone and now she’ll be on her own with four eliminations left to go. Gabby is playing this about two rounds too fast.

For today’s challenge, they’ll balance on a narrow perch while holding a pole connected to a bucket of water. If at any point they step off the perch or raise the pole too high or drop the pole too low the bucket will empty and they’ll be out of the challenge.

I should note everyone is balancing the pole on just one palm. This is going to go damn fast.

Mike barely moves and he is out. It was subtle.

They will now shift to putting their front foot behind their back foot. Gabby flips out when she slightly moves. She is PISSED.

The other six successfully make the transition. Impressive. They will be in this position for ten minutes. I’ll be surprised if it goes all ten minutes.

Alison drops out uneventfully. Christian is wiping his own face.

Angelina is out too. Everyone else is sweating.

Now they will move their front foot behind their back foot again again. They will go for twenty minutes. Angelina and Gabby are coaching Nick to go higher.

CHRISTIAN: Am I good?

GABBY: You’re all good, we’re just helping Nick because his was super obvious.

Way to disguise the plan guys.

Kara’s pole is dropping a bit. Davie has a fly on his nose. Christian’s hand is twitching. Alison is too nervous to coach in case it psyches somebody out.

Christian steps off the perch. He is uncomfortable.

Davie barely budges. He is out.

Kara wins immunity! The Kaoh Rong record is tied as we have our sixth unique individual talisman winner in a row.

ALISON: I am cautiously optimistic [Gabby’s plan] it will work tonight. We’ve tried to get Christian out twice before. What’s to say he doesn’t pull something out of his hat a third time?

Indeed, Alison. It’ll be tough to blindside an intellectual with an idol who has just four rounds left to play it.

GABBY (confessional): What bigger move than to go against your biggest ally in this game?

And leaving you unprotected for the remaining seven days of the game and be at Alison’s mercy.

Gabby successfully lures Christian into thinking Alison will be taken out tonight.

Gabby reveals the plan to both Davie and Nick.;

After Gabby exits, Angelina, Mike, Nick, and Davie talk about what will happen if Christian plays his idol. How about they write down Gabby? Hopefully Christian really goes.

Davie doesn’t want to lose Christian tonight because he is using Christian as a shield. So who tips off Christian about Gabby’s planned backstab? Christian believes Gabby and Nick both really want him out. He realizes Nick felt uber betrayed, and wants to repair the relationship with Nick in order to avoid playing the idol tonight.

Mason-Dixon try to re-draw the lines on the sand. Nick has no intention to repair it, but will manipulate the hell out of Christian. He agrees to write down Alison’s name (but obviously won’t).

Christian hopes he isn’t required to play the idol tonight.

Nick talks about his frustrations with Christian over the Carl blindside, but he rebuilt the relationship (wink wink).

Gabby talks about wanting to do things with confidence and be potentially voted out with newfound “gumtion. . .gumsion. . .gumshun. . .gumtion”.

Angelina does not identify all eight as equivalent threats.

GABBY: If this works I am losing my closest ally and best friend in this game.

Saying “I am voting my closest ally” didn’t quite put the brakes on this, eh?

Nobody else’s votes are shown.

If anybody has a hidden immunity idol, now would be the time to do so.

CHRISTIAN: Can you hold on a sec? Not quite sure yet.

Christian studies everyone’s faces. He plays the Idol Shoe. All votes against him don’t count.

Gabby apologizes to Christian multiple times as she exits. Everyone is somehow smiling after the vote. Nobody will be upset tonight.

Next Time on Survivor: Everyone is on the chopping block. . .except maybe Kara.

Timing is everything on Survivor. When do you turn against your closest ally? Was Gabby already doomed to lose this season because she was permanently marked as a subset of Christian’s game by day 30? That would be an interesting topic to tackle. Every contestant believes they always have a chance of winning at all times. Nobody wants to think of themselves as being the person who will get shutout in a jury vote. Seeing players who are probably not winning make moves with the goal of trying to win is always interesting to see on Survivor.

And seeing them have their plans backfire in a ridiculous fashion is always entertaining to see. I can’t recall a situation quite like this on Survivor.

Natalie Anderson won Survivor: San Juan del Sur by being a solo strategist for nearly the entire season. Especially from Final Nine onwards. She didn’t need a partner/twinnie in crime.

Here we have a season where seven individuals truly means we have seven individuals. Christian, Alison, Kara, Davie, Nick, Mike, and (we’ll get there) Angelina all are willing to vote anybody else out at any given time. Anybody who has been sweeping their Survivor fantasy pool this year should be given a trophy, medal, a participation ribbon, and an extra ration of rice.

Mike White and Kara appear to be the two most secure players in this game. . .but with another idol presumably re-hidden, that could all change very very quickly if it falls into the wrong hands.