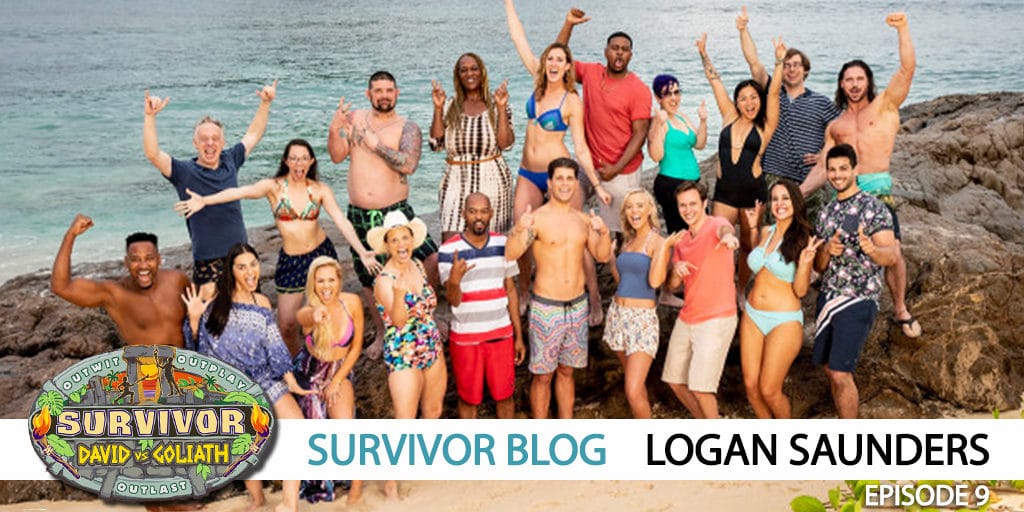 Logan Saunders recaps episode 9 of Survivor: David vs. Goliath ahead of episodes 10 and 11.

Carl and Nick had two advantages, and while Alec and Alison have a bond with the Davids, it didn’t stop them from sticking with the Goliaths. At Tribal Council, Davie played his idol which frightened Angelina. But the Davids had a different target. . .sending John to the jury.

DAVIE: It’s season 37, guys. I feel like the game has evolved enough to where we respect each other’s gameplay without taking it personal.

Or rather, the game has evolved enough to where players know how to pull off blindsides without being dicks about it.

Davie goes into a WWE promo as he shows off wearing John’s jacket. What the hell is the deal with everybody obsessing over the jackets of the departed this season?!

Alison, Alec, and Kara talk. Alison wants to make big moves now. Alec thinks it is #GoliathStrong for too long.

Dan sits alone on the beach away from everybody else. He is annoyed he played on an idol for someone who didn’t need it (nor is a key ally). He is surprised the other three had a chat for over two hours without Kara pulling him aside.

NOTE: This supports a common theory that the Dan-Kara bond is a one-way relationship where Dan is far more invested in Kara rather than the other way around.

There’ll be two teams of five. Make way through obstacles, retrieve numbered tiles, go through a net crawl, unlock a combination lock, there are snake puzzle pieces, put the puzzle together, and reward is theirs.

I dunno why, but there are clearly three tables in the endzone when they initially show the challenge.

CARL: I feel like I’m at Exile all over again.

The team full of dudes makes it through the course quickly. Mike is unlocking the chest. The weaker team is about a minute behind. Christian does it for Purple.

Mike unlocks it but pulls a Jay and forgets to cover it. Alison picks off the numbers. The dudes all start shouting random numbers to throw off Christian. He gets it about ten seconds later anyway.

Alec and Kara solve the puzzle! Alec starts hopping around like a bunny rabbit on stilts. Christian channels his inner Brochacho and punches the table.

Gabby thinks this reward loss will help her persuade Alison to join her.

Angelina cries over the presence of veggie burgers.

Meanwhile, Gabby and Alison talk in the shelter. Gabby has pitched the Dan ouster once more. Is this the third episode where they have discussed ousting Dan? Alison is eager to have a full-time working relationship with Gabby.

We cut back to the reward. Davie takes a stroll and the other four are all Goliaths. Mike wants to solidify #GoliathStrong with Dan, Kara, and Alec.

MIKE: We can’t be little bitches.

DAN: Why don’t we just go after Christian again?

Kara doesn’t buy into GoliathStrong again because she needs Dan out of the game.

I agree–Mike is not reading the room. Tribal lines blatantly don’t exist.

Kara rats out Dan’s second idol to Alec and Alison. Alec laughs at the idea of Dan telling the “charming girl” about his second idol.

OK, they are making it waaaaay too obvious that Dan can’t go home this episode.

Davie wakes up super early to go idol hunting for a replacement idol. All of the Davids are aligned well and are searching. We get some funny graphics as Christian divides everything into sectors. It’s actually a worthy strategy in an era of easy-to-find idols–just search everywhere a little bit rather than few places a lot.

Christian finds the Magical Blue Yarn. Inside is an idol.

CHRISTIAN: I think I am a target now and I think forever.

Dan’s talisman is taken back. Race through to retrieve balls. Balance the balls over a balance beam. Then maneuver each of the three balls through a snake table maze. Once all three balls fall into slots, they win immunity.

begins and ALEC LEAPS OVER THE ENTIRE HIGH STEP AT THE START! HE SAVES AN INCREDIBLE TEN SECONDS!

Everyone has to transport a ball on a paddle over the teeter-totter. ALEC LEAPS OVER THE HIGH STEP AGAIN FOR HIS SECOND BALL!

Dan has all three as well as Alec. They begin the snake maze.

Christian nearly punctures all of his teeth on the teeter-totter when he falls.

Lots of players are now trying to get the balls through the maze. Alec is the first to land two balls. It is a very long track for the final ball.

Alec lands the final ball and wins immunity! Goliaths sure love the talisman. Ah dammit, Probst points it out too.

Dan still wants to go after Christian. Supposedly he is the head of the snake.

Kara continues being morally conflicted about Dan. She wants to split votes because of Dan’s idol. She approaches Gabby and Nick to split between Angelina and Dan. Nick and Gabby instantly agree.

ALISON (confessional): The Davids are on board too fast…plan is to stay strong with the Goliaths.

Dammit, if Nick and Gabby only pretended to hesitate.

Alec agrees with Alison in a side conversation. They tell Kara this as her jaw drops. They even joke about her face.

KARA (confessional): I have to switch my game dramatically.

Alison and Alec are dictating the pace of the game. We went from inter-tribal alliances to everyone being segregated.

The Davids get together and discuss all three of their advantages. Do you use all three?

Steal a vote? You make it 6-5 and Davids are the majority. No other advantages are needed at this time. It goes 5-5 and the idol and idol nullifier will be key next round.

The only caveat is if Goliaths play the idol correctly…but then if Christian plays the idol correctly it’ll be 0-0, and the Steal a Vote is still active in a revote to 100% guarantee a Goliath gets knocked out.

ALISON: For twenty-something days I was in LaLa Land. Now it’s time to wake up. Wake up!

We get some analogies and everyone frustrated about the lack of people being able to have inter-tribal alliances.

It’s time to [steal a] vote! Nick is stealing a vote.

Nick steals Alison’s vote. Davids must know that Goliaths are going to play whatever idol they found.

Alison nods at Alec and Kara. Alison is in complete despair.

Davie pops his collar when he votes.

Dan whispers to Kara if he should play his idol for Alison. Kara whispers something back as she looks like she is ready to throw herself off of a bridge.

Did Carl play his Idol Nullifier? ‘Tis a mystery.

PROBST: Playing it for yourself?

PROBST: This is an immunity idol. . .and this is an Idol Nullifier.

Christian doesn’t play his idol. I think I know whose idol Carl nullifed. . .

PROBST: The Idol Nullifier was played against. . .Dan.

And the Idol Nullifier will DEFINITELY be coming back in future seasons.

Dan, the tribe has spoken.

Christian has his idol, a new one is re-hidden, and Davids could obtain a second idol and gain majority next round.

Will Alison and Alec be convinced to switch?

Will we finally have blurred lines thicker than Robin Thicke?

Next Time on Survivor: When you’ve been betrayed, hell hath no fury like a woman scorned.

DAN: WHO WOULD’VE GUESSED THERE WAS A DOGGONE IDOL NULLIFIER? It took the Davids an idol and two advantages to flip this game around. I take pride in that.

Well, at least Dan wasn’t silly enough to go home with an idol in his pocket.

The Davids aligned together out of necessity these past couple of rounds. Now that it’s 5-5, it will be interesting to see if the Goliaths disintegrate.

We go to rocks next round and a Goliath goes home so it’s 5-4.

Then the same thing happens for the Davids again and we keep going until Final Four where we have that firemaking challenge to decide the Final Three.

That’s what will happen. And you thought recent seasons had too many twists? You ain’t seen -nothing- yet!

I am surprised John wasn’t practicing his wedding vows from the jury bench.