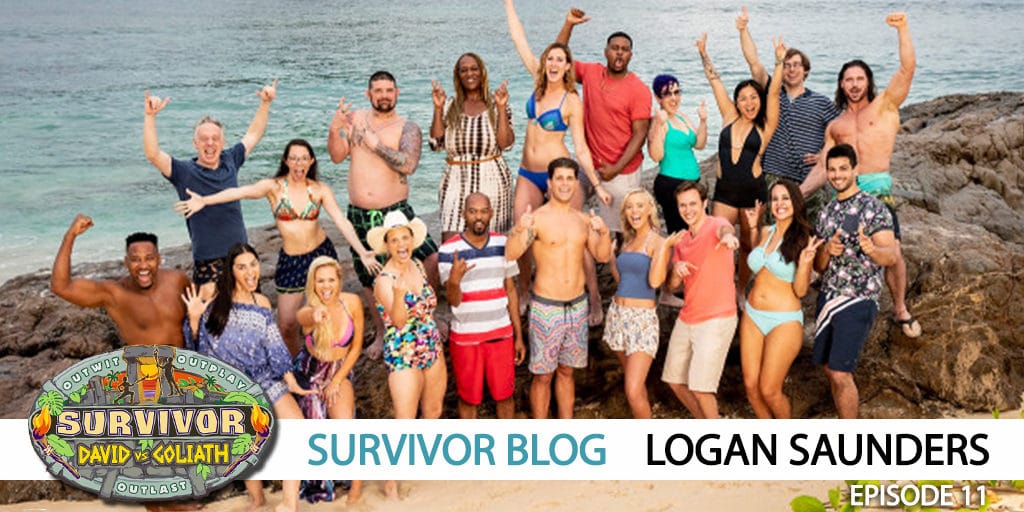 Logan Saunders recaps episode 11 of Survivor: David vs. Goliath in the second of two blogs from the double episode ahead of episode 12.

CARL: We hold the f–king power and they don’t even realize it.

NICK: It’s a thing of beauty.

CARL: It seems too easy.

Alison and Christian cry together.

ALISON: I wish the two of us can join brains.

Alison thinks she is the biggest physical threat in line. She is praying Christian and Gabby shall join up with her or if her passiveness shall bite her in the doctoral rear.

Climb up a ladder. Leap off. Dive down to retrieve buoys. Dunk the buoys into baskets at a slightly elevated height. First tribe to dunk all of the buoys wins reward.

Schoolyard pick where one person gets left out shall determine teams.

Everybody climbs up the ladder. It is a huge jump into the water. Davie kicks his legs back and forth as if resisting the jump.

Kara retrieves both lines of buoys for her team. Angelina and Davie do so for the other team.

Alison retrieves the rest for her team.

Davie tries dunking a buoy first and misses. Mike  messes up next. This is funny to watch. I’ve got Hoop Dreamz, coach. Carl doesn’t even get close.

Purple finally gets there. Nick scores easily to overtake them. Davie has major hang time as he gets one. Carl does it next. Eventually we tie up 2-2. Davie and Carl score the next two for their team.

Carl sits down for exhaustion. Davie lands the final buoy.

Carl -earns- his first reward of the game.

She just had nachos. I know a reward victory is key, but c’mon, nachos is an equivalent reward which they both won.

Kara, Davie, Carl, and Mike ride off on the boat together. Kara fears the tribal lines being intact.

Carl a.k.a. Slimmy Sly gets loose. Where the hell did that nickname come from?

Mike and Kara suck as many kneecaps as possible around Carl.

KARA (confessional): It is apparent he loves beer.

CARL: Alison has to go next. . .the only person who will have a problem with that is Gabby.

Carl and Davie are plastered as they can barely coordinate carrying the cooler of beers.

DAVIE: I get my Black card continuously taken away from me by my homeboys. . .I dunked like Shaquille O’ Neal. Ain’t nobody taking my Black card no more.

MIKE (to CARL): If you need us to get Alison out or something, we’re here to help you.

KARA (confessional): He is drunk off power in this game and drunk off this reward.

His judgment is impaired in more ways than one. This is one of the best reward scenes this time.

Gabby and Christian talk about how they need to prove they have agency in this game, otherwise they will be perceived as being subservient to Carl and Carl will get credit for everything.

Carl rounds up his troop except Christian and Gabby.

Angelina is ecstatic to hear she is more trusted than Gabby.

Carl tells Christian the plan too, including the part about lying to Gabby about the decoy boot.

CHRISTIAN: I defer all of my strategic planning to somebody who is half sloshed.

Here’s the thing–Carl is such a transparent player. He is such an easy out. It all depends on whether you want to roll the dice on Nick and Davie willing to hang onto Carl as an ally beyond when Carl targets your own allies.

Given the relationships Alison has with Gabby and Christian, using Alison as a Goliath rather than Angelina is more beneficial for them. That’s what this round is essentially coming down to.

Christian asks Mike to flip to his side with Gabby, Alison, and Kara. Mike White is now the one sober with power.

Christian and Gabby watch the sunrise. Christian tells Gabby about the lie.

Davie saw Christian and Gabby at sunrise. Ya think telling Christian he has to lie to Gabby may not work when you see interactions like this?

Angelina estimates they will be out of rice within a day or two. Uh oh. She loves taking university level Negotiation courses and wants to put this to use with Probst.

Christian nearly gets put in handcuffs by Probst as the talisman is retrieved.

They will race over an obstacle, run around a post, cross a balance beam, retrieve three clusters of puzzle pieces, and then stack a vertical word puzzle. First to do so wins individual immunity.

Angelina is upfront she is lowballing her offer to get more rice from Probst. He don’t give a damn and says if somebody sits out he will give them rationed rice. Angelina volunteers.

Everyone channels their Inner Alec as they leap off of the first obstacle to save 1.2 seconds of time.

Everyone gets Tess-like dizzy when they spin on the post. Davie and Carl look slightly less drunk than they did during the reward. They feel coordinated by comparison!

Davie is first to start stacking the eleven blocks. Nearly everyone is joining in on the puzzle. Gabby is last to cross.

They have an eleven-letter word with thirteen letters.

PROBST: We’re looking for one specific word and it’s not PERCEPTIONS.

Davie and Carl were nto only drunk with power but drunk with vocabulary.

Mike is more agonized by his beard than the situation of being a swing vote.

The jury walks in with the most intimidating music possible like they are about to take everyone’s lunch money.

At the start of a merge it was a scrambled egg and now it is a poached egg.

NICK: Alison has had scrambled eggs for so long and now her breakfast is different today. That’s why she feels paranoid.

Or being told a minimum of four votes is coming her way.

There are discussions about everyone being very specific about their interactions rather than being blatant about scrambling.

ANGELINA votes ALISON. Get her before she gets you got.

Chorus of “bings” and “dings” are heard as Carl exits.

Nick is uneasy. This is the first time a vote has not gone his way. I have a feeling we will see a new side of Nick very soon.

Next Time on Survivor: Family brings everyone together, but the ultimate betrayal breaks the game wide open.

Carl didn’t see the plan coming. He compares it to driving his truck.

Heading into the merge, I said Vukus were going to be amongst the early boots. I didn’t quite expect it to go down like this.

Carl’s game has two components to it:

Carl’s lack of awareness of the personal relationships going on around him was definitely his downfall. There were times when Carl was being deceptive, but couldn’t figure out who should receive all of the honesty and who should receive a concealed version of it. Letting certain Goliaths into his ring of trust? That works. Letting Gabby’s closest ally know he doesn’t trust her? That doesn’t work.

There are a ton of smaller bonds within this game. I don’t buy it that Alison, Kara, Mike, Christian, and Gabby intend to go F5 together. You would think it makes sense–Three Goliaths and a pair of Davids who have an idol makes the alliance very level and competitive.

However, the micro bonds involving Nick, Davie, and Angelina makes that alliance of five very very complicated. I suspect we’re in for a very inconsistent and wonky finish.

Alison has been my winner’s edit pick for a while and I am sticking to it. I don’t see her being a prime target for a while. There will be so much disorganization that I can’t see her name being brought up until it is too late.

What’s crazy is this season is the polar opposite of last year–Remember how we narrowed it down to a Wendell or Dom victory by about episode eight or nine? Here we have eight players left and everyone is arguing any of these eight players could win. Editing has definitely improved. I can’t think of a time where I could see how each player wins this season on day 39. They all have a path to it.

It’s just a shame we have to condense all of this into three very condensed episodes. Good luck explaining everyone’s interactions in that time as recent seasons have proven this to be a hell of a task–probably something more torturous for editors than what we saw in the first immunity challenge.

P.S. Conspiracy theorists will be on full throttle with PERCEPTIONS being rejected as answer. It’s a word! You can’t say “sorry, we are looking for a -specific- word!” It’s like if I asked everybody to pick a number between one and ten, and the winner picks the number I was thinking of in my head. It doesn’t work like that, man. This is Survivor.