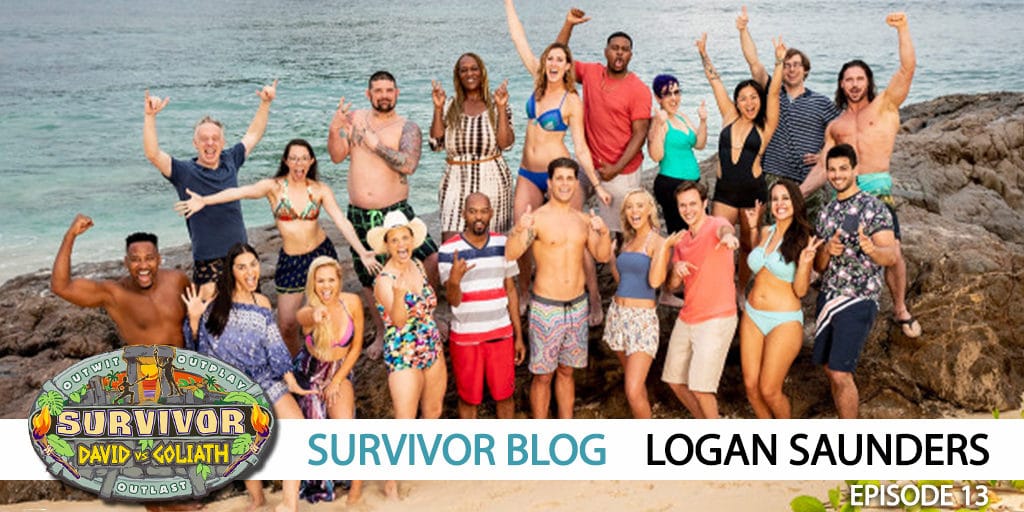 Logan Saunders recaps episode 13 of the Survivor: David vs. Goliath ahead of the finale.

Previously on Survivor: There were four Davids and four Goliaths left in the game. Right before TC, Gabby and Nick realized Christian was a big threat, just as all of the Goliaths had already one. Davie warned Christian and saved Christian for the second time this game. Christian played his idol, and his closest ally went home.

Seven are left; who will go home tonight?

Christian’s nine lives are pointed out. Nick wants to find the newly inserted idol. To ensure no one else searches, he plants a fake idol.

Nick has a brilliant plan of finding his planted fake idol in front of Mike, Angelina, and Christian. They are all excited for him.

Are they that gullible?? We shall see.

Mike informs Davie and Kara about what happened. Davie catches on to Nick’s hoax and starts searching on his own.

Davie’s secret plan is to eliminate Nick. He goes up to Christian and claims Nick has TWO idols. Therefore he MUST go home. Christian is happy the target on his back is deflected onto the enemy.

They will be attached to a rope. They must race to gather the rope, and then over and under a series of obstacles. They must use sandbags to knock over a stack of blocks. The first person to do so wins individual reward. It’s the San Juan del Sur season finale reward challenge.

Winner goes to a beach club and have access to their entire menu. They will come back after this massive meal.

Davie is first to start knocking blocks off. When he collects his lost sandbags, he doesn’t have enough rope. Sucks to be that guy. He limits himself to tossing just two sandbags at a time.

Alison is next to throw but she throws like my sister. Probst’s niece could beat both of them.

Kara, Christian, Angelina, and Nick are all in it. Angelina can’t even collect her lost sandbags due to a lack of slack. Kara has the same issue. Lots of backtracking.

Davie is down to two blocks.  Now one. Nick is down ot his final block.

Davie tosses. . .and scores the first true individual reward of the season. Nick is exhausted.

Davie will be going on reward and miss out on idol hunting. Better take Nick, bud. Who’s coming, Davie?

Davie takes Nick to “repay the favor” for bringing him on the family visit.

Nobody pleads their case. . .except Angelina. She rooted for Davie and sacrificed herself for the rice. She also helped Nick pick Davie for the family visit too.

Davie ignores Angelina’s pleas and brings along Kara. Kara gets yet another reward. It’s amazing how much Kara can blend into everything that is going on but yet not be downright invisible.

ANGELINA: I didn’t want to use sacrificing for the tribe as currency but. . .he chose Kara. Davie is really playing the field.

Angelina trying to take down Davie? That should be fun.

Angelina announces publicly she is bitter and pissed at Davie. “She chose Kara over me.”

She brings up the rice issue and is fuming. They make the BIGGEST pot of rice ever.

ANGELINA: It was Revenge Rice.

Is it at least crispy?

Davie makes a Goodfellas analogy. He took a page out of Mike White’s book.

As Nick walks away, Davie plots against Nick with Kara. Nick. Has. Two. Idols.

Kara is drooling chicken grease when hearing what they’ll be doing.

Kara, Nick, and Davie return to camp mid-afternoon. Kara wants Alison to be that critical fourth vote to oust Nick. Mike and Angelina shall be left out.

Alison and Kara, my initial picks from awhile ago, could very well have a clear path to day 39. Their names aren’t coming up once.

ALISON: I want to work with Mike as a pair.

Mike is more than happy to ride the middle. . .but this conversation makes him look like #5 rather than #4. Plus Nick is one of his most reliable numbers for a very long time. Mike could really mess up this game.

Probst’s Thanksgiving Buddy is going to dictate how this whole game closes out.

Davie wakes up prior to sunrise. We’ve seen this post-merge scene too many times.

It’s a clue. . .to an advantage that Davie finds. Return to the spot of the merge feast. A storm is abrewing. Everyone is huddled in the shelter. Rain is pouring down. Davie sees the advantage next to a wok of fire.

Davie summons God to make the choice for him. He waits for God to blow the flames towards an urn. The flames blow -away- from the urns.

So Davie gets saved in a way that Chris Noble hopes he was saved last season–there is no dilemma for him. The idol has to be played -this round-.

Another day of rain.

Stand on a narrow perch. Balance a ball on a wooden disc. At regular intervals, balance more balls on the disc. Fall off the perch or lose a ball and you’re out of the challenge.

Given the rain and wind, this challenge should be ridiculously fast.

Everyone survives the first ball.

Now we go to a second ball. I can’t tell if they’re shaking or shivering.

PROBST: Which is worse? Balls separating or balls clinging together giving you that uncomfortable feeling. . .in this challenge.

Alison, Mike, and Nick are all hanging on.

We’re down to two Goliaths. Mike needs to win this for us to have a record number of individual immunity winners without repeating.

They’re in the final round. Three balls. No more rounds. We go until it’s over.

Alison drops! Season 37 and we have a record for wins!

Angelina runs out to hug Mike.

Mike is less nervous about swinging from the hip–he can be completely selfish at TC tonight. He gets to write the screenplay for tonight. It’ll be a rare experience of writing a horror movie as someone meets their demise. Who gets to be his Janet Leigh?

Nick is now more worried about the number of Goliaths rather than Davids. Alison makes him nervous.

Kara is grinning to hear this out of Nick’s mouth.

Mike has had Christian on his mind for five rounds. Nick or Alison’s elimination does not please him.

MIKE: Are we doing something stupid????

And Mike pitches this approach to Kara, Alison, and Nick.

Mike is trying use his talisman as leverage but no one is budging.

Nick and Davie talk in the shelter. Nick reveals the truth about the fake idol to Davie.

Davie completely rethinks his plan to eliminate Nick because of his honesty. Davie agrees to go after Alison.

Mike tells Nick that Davie is gunning for him. Man, Mike is unaware of Nick and Davie’s bond. Can Mike successfully manipulate Nick?

They have a long talk about loyalty and scrambling. Christian has been super quiet this episode.

It’s time to vote. Everyone has that Earl Cole-esque puzzled look on their face. It’s like they are half an hour into a difficult Sudoku game.

Davie plays an idol for himself.

Nick plays the idol by the raft. . .nah, it’s a fake one. Nick tries to get a read on everybody decides to play his real one. Yikes.

Well this is a mess.

Alison is the real cat with nine lives.

Both Davids wasted their idols. Oh no.

Nick and Davie will need to find their two re-hidden idols.

Only six are left. Who will claim the title of Sole Survivor?

Christian is surprised that he was such a huge threat. Eighteen votes! Props to editors for surprising us with his elimination. I didn’t see it happening at all. They’re learning from New Zealand Survivor.

The penultimate episode is over. This means. . .sigh.

I don’t care whether or not Rite of Passage is removed to make up for the limited amount of airtime or cutting into the reunion show to further make up for it–it’s still way too rushed for finales.

We learned that all the way back to when they initially experimented with that in Cambodia, and they didn’t even have a mandatory fire tiebreaker yet. Game Changers isn’t even like a real Survivor season, so nobody cares about that. But Ghost Island made it quite clear that it was way too rushed.

When it happens multiple times where we cut from Tribal Council directly to the immunity challenge, you turn Survivor into a highlight reel of a highlight reel. You’re going to spend the next day reading endless exit interviews to get a grasp of what happened in the game’s final days. We already lose a ton of content to begin with in regular episodes! Why do we have to suffer from this to an extreme in the finales?

During episode one, I projected an Alison win with Kara being up there at #2 or #3 contender. I shall not waiver from this in the finale. Alison and Kara are the tightest pair, and I think they’ll be able to pull in Davie to get out Mike White. I sense we will get a 3 vs. 3 purple rock scenario next round. One of them is bound to find an idol during this re-hide.

Speaking of idols, will BOTH be re-hidden in the finale or just one? Survivor loves idols being hidden in finale episodes, and we could see consecutive rounds where idols are re-hidden.

Angelina should be guaranteed a F3 spot. It is one request she can make which I think everyone is going to grant.

I think Mike White will be cut just before Final Three. Something tells me he stuck out his neck too far with the Christian vote. Hell, Davie may agree to eliminate Mike White out of fear of the Jabeni bond.

Davie and Nick will likely be eliminated in fifth and fourth place as they will be threatened by each other’s success up to this point in the game, and whoever remains at F4 will lose both the immunity challenge and the fire tiebreaker.

Alison, who was perceived as a threat since the start of the merge, will receive major kudos for dodging eliminations so many times post-merge. How many times can you avoid going home by just one vote?

Hell, I could see both Kara and Angelina shut out at FTC. Whatever questions the jury asks Angelina I am sure will be very entertaining. We’ll get there. No, really, we’ll get there.