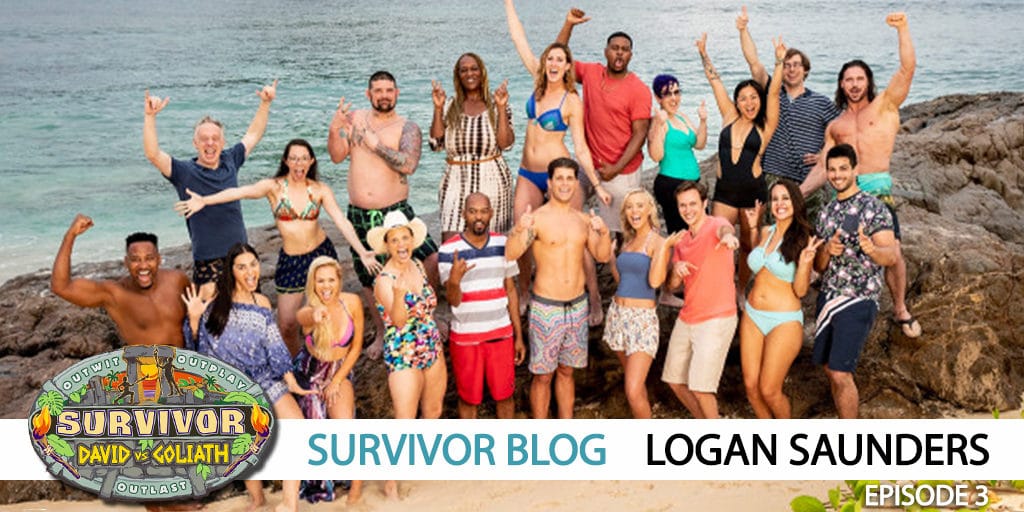 Logan Saunders recaps episode 3 of Survivor: David vs. Goliath ahead of episode 4.

Previously on Survivor: Natalie had no filter and Jeremy had no boundaries. At the David tribe, there was a plan in place, but when a new alliance formed, the decision was in their hands. At Tribal Council, Christian and Nick blindsided a teenager. Leaving Bi, Davey, and a hilariously cartoonish Carl stunned.

Eighteen are left; who will be voted out tonight?

Carl is sitting with a huge hat under the stars like he is Crocodile Dundee. All he needs is a jar of salsa.

Davie talks about how he was played and impressed by it. However, he still has an idol.

Davie pulls Christian aside he viewed him, and Nick was his number one. Christian attributes the blindside to Gabby. Davie is now focused on Gabby. Good play, Christian.

Mason-Dixon goes off on their own to celebrate. They both agree to throw Gabby under the line and have her take the blame. This preserves themselves as a power duo.

Carl now has Benjamin Wade’s cane as he stares out into the water. Jessica was like a daughter to him. A daughter who lies about her age and lived with him for only six days. But seriously, this is emotional for Carl. It amazes me people grow this close within a week. I completely understand this feeling as I have traveled through small hostels in Europe and South America where you are super bummed when somebody must leave.

Bi is woke. She is ready to play. She compares it to MMA fighting. Her gameplay is being adapted.

Bi goes up to Carl and Nick. She says she blames Gabby because she is deceiving and cries a lot. Secretly, it is “a lot personal” for Bi to eliminate Gabby.

While this goes on, we get a series of Gabby bikini shots. Dan is drooling from home.

Mayor of Slamtown talks about pro wrestling with Jeremy. He is a provider.

MAYOR: I am getting better at old school people skills…it’s not just about skeeving and figuring who gets voted out next…it’s about growing as a person and connecting with people.

Mayor and Kara talk about catching a series of crabs named Sea Bass. I know it’s not Sea Bass because its eyes are clear.

MAYOR: Natalie is used to being the Boss Bitch… .but I trust Natalie and I feel like Natalie trusts me…I think she will be valuable if I can get her past the next two Tribals.

Jeremy and Mike White go hunting with the spear. Mike likes Jeremy because he bosses him around. Jeremy talks about waking up “at the butt-crack of dawn” and go fishing with his dad. However, his dad also has Alzheimer’s.

It gets surprisingly personal that his dad won’t be able to see him show appreciation for him, and how his dad was right about everything.

Mike is afraid that Jeremy will be his own worst enemy down the line and doesn’t want to be taken down with Jeremy as Jeremy will do anything to win.

GABBY: What do you think of the logistics of Slamtown?

CHRISTIAN: I can’t wait to hear about Slamtown.

GABBY: What are the citizens called?

They have a rivalry with the folks in Saturday Night Slam Masters for the SNES.

Nick, Bi, and Davie are on a raft as Bi keeps pinning blame and suspicion on Gabby. Nick agrees because it works into his plan and is feeding the Fear of Gab.

Nick worries about Gabby breaking up Mason-Dixon. . .so maybe Gabby shall be sacrificed. I think that will erase the line.

Mayor of Slamotwn talks about how smart fish can be depending on size and how “scaredier” it can be. Oh. That hurts my ESL background big time.

Jeremy sees too many side conversations. He approaches Kara with his paranoia. Kara denies the side strategy and is not strategizing.

Everyone is around the fire as Jeremy announces his paranoia of side conversations to EVERYBODY. Dare I say that is IT-EEE-OTT-IC.

MIKE: Jeremy is right, but he is the person he should be speaking to. He needs to stop strategizing.

Mayor and Angelina talk about Jeremy’s tribal meeting and how maintaining status quo benefits him as it means Natalie will go. If people start strategizing, a threat like Jeremy would be out.

Jeremy is angry as he lays down and watches Dan and Kara flirting in the water. Jeremy retreats to the shelter telling Alison and Alec that Dan has the idol. Jeremy then talks to Shaman in the jungle about Dan having the idol.

JOHN: He must be paranoid enough to want to stop having all these side conversations…and then tell everyone who has the idol.

Early diagnosis: Jeremy is at a ridiculous amount of risk this round.

It is POURING RAIN. Goliaths can barely remember who Jessica was. Most of them can barely see.

Probst is amazed by how many smiles he sees despite it being a record for rain in an immunity challenge.

One player from each tribe will maneuver their way through an obstacle. Three other tribemates will help untangle rope. They’ll then hook a sled. Pull asked. Then solve a small pyramid puzzle.

They’re playing for immunity and reward as the clouds roar once more!

They’re playing for blankets, pillows, hammocks, and chairs as everyone yells at him to cover it back up.

Natalie wants to do the puzzle. Natalia and Angelina, who I cannot tell apart until just now and rewinding a couple times to notice Angelina’s booty is bigger than Natalia’s. She is also slightly taller.

Alec and Bi are going through the ropes. Alec has somehow tangled himself temporarily at the end of the rope which allows Bi and Alec to finish the first stage simultaneously.

Lyrsa, Davie, and Nick are going through the tangled ropes.

Mike, Kara, and Jeremy are going through the tangled ropes for Goliaths.

Both tribes finish being untangled simultaneously.

Everyone now joins in to try and hook the sled.

Dan and John are hooking for Goliaths while Elizabeth and Carl try hooking for the Davids. I have no other way of phrasing it.

Shaman of Sledtown hooks it despite Elizabeth working with ropes her whole life as well as Carl. It doesn’t matter much as the Davids hook it seconds later.

CHRISTIAN and GABBY vs. NATALIE and ALISON

It is a four-piece pyramid puzzle. Bi says aloud she injured her knee. That will be important later.

Angelina is cursing. She sees the Davids are on the verge of solving it.

NATALIA (to PROBST): I believe Angelina would have solved that puzzle…sometimes you have to say “I can’t do it.”

Natalia plans on writing a smiley face next to Natalie’s name and has no desire to be bossed around by Natalie anymore as she does in her everyday life.

Gabby is ultra-chipper after winning reward. Much like at the challenge, she can’t help but shake her shoulders in victory.

Everyone is speechless with how casual she is about tearing her MCL which is a previous MMA injury.

Jeremy and Natalie talk about being Black again. Natalie asks for Jeremy to vote with her.

JEREMY: Truthfully, I don’t think you have the support.

Natalie thinks she is normally good at puzzles.

Angelina pitches the idea to Alison that Jeremy is stirring the pot right now and should worry about Natalie as an easy second vote. Angelina says that she can convince cops to avoid being assigned speeding tickets and convince waiters to get discounts at restaurants.

Mike White is in one of Angelina’s group talks to eliminate Jeremy. Mike really wants Natalie to go since she is the weakest.

In another group talk, Natalia disagrees with Angelina about eliminating Jeremy because Natalie will flop at a tribe switch instantly. Natalia and Nick refuse to vote Jeremy.

NATALIA: Because I don’t like her so much, I don’t care.

Natalie rounds up Jeremy, Kara, and John but then proceeds to exclude Jeremy from the conversation.

Jeremy finds these balls too low for him as he gets into a -major- confrontation with Natalie.

JEREMY (confessional): She is a perfect blend of incompetent and overconfident. She is the perfect person to go.

NATALIE: I was going to have a conversation with them that had nothing to do with you, and you made it about you. . .

NATALIE: This conversation is cut short here…you’ve made it all about you.

Did Natalie ever get to have her talk with Kara and Shaman of Sexy?

Maybe neither of them has ever watched Survivor.

It is raining harder at TC than during the challenge. They talk about the discomfort of the first nine days.

Jeremy and Natalie talk about all their interactions in front of everyone.

NATALIE: He says I’m not self-aware?  You look up self-aware in the dictionary, you’ll see his face because this is how he speaks to people.

JEREMY: If I died right now, nine of these people would be at the funeral. If she died, I don’t think it’d be the same.

The Mayor of Slamtown would give the eulogy.

NATALIE: I am impressed that half of this Tribal Council was about me and be equally impressed if there is a blindside that’s not me.

Natalie commits she is Goliath-Strong if there is a tribe swap and tells Jeremy to stop talking multiple times.

John wants to take the Davids to Slamtown at the next challenge.

On that note, we vote.

NATALIE: That stinging sensation you feel in your eyes right now? That’s some Natalie Napalm. Get off of my island. By the way, your skin is gorgeous, darling.

Mike sighs loudly when he votes.

Nobody plays an idol.

Probst refers to it as a blindside. Surely Jeremy saw at least a couple of votes coming, yes?

Next Time on Survivor: Just when you reached your breaking point, the game flips upside-down.

Jeremy is proud of the game he played.

When you swap after two Tribal Councils during most seasons since Cambodia, you don’t have to worry about keeping the tribe strong whatsoever. Getting rid of Jeremy presented no cons at all.

If you can’t trust him and he is paranoid, and you know either a three-tribe swap or a two-tribe swap comes. . .who the hell cares if Natalie can’t solve a puzzle?

And boy oh boy, I still have difficulty telling Natalia and Angelina apart either by voice or appearance. Does anyone have any tips? I was even trying to go by hairstyle too. I’m suffering here.

I think Gabby is screwed regardless of the swap.

Bi’s knee injury either means she gets pulled from the game or makes it all the way to the end. I don’t see much middle ground. The storyline won’t be disjointedly surrounding her knee.

All four challenges have had small builds. I was laughing at New Zealand’s budget for challenges once again this year, but I must say all three English versions (and Maryland) are in their own class while the Australian Survivor takes the challenges budget to a ridiculous level.

Why bother speculating on alliances and the dynamics within each tribe when we have a swap coming? I shouldn’t bother commenting until next week.