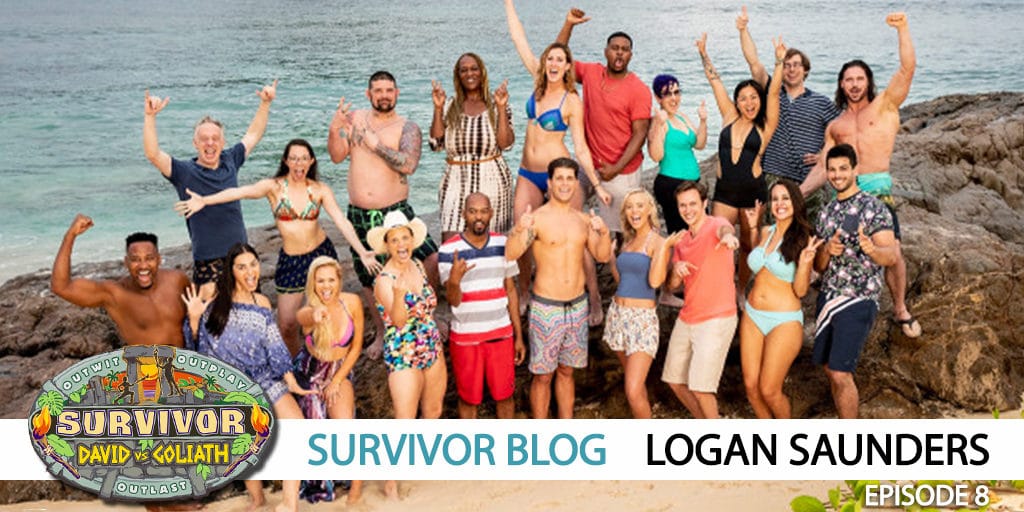 Logan Saunders recaps episode 8 of Survivor: David vs. Goliath ahead of episode 9.

Previously on Survivor: After the merge, Goliaths had an advantage but an alliance formed across tribal lines. Facing Tribal Council, there was a unanimous target but Angelina spoiled the “blindside.” At TC, Elizabeth outed Angelina which stirred the pot and put the spotlight on Angelina.

But Elizabeth couldn’t save herself.

Twelve are left; who will be voted out tonight?

Angelina didn’t expect her name to be dragged through the mud like a Vanuatan pig.

Angelina is doing enormous damage control with everyone on the tribe.

Good luck selling that story, Angelina. No one believes her. It makes things worse for her because it doesn’t fit with everything else she has done the first nineteen days.

Mike and Christian talk about Angelina’s jig being up. Christian reinforces the name of the Strikeforce. Gabby, Nick, Christian, Mike, Alec, and Alison are named after a failed MMA promotion.

Mike reveals his anxieties about Gabby to Christian because she cried for the millionth time.

CHRISTIAN (confessional): Weird thing to say, but at least he told me.

Davie and Nick go into the forest to look for an idol. Davie finds a note. It is the symbol from the merge feast. No text on it. Carl joins them. Davie creates a diversion because the Goliaths are near the tree depicted in the picture.

The diversion works. Everyone was mesmerized by Davie’s karate moves with the fishing spear.

Nick picks up the Vote Steal. Carl repeatedly tells them about the Idol Nullifier. Davie has his own idol.

DAVIE: We started from the bottom now we’re here.

And all advantages are erased due to the Drake reference.

It is another Australian Survivor classic! Everyone has to hold up a sandbag. If a sandbag drops, the team is out.

What are they playing for? One of the greatest pleasures in life…se–oh, pizza. Pizza is actually better in the eyes of some.

A dozen pizzas will be given to the winning team.

Each person has to hold up at least one sandbag–everyone has two sandbags. They are adding an extra rule in that every fifteen minutes someone has to drop out. I am curious how much the sandbags weigh.

Angelina and Gabby are out of the challenge. Aye aye, captain.

The trading off begins. So many Aussie Survivor flashbacks.

Christian and Carl are dropping out.

Carl belongs Elizabeth’s back issues as he is having major spasms. Angelina works another future jury vote as she massages his back.

Dan tries to balance three sandbags on one hand. The sandbag on top falls off and the trough drops. He should try balancing two idols at the same time too. What a metaphor for his future in the game.

Angelina wants Dan to be bitten in the ass. If Dan is lucky at all, hopefully only by Kara.

The pizzas are all there except the pepperoni pizzas. There is a note in an empty box saying “Matt Chisholm was here.”

Davie and Angelina decide to kill the chicken.

Mike is thinking about the game and takes a stroll alone. He is worried about going with Strikeforce.

Mike approaches Alec about eliminating Christian due to the size of his brain.

MIKE: Carl and Davie are not going to be able to start some insurrection…Gabby won’t lead anyone into battle. . .

Alec is secretly hesitant because eliminating Christian, despite being a massive threat, would lock him into the Goliaths.

The Goliaths discuss the metagame of leaving in Christian. Mike pitches eliminating him.

ANGELINA: This was my plan. This was my idea. I was trying to lead the charge on Christian…I am having flashbacks to all of those times a woman throws out an idea, and then a man throws out the same idea and everyone goes “that’s a great idea!” …Um, I just had that idea five minutes ago!

Angelina is being used as the decoy boot for Christian. If anything goes wrong, she accepts she’ll be on a bamboo-splitting bed at Ponderosa by tomorrow night.

More Aussie Survivor poaching. There is a buoy held up by two sticks as you stand on a perch. If you fall off your perch or drop the buoy, you’re out.

Kara is out first. Christian cusses as he drops immediately. Alison is gone too.

Davie loses his balance. John drops too. Gabby is out. Carl pretty much throws in the towel.

Alec groans and is gone.

Nick’s sticks overlap is are out.

Now it’s just Angelina and Dan. Angelina’s is high up; Dan’s is low to the ground.

MIKE: I hope the Goliaths can keep their egos in check and we can make this work.

Surprisingly, Mike is not included in that conversation.

Dan and John spread to Christian and the Davids that Angelina is going home.

JOHN: It sucks. He is an honourary Brochacho. It will be a hashtag BrochachoBlindside.

Angelina freaks out about being the decoy to Dan and Kara. This leads to a side conversation between Dan, Alec, and Kara.

Alec tells Nick about the Goliaths going after Christian.

Nick and Davie talk about using the Steal a Vote. How badly do they need a David/Christian to stay in the game? Can they break the Goliaths? Another elimination puts it at 7-4 and perhaps puts Goliaths permanently in power. This is the one scenario where a Steal a Vote can make a difference in Survivor.

We talk about The New Radicals for a while.

Davie plays an idol for Christian and NOBODY expects it. Nobody on Davids or Goliaths.

Dan takes a very long pause as Angelina begs and begs. He plays it for Angelina.

Jesus Christ. Christian and Angelina both look like they are going to pass out.

Soooo Davids completely read the situation correctly and knew Dan would play the idol on Angelina thus they just have to throw one vote away to avoid the revote and make sure a Goliath goes home.

I would love to know who planned the John diversion.

Next Time on Survivor: When there’s a bad breakup, you have to play the field. But there’s always trust issues.

Angelina asks for a jacket.

Angelina asks for a jury vote.

Angelina asks for an idol.

She hasn’t needed any of those three things. Much like Natalie and Elizabeth, Dan should’ve denied Angelina’s request. I don’t know if it was a matter of giving up an idol everyone knew he had, but Dan is going to regret that move. The talisman and two idols meant he was safe for a while. Now he is down to just one lousy idol while the target is clearly on his back.

Christian, Nick, and Davie were the only ones who voted for John. I assume the John vote was due to John being the biggest fan of the #GoliathStrong camp. John wasn’t in Strikeforce or appeared to build bonds with Davids after the Brochacho Tribal Mix-Up.

The alliance of Strikeforce failed as badly as the MMA promotion.

Alec may be the only Goliath who benefitted from tonight’s results. Well, Angelina benefitted too as everything is so shaken up that she can no longer be who the Goliaths dump after establishing a clear majority. Now it’s 6-5 and she is a necessity for everybody once more.

The previews suggest Dan is in trouble. Obviously, that means he is not in trouble.

Alison is still my winner’s pick. There are no fingers pointing at her and is trusted by…well, by everybody in the game. She is floating around nicely.

Producers must be stoked their two biggest characters both had idols played on them. If the battle lines between the two original tribes are still drawn, Nick would have to be a fool to not use his Steal a Vote next round. Carl’s Idol Nullifier can be used after that to allow them to run the game.

Mike White is our current narrator. Who would’ve guessed a Hollywood writer would be our primary storyteller over the past four episodes? Mike White is starting to make some mistakes socially by tipping his hand too much to his own tribe as well as to Strikeforce. He should be gone sooner rather than later.

I hope Angelina sticks around until the end. She’s definitely the funniest and most intriguing character we’ve got.

I assume a Goliath will go home next round and then it truly becomes an individual game. Alec is effectively doing his best to ensure that nobody feels safe and making inter-tribal bonds the only way to keep your name off the parchment from now on. Otherwise, you end up like John.

P.S. If Gabby cried tears of joy during John’s exit, does that count towards Gabby’s crying streak or only if it is tears of sadness? Asking for a friend.

P.P.S. I think Probst really likes that Culpepper fellow. Did you know he lasted twenty-three minutes during that challenge? My god. F Me, Brad Culpepper.