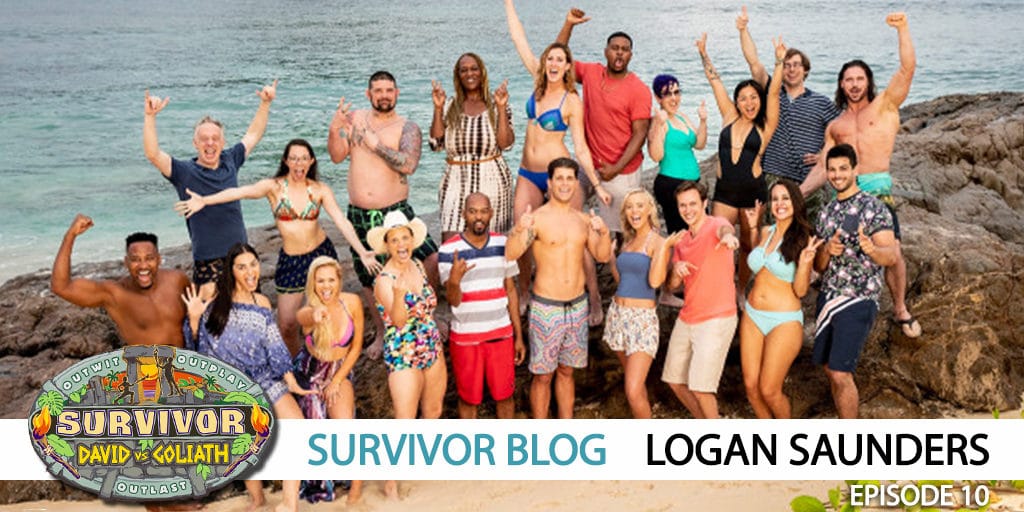 Logan Saunders recaps episode 10 of Survivor: David vs. Goliath in the first of two blogs from the double episode ahead of episode 12.

Previously on Survivor: Alec, Alison, and Kara tried to work with the Davids but trust was an issue. The Davids battled back. At TC, power shifted when Nick played his advantage at TC. Alec and Kara tried to save with the Davids and compelled Dan to play his idol but it was blocked by a new advantage–the Idol Nullifier. Dan was the second Brochacho to head for the jury to make a Ponderosa video rivaling a Chris Noble rap song.

CARL: I feel like I should go in Survivor history for that one. . .let’s bury ’em and ride off into the sunset.

Just in case you forgot Carl was a cowboy.

Angelina discovers who wrote down her name as a “contingency plan.” Well, Davids should ride off into the sunset as long as a million advantages don’t get into the hands of others.

Davids are searching for Dan’s next re-hidden idol. Davie and Nick try to go by process of elimination because they know where advantages and idols have been previously hidden.

Nick finds an idol. . .clue. It is set up the same way as Jeremy’s Cambodia idol where there is a magically lit path to it in the dark.

Two teams of five. Race out to a rope bridge. Cross it. When you reach the finish, land three rungs on a ladder target. First team to finish wins reward. Simple challenge.

There will be a random draw for teams. No captains this time.

The ropes are straight out of Donkey Kong Country. Alec gets through it first for orange. Nick crosses shortly thereafter.

As someone who has done rope courses, this is all core. Alison is spinning around on the second rope. It’s hilarious.  She is getting dizzier than Tess in Survivor NZ.

Carl and Angelina haven’t been on a reward since the merge–they have missed alllll two of them. Such a drought.

Davie and Mike are up. I don’t think Mike’s core is as strong as Davie’s. Davie gets through it in under a minute.

Purple is throwin’ rungs. Nick is assigned to be the tosser. I know, not the most flattering of roles to be assigned.

Christian gets through the ropes quickly. I assume it is about a two minute deficit. Nick lands the first rung.

Alec is the tosser for orange. He is doing better than his pre-merge tossing efforts when he blew that one reward.

Alec makes the next toss and it succeeds. Orange wins reward!

PROBST: What a comeback by orange!

The lead was like two minutes max. That’s not a #OMGBIGUPSET moment.

Orange partakes in the reward.

ALEC: I was the star of the show.

If anything helps you stay safe post-merge, it’s being a star in numerous challenges when you still have nine opponents.

ALEC’S MISTAKE #2: Telling Christian and Gabby in front of the other Goliaths that it wasn’t his idea to target Christian and is over the David-Goliath line.

Gabby has a French Fry in her mouth like a cigar.

GABBY: The Goliaths can jerk us around as much as they want.

We have family letters! Mel White managed to write a letter despite severe arthritis and carpel tunnel.

You know what happens for the next two to three minutes. Tears. Uplifting messages.

Carl stands on the beach as he stares at Nick, Kara, and Angelina going fishing on a raft. He retreats and tends to the fire. Carl is crying about this low. #LoserCheers ensues as they all eat rice.

CARL: You reckon Alec has an idol? If Alec doesn’t win, I want him out.

Much like Elizabeth being targeted by Carl, he says it is gonna be Alec. Kara is surprised by Carl’s overconfidence.

Alec is scared when Kara informs him of Carl’s plans. Alec has an unsettling feeling–more unsettling than eating six wraps. He is vomiting.

Alison is vomiting everywhere too.

ANGELINA: Is she doing yoga?

Yeah, she learned from Zenry. I love Angelina.

Nick goes off to search for the idol and the lit torch with the idol attached to it. Meanwhile, Alison looks like a victim of tear gas as she is stumblilng all over the beach vomiting.

Nick collects the smallest idol I have ever seen and returns to his bamboo shelter.

Alec gives up the talisman without mouthing Probst’s words.

For today’s challenge, they’ll balance on a narrow perch while holding a handle behind their head. Let go of the handle or fall off the perch equals defeat. This is the great Natalie vs. Reed Showdown in San Juan Del Sur challenge.

And we also get the classic Guatemala “If you feel safe drop out for nachos and beer”. I doubt the Vomiteers would drop out for reward.

Angelina, Carl, and Nick drop out so they can eat. Carl and Angelina haven’t had a reward yet so this is not much of a shocker.

As for the other seven? They’re playing.

Here’s a question: Has anybody sat out of immunity and go home the same round?

Mike drops after approximately eleven minutes. Davie accidentally lets go of the perch. Down to five.

CARL: Guys, Alec knows he has to win this

ANGELINA: Alec doesn’t like to eb uncomfortable. You should hear him during rainstorms.

Why? Does he moan and cry and howl at the moon like a werewolf or something?

Kara drops out. Everybody else is stunned. They all assumed she would win this challenge.

ELAPSED TIME: ONE HOUR AND 35 MINUTES

No breeze. No rain. Just sun. Mike and Nick are laying underneath the shelter like a cat.

MIKE: Can I opt out of the opting out?

Probst reports an excess in precision.

Gabby’s tears come alive once more but stands on the perch. Everyone take a drink. These are fun tears, though. Alec keeps declaring he will win this. He is trying to taunt an oddly contorted Gabby.

Gabby steps off after two hours and thirty minutes.

Christian and Alec are left which means–“IT’S DAVID VERSUS GOLIATH!” Oh dear god. Again with this shit.

A breeze rolls in.

Christian is telling a story about plant-root growth.

CHRISTIAN: Oh, this helps me stay focused, Carl. But thank you.

Alec looks more tortured by Christian’s robot storytelling for fifty minutes rather than the challenge itself.

CHRISTIAN: You know what a rubem sandwich is, Jeff?

CHRISTIAN: I can hear my voice for hours.

ALEC: Oh my god. I don’t feel good. I feel like I’m gonna pass out.

CHRISTIAN: I know. I hear you. I might not get this opportunity again. I’m sorry.

So we keep battling.

Alec voluntarily drops out. Christian wins after FIVE AND A HALF HOURS. Alec is walking away upright and looks at the sun.

Alec looks -miserable-. Why voluntarily drop out? There is some sort of change in Alec that I can’t quite grasp.

ALEC: That was the most frustrating moment in my entire life. . .mentally I couldn’t handle it. Standing on a perch for six hours sealed my own fate. I am the only one people are talking about right now. I didn’t come out here to be talked about as a unanimous vote.

Then hang onto that perch, man.

Gabby refers to Carl as a godfather and I doubt she is talking about the WWF wrestler. She is also upset Carl instructed Kara to vote out Alec today.

GABBY: That makes me feel stupider–

Carl brings up Gabby’s emotions to her and boy oh boy that’s a mistake. Gabby and Christian are on the beach as we have days 26, 27, and 28 full of Gabby tears. Tears aside, Gabby has a solid point–Carl’s initial weaknesses I discussed at the start of the season are coming to light now. He is stubborn and has a very rigid gameplan.

Alec has a glimmer of hope as he rounds up Mike, Alison, Kara, Christian, and Gabby to take out Carl. The game of Davids vs. Goliaths is over. Both sides are legitimately talking and working together for once.

CHRISTIAN (confessional): In order to survive, I need to keep threats around or else I am the only threat remaining.

And that is where Survivor strategy has been at for a solid six or seven seasons now.

The flute from Lord of the Flies plays as we enter Tribal Council.

Brochachos impressed when they hear the length of the challenge that Christian won.

Alec says Nick and Carl are awfully confident in this game given they went for nachos.

Carl complains about having only scoops of rice up to this point.

KARA: I’m calling a spade a spade–you were confident enough to win nachos.

Angelina has another “I’ll get there” moment when giving a lengthy explanation about why the bonds between her and the rest of the Goliaths are gone.

Was it a million dollar platter of nachos? Let’s find out.

It’s time to vote as Alec proposes himself to be a meat shield if kept in the game.

Christian has the talisman and idol. Nick has an idol. Neither play out.Mason-Dixon is very secure.

Alec cheers when voted out. He compliments everybody on his way out.

Now we can talk about the elephant in the room–Alec violating the NDA agreement by posting a photo on Instagram and being banned from the reunion. It seemed like he left the game without bitterness towards players and/or production. So what gives? Jeremy has accused John and Angelina of borderline adultery, and was accused by Natalie for intentionally injuring her in a challenge, and he can still go to the reunion.

We have our second unanimous vote since the merge. Davids have the numbers but Christian and Gabby are at the centre of having so many bonds with Goliaths, and Nick has that tight bond with Mike which dates back several episodes. Oh, and Angelina will likely never align with Alison or Kara ever again.

The game has reset.

For the record, I love challenges which challenge willpower rather than how well you can balance on something or concentrate on a particular task.

The team rewards continue to be forgettable. A brand new challenge but it had such a small build that we will all forget about it by next week.