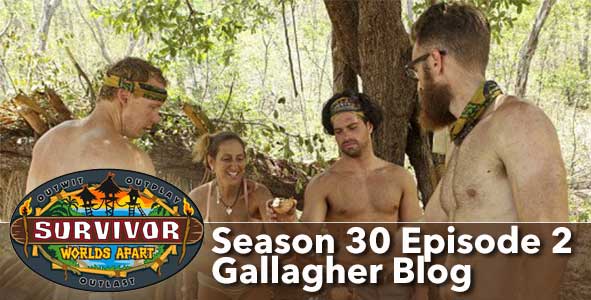 Last week, my consecutive streak of picking literally the worst possible person to win the game stayed alive for a staggering fifth season in a row. Picking Joaquin haunts me every night. I feel probably like how John McCain felt when he picked Sarah Palin to be his vice-presidential running mate.

Jeff: Do you believe in the Survivor blindside doctrine?

Joaquin: (quiver in his voice as he looks rattled) In what respect, Jeff?

Okay, so what do I do now? The White Collars last week decided to keep the lady with two left feet as opposed to the woman who was their best competitive female player. They went with loyalty over winning competitions, which I guess you really can’t blame them, but it could mean losing every competition until the merge and that could start tonight and lead to the extinguished torch of Joaquin.

Let’s pretend that Joaquin is our surrogate Survivor player, like we have full control of his moves on the island. What would we do to ensure he survives to the merge at least? The most obvious short term answer is somehow will the White Collars to victory in every damn immunity challenge. He has to somehow convince Tyler and Max that he isn’t a douche, for one, and convince them that they don’t want to be aligned with two deadweight women…Oh wait, they probably do want to be aligned with two deadweight women…(Is that sexist?… It sounds sexist….It’s probably sexist. I should stop).

Maybe, he can hand them copies of the book Band of Brothers and hope that they both take it to heart and want to start an “Easy Company” all-men alliance? I think he has to change the dynamics of his tribe and he needs to change them fast because he is a marked man heading into tonight.

The only other thing I’m excited for is seeing Charles Manson-Fabio-Vince. He’s some makeup and a pair of way too tight spandex that defines his scrotum away from looking like David Bowie in Labyrinth.

Jeff reminds us that there is a death clock on Joe from the hands of Vince if Joe continues to talk to Jenn…..

We start tonight with the Blue Collars as they are enjoying some crab. Dan reveals that he lost his thong in the water. On behalf of everybody, “Thank you Survivor gods”.

Lindsey tells us what we all already knew, mainly everybody on the Blue Collars are sick of him and the sad part is that he seems to know it. He’s also very dramatic so I bet my life that he recreates this John Candy speech at some point this season:

Can somebody explain to me the whole Jim Parsons thing? He’s the “funny” guy that wins an Emmy for his character on Big Bang Theory? I really don’t get it. Big Bang Theory is the last of sitcoms for good, right? I know I’ve beaten this topic to death, but every week I see a commercial for a sitcom during Survivor I have a violent reaction. I mean when did Blossom return to TV?

Is her friend “Six” making a comeback too? How about Joey….excuse me, I mean Joseph Lawrence? I think I can speak for anybody when I say we need more of this in our lives:

We join the White Collars as they start a fire for the first time on day four. Max gives a shout-out to Richard Hatch as he strips down to his birthday suit and casually walks around the beach. Gotta be honest, call me old fashioned, but talking to somebody while they’re stark naked would be tough in the middle of a game like Survivor.

Shirin decides to join the naked party. Tyler and Joaquin watch naked Shirin tripping on the rocks on the beach, which isn’t a good look for her.

We join the No Collars as Hali is seen and heard from for the first time this season. She is trying to bond with Nina.

Jenn makes a “snarky” remark about Nina. Vince comments that he’s not happy with that sort of vibe on his tribe. So to recap: Snarky=No Good. Stalking/uncomfortably controlling=Good.

Nina feels excluded by the other women. She confronts the girls back at camp. Jenn doesn’t have any compassion. Will comes to comfort Nina, but it’s clear she might have taken the target off of Vince….Truth be told, she does seem a little bit sensitive here.

Whoa, is this 90’s TV comeback night on CBS? James Van Der Beek is joining Patricia Arquette on CSI: Physician-assisted Career Suicide? How can somebody who produced the greatest moment in the history of acting be reduced to second lead on a crime procedural show?

Back from commercial and we join the Blues. Mike is tired of the sloth from his other tribemates at camp. Maybe he should just eat a scorpion again and chill out. He’s disgusted at the cool basketball game his other tribemates built. Maybe Mike is so competitive that he sees Dan being the clear first target and wants to make sure his own name gets thrown into the hat as well? That’s the only plausible explanation.

Back with the No Collars, as Vince and Nina hunt successfully for crab. Vince immediately tells Nina that he’s sick of Joe’s all-American rap. He then takes that passion and confronts Joe. He lets the kid know that he wants credit too, and he doesn’t want to be ignored. We are very close to Vince turning into the Talented Mr. Ripley and killing Joe on a canoe.

Vince and Nina then solidify an alliance, which could be pound-for-pound one of the crazier alliances ever formed. It’s always good to have an alliance of two when both members are the two most overly sensitive players in the game. This should be fun.

Commercial: If you’re a parent and you ever wondered what people with no kids think about your kid Facebook posts, here is some helpful feedback:

We go to the immunity challenge. Everybody is instructed to look shocked as Jeff announces that So was voted out at the last Tribal Council. Mike from the Blue Collar tribe wins the award this week for the best acting “shocked” award.

I think it’s awesome that Tim Burton decided to design the immunity trophy this year. I mean it looks like a real prop from The Nightmare Before Christmas.

The competition tonight involves swimming, grabbing balls with rope tied to them, then getting everybody across and shooting the balls into a basket.

The No Collars are going to Tribal tonight and it looks like anything can happen.

Commercial: Seeing another preview for the Matthew Perry driven Odd Couple show has me thinking: what is the current Friends power-ranking as of right now? At the height of the show it was probably:

Keep in mind, I don’t know how Jennifer Aniston is still in movies, but she is, so I guess she has to be number one right now, but it’s definitely not a hard 1. I think the rankings look like this now:

Am I crazy thinking David Schwimmer was going to have a big career post-Friends? Then again, I did pick Joaquin to win Survivor this season, so maybe I just suck at picking anything.

Back from commercial and we join a reeling No Collar team. Vince…brace yourself because this is going to sound shocking… wants to target Joe….I know. I know. I didn’t believe it until I heard it come out of his mouth myself.

Joe and Jenn want to target Nina and Vince. Joe wants to keep the tribe strong and vote out Nina, but he wants to split the vote already…because Nina apparently has an idol??

Will apparently is the swing vote. He is not on board with voting out Nina. He tells Vince, who actually says some smart things, that voting out Joe is bad for the tribe right now and it looks like Jenn is going.

Now Nina is blowing this plan, as she tells Will that Vince is concerned about his health. Will is now pissed and rethinking his plan. What is Nina doing? I mean, wow.

Vince calls himself the “glue” in the tribe. I wish I had a joke here.

Are Joe, Jenn and Hali really going to split the vote? That would have to be one of the stupidest instances of splitting the votes in recent history, right?

We go to the votes. It’s looking like Jenn will be going.

So it looks like Nina may have seriously altered the destiny of this game as her talk with Will swung the votes against Vince. If she doesn’t have the heart-to-heart with Will, then can we say that Will would have stuck to the plan and Jenn would have been voted out? Think about how different the game would look moving forward with Vince in a semi-power position. If I were Will, I would have stuck with Vince and Nina and voted out Jenn because both Vince and Nina are a little crazy and would have continued to stick out as targets and he could have just hidden in the weeds. Maybe I will be proven wrong, but I think Will took out somebody that he could have used as a shield for at least a few episodes.

The Blue Collars seem to be the team with the most negative energy on it. I get the feeling that their Tribal Council, if they ever have to go, would turn really ugly. It’s tough to say who the leader of that tribe is. Is it Rodney and the mean girls? We know it’s not Dan and it looks like Mike is basically asking to get voted out. I think Mike is going to be the first to go.

The White Collars rallied this week after a dismal display last week. I wonder if a couple of days away from Tribal is enough time for Joaquin to rehabilitate his image and get something going there. It still looks like Tyler and Max are the two biggest social threats this season. Granted this season is still in its infancy.

There are so many strong personalities this season. It should make for a very interesting season. It’s been very enjoyable so far. Thanks for reading! #TeamJoaquin.

worlds apart, it will be my revenge, Survivor, Rob Has a Website Blogger Archive, episode 2, survivor 30, survivor 2015