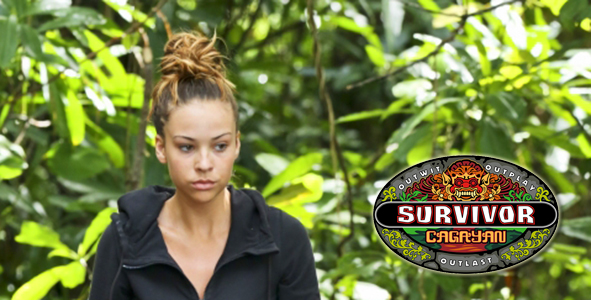 Confessional of the night: “In my opinion Spencer had some pretty good arguments. I would not want to sit next to Tony. I think he’s too charming and everybody likes him. Morgan is annoying and she’s a bitch, but she’s going to stay that way, so she’s not really a threat. You know, she’s just extra luggage we’re carrying around here.” – Kass

Another truth and another mistake by Kass. She’s like a quarterback that reads the defense correctly, but lacks the necessary skills to even receive the snap. Which makes her a pretty sh*tty quarterback, ahem, Survivor player.

Ever since Survivor decided to take out the intro, people (a loud minority?) have made a stink about it. It was and still is a brilliant move. More content, the better.

PS – I also loved the on-screen name annotations from One World, but we haven’t seen those again. Maybe they can make a comeback for season 29.

Anyway, this is in direct response to those making their usual stink: Screw the intro!

Time for “10 sentences or less” WITH finisher predictions. These aren’t power rankings. The players are in the exact order of how I think they will place and they’ll change from week to week as I see fit. Lets go! 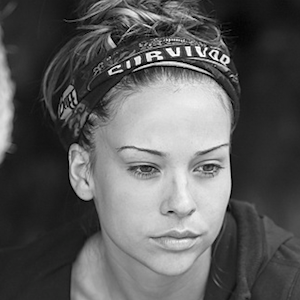 When Kass said Morgan was like a 14-year-old dog, was that Kass’s way of saying Morgan was behaving like a teenage bitch? Kass is witty, but she’s not that witty. I am though. Jeez, you might love yourself more than Morgan loves herself.

Haven’t you heard? Loving yourself is the first step to loving someone else. I knew you would say that.

Morgan may not be my type of human, but gosh darnit, do I respect her willingness to give unfiltered and mostly accurate opinions. If she could replace her mean-spiritedness with a sense of humor, she’d be all types of wonderful. So basically if she was a different person? Basically.

Do you think we’ll see her again? I think we’ll definitely see her again. Imagine her and Angelia Layton on the same season? Imagining! Survivor: Top Heavy. You know, because of the strategy.

You heard the man. He loves action!

Which makes sense considering he’s a police officer in Jersey City. It’s highly unlikely directing traffic when school gets out is in his job description. Cops actually do that somewhere? Uh, yeah. White people don’t want the eyesore of a traffic light in the middle of their town. That’s racist. Sure is! By the way, Uncle Cliffy lives in one of those towns. No wonder he and Tony didn’t get along. Tony’s jealous of rich town cops. The man loves action! He would get bored.

I feel like we’re on borrowed time with Tony considering I thought his game should have ended a couple episodes ago. And it would have happened if the estrogenic Kass and Sarah stayed out of the way. You and Spencer’s comment disgust me. Wait! Why are you disgusted with me, but only disgusted with Spencer’s COMMENT? Because. Okie dokie.

There are a bunch of things I don’t agree with when it comes to Survivor. One of those things is when a person makes an argument that someone doesn’t deserve to be there. If it’s gameplay, fine. But if you truly believe that, you’re asinine. Do you think Tony believed Morgan didn’t deserve to be there? Unfortunately, yes. Most people who say that type of crap, believe it. Nettled Nick is back! Go away.

So why do you think Tony goes next? Because of the previews? They always lie! When Tony recklessly fiends for action this week, Jefra, Kass, LJ, Trish and Woo are going to select him for jury duty.

You didn’t fill anything out. I know. That’s messed up. I needed just the right amount of lines to match the height of her image.

I’m not buying what you’re selling anymore, Survivor! In fact, I’m returning everything you sold me. It’s snake oil. All of it! Why are you spazzing out? Calm down.

Speaking of which, can we get #SpazAttack going this week, CBS? How about #SpenceBeSpazzin‘ or #BrainSpasm?

This is a nice segue to temper tantrums. Spencer threw and kicked rocks. He moaned and groaned. He whined and— Shined! There will be no more shining for this small irregularly-shaped bit of sugar crystal, covered with a thin candy-coating.

I used Wikipedia for that joke. Congratulations, you know how to use the internet.

If I wanted to watch temper tantrums I’d hang out at a five-year-old’s birthday party. Or if you wanted to watch little children run around. WHOA. What? You can do every joke under the sun, but I can’t make a little crack about pedophilia? No, I mean, if I wanted to do that, I would become a pastor or something.

You know how cops always call for backup? Well, ninjas never call for backup. They go on solo missions. He left Kass with Spencer to go call for LJ, remember? Facts have no place in this column.

With a plaid red shirt and solid red shorts, Woo blended in with the green jungle. That’s right. WOO MANAGED TO BLEND RED AND GREEN. For those unfamiliar with the color wheel, red and green are contrasting colors. If that isn’t the definition of #NinjaStealthMode, I don’t know what is.

Oh and f*ck chasing ninja boy. What’s the point? I mean, lets pretend you catch up to him. What are you going to do? Tackle him? Judo chop the martial arts instructor? Austin Powers reference! Elizabeth Hurley is gorgeous. I concur.

Even though Woo didn’t find the Idol, I feel like that entire scene painted him in great light. Maybe it’s wishful thinking on my part, but I’d rather laugh with Woo than cringe with Spencer.

PS – The ninja sound effects have been a nice touch, Survivor.

Stick a fork in you? Why I would love to…

A few reasons why Jeremiah was casted:

Casted isn’t a word. It’s cast. Take note dummies. Casted is not a word. You’re calling yourself a dummy? I’m trying to educate through humor.

1. Strategical – You mean strategic. It’s a word. Ask Tony or look it up. Wow, you travelled back in time for that joke. Square One ain’t afraid of a little time travel. Nice, you’re pretending to be an uneducated southerner. Stereotype much? You set me up again! Yes, that’s exactly what happened. I set you up to be prejudice.

2. Humorous – Wait, why is Jeremiah strategical!? Isn’t it obvious? He’s made it this far. He has to be doing something right!

3. Interesting – Wait, why is Jeremiah humorous!? See, this is what happens when you rudely interrupt. We have to play catch up. Didn’t you see him laughing at the Outback Steakhouse reward? He told a joke! And he’s interesting because I’m always left wanting more. Oh, you’re being sarcastic.

All kidding aside, how can someone be mad with Jeremiah and his performance? No kidding aside, Julia Landauer probably wants her vanilla-ness back. BOOM. How’s that for time travel, assh*le!? You’re an idiot. Caramoan was two seasons ago. Big whoop.

Jefra’s image says it all. We see her make cute faces and hear her say cute things. Aw, she’s such a cutie-pie. BARF! You’re just mad because you’ve never been and never will be as cute as her. Trying to impress Morgan all of a sudden? Na, she ain’t my type. Is Jefra? It’s closer. Wait, why am I telling you my type? Who cares? Well, why isn’t she your type?

Be serious! I am. Oh and I’m also as smooth as Filipino silk. Is Filipino silk smoother than other silks? How the hell should I know? Kill yourself. YOU definitely don’t deserve her!

1) As we’re all aware, Kass lacks charisma. For me to appreciate your bullsh*tting skills, you need to wield charm like Morgan wields her good looks.

2) This is more Survivor related, but she lacks the ability to be honest in her confessionals. Whether it’s a conscious act or not, I can’t stand when players are dishonest in their confessionals. Phillip Sheppard is a prime example of this.

She has no clue what she’s doing. Absolutely none. Or she does and you just don’t understand her strategy. Like she said, she’s playing to get to Final Tribal Council. I think this makes sense to Kass because she’s so confident in her courtroom skills, she thinks she can sway any jury. Unfortunately for her, this isn’t the courtroom.

Much like Phillip Sheppard’s, her act is getting old. I only have so much tolerance for delusion. But it’s the ambush strategy! Yawn.

Actually, I take everything back. Delusion is exactly what we’re watching. Kass and Phillip Sheppard aren’t bullsh*tters. They’re delusional.

You saw it. I saw it. We all saw it. LJ was smiling! When Kass and Morgan were arguing over whose time of the month it was, I mean, whose time it was to get water, LJ was quietly cheering in the background. Of course! OF COURSE YOU ATTRIBUTE WOMEN NOT GETTING ALONG TO BEING ABOUT THEIR MENSTRUAL CYCLES.

Hey, I heard they’re super annoying and can sometimes impact behavior. Oh yeah? Is that what you heard? Well, yes and I’ve also witnessed it firsthand. That’s it! I’m done. What did I say? I’m being honest!

Whatever. Why do you think LJ comes in second? I don’t want him to win. That’s why. I need winners to be charismatic. You and this charisma nonsense. You probably think you’re the most charming person in the world. Maybe not the world, but— Uh huh— Would you rather I lie? No, continue.

I’ll continue with LJ. Even though we haven’t received much entertainment from him, his story doesn’t seem like it’s ending anytime soon. Here’s to hoping LJ delivers some laughs during the later stages of the game. You’re going to need a genie or some pretty powerful candles for that to happen. A boy can dream, can’t he?

TRISH IS ON TOP! Don’t you mean Mrs. Robinson? Yes, as a matter of fact, I do.

Did Trish even say anything last episode? Not really. Yet you have her winning. You’re more of a roller coaster than J’Tia.

After realizing Tony’s days are numbered, I have no one else to root for. You weren’t a fan of hers in the beginning! That was eons ago.

If she can make it to Final Tribal Council with Kass and LJ, this is how I see the votes going down:

God, I’m f*cking reaching with this one. Uh, you think?