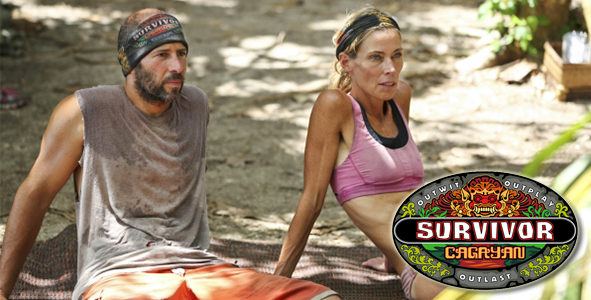 Confessional of the night: “So I was questioning Tony’s integrity and he admitted the double agents isn’t going to work. And Jefra needed to hear that I was calling him out. And that’s why I did what I did. But I think she’s pretty loyal. I don’t think she’ll flip.” – Trish

The reason this is the confessional of the night is because Trish proved once again how socially savvy she is. She knows exactly what people want and need to hear. That kind of quality is something few possess.

This leads me to the most important skill needed to win Survivor that’s capable of being acquired through practice. Most people would suggest acquiring physical skills such as fire making, fishing, eye-hand coordination, swimming and endurance.

While I believe all these skills are beneficial, they’re nowhere near the most important skill that can be acquired through practice.

The most important skill is: Listening.

Be a listener. That’s it. Notice I didn’t specify that you need to be a “good” listener. Meaning, you don’t have to retain information. Reason being is most people don’t even know how to pretend to listen, let alone listen well. Which means all you have to do is APPEAR like you’re listening and people will be eating out of your hands.

Jeremiah may be country, but now he’s a wrap. How long did it take you to come up with that? Not long, but like you give a crap.

Jeremiah’s the model of Survivor cattle. He’s the one who headbutted Jefra with a paddle. That doesn’t make sense. Maybe he was telling us his head is dense.

Is it surprising his chances were never more than grave? Heck, he’s never been in a cave. But you know what, he’s been under a rock because his game was always on the clock. Tick-tock, tick-tock.

Are you rhyming? Yeah, how’s my timing? You’re a douche. You better let loose or you’re going to choke on your own noose.

Then you’ll be as dead as your sense of humor because you won’t find it funny when I say Jeremiah was a tumor. But before you go, did you hear the rumor?

When Tasha is voted out, will she publicly account for her actions? Is that a CPA joke? Sure is!

Do you know what time it is? Time for you to b*tch about Tasha? Ding, ding, ding! But lets call her the Immunity Queen so I can feel a little better about myself for unnecessarily picking on her.

This isn’t an Immunity Queen specific complaint, but— They’ve never been specific to her! You just use her as a scapegoat for your rants. In Survivor, there are roles. This is her role in my column. Let it be.

I despise contestant reactions when Jeff reveals the rewards to Reward Challenges. I can’t stand them. “OH MY GOSH! YAY! THIS IS DEFINITELY WORTH PLAYING FOR!”

Oh, f*cking shoot me. Then we’ll both be dead.

Give me sarcasm! Give me nonchalance! Give me deadpan! Give me anything but joy. PLEASE, NO MORE SMILING. Act like a momentary barbecue feast isn’t sh*t compared to a million dollars. Are you kidding me? They’re famished. Cut them some slack, Mr. Perfect. No, it has to stop! I can’t take the monotony anymore.

Dare to be different, Immunity Queen!

PS – See what I did there? I ended her section with the complimentary nickname I’ve been reinforcing since the beginning to appear more Tasha friendly up to the very last second. But you still singled her out at the end.

Lets try this again, shall we!?

I even looked up a spell to give us a little more reinforcement. Who’s us? I like Spencer!

Did you not hear me? I said I looked up a spell. Yeah, so what? Uh, okay, never mind.

That was the best you could come up with? I’m not a witch. Plus, the site was starting to freak me out. Aw, baby Nicky is afraid of a little hocus-pocus. I’ll be all smiles when Spencer winds up at Ponderosa due to Tony’s bag of tricks.

By the way, I’m 99% sure we’ve been fed a certain Spencer. 99%, huh? Confidence, with a touch of humility, is everything! 1% humility? That sounds about right. The real Spencer is a younger version of Matt Quinlan from One World.

Did you see him make fun of our boy Woo? Oh yeah, he did some sh*tty California dude impersonation. Will the real Slim Spencer please stand up? Reference! He did.

And quit trying to take over my reference game. I’ll one up you. That sounds familiar. Survivor, stop trying to make Spencer happen. It’s not going to happen. Golly, I love Rachel McAdams.

Um, hello!? He has the #SpecialIdol!

Do you really think it’ll be THAT easy to make the top four? You’re in denial. His “Top Five” comment still has meaning to me.

This is what I think happens:

When there are six people left, the plan will be to vote out Tony with a 5-to-1 vote. He’ll play his Idol after the votes are read and use his one vote to vote out Spencer. The following week, he’ll be voted out 4-to-1 and finish 5th.

Why are we getting all serious? This is the fun zone.

Can we talk about how alpha males always get bailed out? Tony found the Idol fair and square. I bet the cameraman pointed him in the right direction though. They’re part of the game! Take your tin foil hat and the thing it’s covering and put it in the microwave. Says the alpha male. Stop it. Tony felt so dirty after finding it that the first thing on his mind was washing up!

Can you just be happy someone like Spencer didn’t find it? Ugh, fine. I still think it’s dumb. I doubt we’ll see it again.

The entire papaya scene was pure entertainment. From Woo’s retelling of what happened to Trish’s reaction, I couldn’t stop laughing.

And who can blame him for being overly excited? Everyone wants to get their hands on Morgan’s boobs. Badum tish.

I think Woo is safe for a while considering his position within the majority alliance. While this game can change course at a moment’s notice, the main targets of late have been Spencer, Tasha and Tony. Then next in line would sadly have to be Woo. For the most part I agree, but I’m hoping he can find a way to win!

Speaking of which and along the same lines of last week, I want to ask the ladies of RHAP if you find Woo’s personality attractive.

If so, is it a temporary attraction or could you see yourself in a relationship him? Or maybe you find him attractive mainly for his great smile and physical appearance?

My guess is most women will say his positive personality has the potential to get annoying after a while. And like last week, you’ll probably be proven wrong!

I’ll let you in on a little secret. I don’t write each player’s section in order of how I rank their finishes. I’m all over the place and go with whatever comes to me. That’s your secret? Boring!

I thought I was finished with the column so I got up to make some food. As soon as I made it to the refrigerator I said aloud, “Wait, do I still have Kass’s section? F*CK!”

This makes me wonder if the players are forgetting about Kass, as well. How can anyone forget about Tactless Kass!? What I mean is, are they forgetting what she’s capable of?

Kass seems to have ingratiated herself with her new alliance. But that doesn’t mean she won’t turn on a dime. Heck, this past episode she reiterated how she’s not offended by people making moves to further their own games. This is an incredibly admirable and calculating statement because it displays how aware she is of Survivor’s core nature.

I think Kass has one more ill-advised and disruptive move in her. There’s no way she remains quiet. She NEEDS the wheel in her hands.

The J & J Double Elimination Jamboree I conceived wasn’t achieved. If it was I would have felt like a thieve with tricks up his sleeve. I can still be relieved because I received one country person to leave. But please don’t perceive I believe the entire south to be naive.

You’re rhyming again. That I am, my friend. Get the firing squad. But they’re two peas in a pod and Jefra believes Tony’s God. Or Jesus, I forget which. Maybe it’s Evil Genius. And not to be facetious or incredibly grievous, but we’re dealing with a fetus.

Tony committed treason, but everything happens for a reason. That isn’t true this season or any other, please son. Bottom line, it isn’t true, so I’ll paint the picture that she refused to drew. I mean draw. Hem haw. Out comes the chainsaw.

How would she explain murder, rape and gay hate? Everything happens for a reason doesn’t skate. Oh and there’s no such thing as fate so drop the religious mental weight. We might as well put it all on the plate if we’re going to debate the escapes we build to avoid the responsibility of our achievements and mistakes.

Before I go I should restate, even though it’s a little late, Jefra isn’t the head of a snake. She’s a good person, if not great.

Wow, you’re such a loser. I’m here to amuse ya!

Trish is back to the number one spot, baby!

Lets piece together where she stands within her alliance. Tony trusts her and won’t vote her out anytime soon. She’s like a mother figure to Jefra, so there’s no way Jefra turns on her. What about Ciera last season!? You’re annoying.

Trish manipulated Kass to flip which means there’s a level of trust and comfort between the two. And Woo is Woo. How eloquent of you.

You know what was interesting about the limes and papayas thing? Trish put the kibosh on the strategy talk. Jefra, Kass, Woo AND Tony all listened to her! Well, it led to Tony having to strategize by himself and finding the Idol.

She’ll have the most options in a final five that includes Jefra, Kass, Tony and Woo. The only way she gets voted out is if Kass, Tony and Woo come together. That actually sounds plausible. Darnit. It’ll come down to whether or not Tony is evil enough to trade Trish for Kass. And I don’t think Tony has that in him.

PS – Do we think Trish wanted to rub Woo’s butt? I know I did!