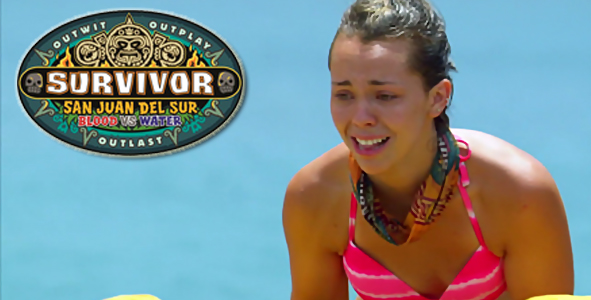 Welcome back, all you Survivors you ;).

I’m actually trying to stay distracted as I’m typing all this. I know probably none of you will care, but I’m a really big baseball fan and my beloved San Francisco Giants are playing in a one game playoff: win and you continue on through the playoffs; lose and your season is over. The pressure is too much for me and I can’t even watch. I’m so superstitious that I went on the exact same jogging route that I went on the last time the Giants faced elimination, which was the last time they were in the playoffs in 2012. It worked then as they went on to win the World Series.

I can’t take the pressure. I would imagine playing Survivor would feel just like I feel now, incredibly paranoid and stressful..one false move and it can be over. One poorly timed joke and maybe you get eliminated at Tribal Council. I’ve often thought about how I would do when Rob pulls some strings and gets me on Survivor. I’d like to think I would play it smooth and calculating like Boston Rob and coast to the finals like he did the last time he played the game, but the reality is that I probably would play like some vile combination of Tweek from South Park (1:38 mark)

Maybe between now and when I get to play the game I will suck it up and develop the Han Solo-esque style I know I was born to play with ;). With that said, let’s keep a running diary of tonight’s action. We will set the over-under on people who end up crying tonight at two and a half. Let’s go as it’s 8 pm Portland, Oregon time:

Previously on Survivor, this writer is an idiot because he thought it was going to be like the last Blood vs Water season and Nadiya would compete against somebody at the gladiator coliseum again.

Black-and-white Survivor begins again this season with Josh trying to do damage control with Baylor after he voted with the guys. Somehow, he tries to spin it that it actually makes him more trustworthy to her. Baylor looks at him with a very mortified look on her face.

Things are casual on the blue tribe as the guys are showing off their flexibility and other important calisthenics. Jeremy looks up and thanks god that he’s on this tribe, smelling the final four already.

Jon takes accountability for losing the flint and thinks by doing so it will help his game. Everybody on the blue tribe glares at him in annoyance.

First commercial…I’m still waiting on the Giants game…I’m still  scared to look at updates…I think I’m going to have a nervous breakdown. Maybe a preview for Tom Cruise’s The Edge of Tomorrow coming out on DVD will help….nope. Remember when Tom Cruise movies were like the biggest thing ever? I know this is a foolish question, but did Tom Cruise really make a bad movie between 1986-1998? Seriously, without looking at IMDB, does one bomb come to mind? I can’t think of one. I mean, obviously he was really douchy in Interview with a Vampire and Days of Thunder but both of those made a shitload of money I think. I miss those days…I feel like there should be a Tom Cruise channel or something…I mean there are already 500 channels literally; it would have to be better than at least thirty percent of those now…

Back from commercial and we’re greeted with the layout for the reward challenge.

Natalie sees that her sister is gone and her tribe half-heartedly tries to console her. We also get our first cry of the evening, only two more needed to win the bet.

After a weak rock/paper/scissors comp to decide who gets to play Survivor skee-ball, John Rocker and his soulmate Julie start us off.

Julie looks like she’s performing life-threatening brain surgery, but it works as she moves through the first part of the comp as John lacks the finesse this comp requires.

Julie pulls the upset and John gets sent to Exile Island. John makes a sexist comment: “ I lost to a girl.”…I would have said the same thing  I can’t believe this meathead said that.

Julie decides to send Jeremy with John to Exile. I think we have the set-up for our next buddy cop movie, The Firefighter and The Brave…Get it?… Because John Rocker played for the Atlanta Braves…Forget it….

Before leaving, the blue team asks a horrified Jeff a question, if they can they trade their beans for some more flint. Jeff  f**ks with them for about two minutes before countering their offer with offering flint for all their fishing gear. They argue but go with getting the re-up of flint. Is this a Survivor first? Probst looks beyond annoyed with everybody as he dismisses them.

Hey, the Giants won. Yay! I def will have a pep in my step for the rest of this running diary as everybody reading this is desperately waiting for someone else’s column to post…Sorry, you’ll have to wait until Saturday.

The McCarthys coming to CBS in October…yuck. Did anyone else see this preview and think “Wow, I think I will check that out”?

Back from commercial  and we get another cry!! That’s two, right? Natalie again is putting this crying bet on her back. She gets comforted by the other girls on the blue tribe as they are probably secretly plotting against her.

The orange team discover who John Rocker really is and have a talk about him.  Josh shares that he  is already pissing off people in this game, but we haven’t seen that yet, so I guess it’s safe to assume that it’s true…

We cut to Exile Island with Jeremy as he too knows who John Rocker is and doesn’t seem too excited to be sharing the honeymoon suite at Exile with him. Unlike his wife, Jeremy decides to share the clue, although I don’t think he had much of a choice as far as thinking about that choice as John was literally looking over his shoulder. They both make an uneasy agreement to “watch over” each other’s significant other. John Rocker carries himself as if he could have been one of the members of DiCaprio’s crew in Django Unchained…lazy joke, I know…

Commercial…I love this time of the year. It’s like one negative political ad after another. I think I would be a great writer for one of those.

Rob Cesternino doesn’t believe in The Holocaust. Rob Cesternino voted against making sex offenders live far away from schools. Is Rob Cesternino the kind of leader that we want in Congress? Paid for by the committee to get Scott Gallagher elected.

Back from commercial and it’s time for the immunity challenge. John and Jeremy rejoin their groups. We never see the sleeping digs for Exile Island. I would like to know what that looks like. Did they sleep head-to-toe? Did they cuddle? Did they awkwardly sleep twenty feet apart? Can we please see this in the future?

We get an American Gladiators-style competition tonight, basically two people ramming into each other with full force using some ramming, colorful thingy.

Drew and Alex square off and I can’t tell them apart other than the color of their rams. I guess the older Menendez brother took down the younger Menendez this time.

Natalie and Val square off with Val turning into a human boulder, but it’s not looking like it’s working for her and she gets rolled off by Natalie..kind of an upset there, I think.

John vs Jon…Wow! This is what a caveman fight had to look like back during the Dawn of Man. Jon pulls it out, but that was borderline scary how intense it was.

Missy and Baylor square off and two seconds in, Baylor gets a bloody lip and they stop as Baylor starts crying…I just won the bet!!! Why is she crying? Baylor annihilates her mother and then slams down her ram in a petulant way…or in a roid-rage way…take your choice there.

Reed and Josh square off with Reed taking Josh out as he gives a wave to the crowd after his victory…very classy.

In the battle of artificial hips, Keith and Dale got to war. Dale wins this battle.

In the final round we get Jackie and Kelly. Jeff before the action questions Dale who also looks like he’s about to cry…Enough with the crying…At least save it for the “surprise” family visit in week 8. Kelly goes on to win and secures immunity for her tribe.

Jeff sends the two tribes off…Val sends us to commercial saying that she is ready to “make big moves”…Is Rocker in trouble? It sure seems like it.

Anybody can be stalker…anybody can be a victim….Stalker… watch it tonight; talk about it tomorrow. What are the real odds that anybody is going to be talking about Stalker tomorrow? When does Breaking Bad‘s new season start? Okay, well how about if we all do a Kickstarter and make the Lost creators redo season six? There aren’t people who still lie and pretend that season six was good, right?

Back from commercial and the orange team looks deflated.

John starts hunting for the idol. Somehow he drags a stick over some dirt and finds the idol. Do we believe he’s going to be smart about this?…I guess we will see.

Tribal Council begins with processing the immunity loss challenge. Josh makes a Broadway show analogy that has Wes thoroughly confused… like Josh is speaking Latin or something.

Val promptly throws Baylor under the bus. Val is pretty ruthless. You’ve got to hand it to her. She is playing a great poker hand with shit cards but nobody wants to call her bluff.

We go to the votes. We get a tie! For some inexplicable reason, John still thinks Val has an idol.

That is it…Val is out. Let’s be honest… Val got a little too cute with her game play…Maybe she overplayed just a tad. Val was like Eddie Murphy’s friend Mike, at the start of Beverly Hills Cop, who messes with the wrong people and gets himself killed fifteen minutes into the movie. I thought Val was going to be better this season. I mean her Meet the Cast video looked great, but she came into the game way cockier than she should have been. I thought she was going to be a force this season, but honestly game-wise, I think she got what she deserved. The Survivor gods humbled her.

So with Val getting the ax this episode that makes it two girls in a row gone this season. I think Val’s leaving actually will help Jeremy. Now if he is around come merge-time, he will be seen as less of a target because his wife is gone. I think Jeremy has the potential to use this incident as the catalyst that propels him into a top five spot this season. Before we get to our power rankings, I think it’s tough not to comment on John Rocker. He finds an idol, which is great, but then two seconds later he’s believing Val’s clear lie…If he believed such an obvious lie, how is he going to really read people later on in the game when/if the lies get way more intense and important? Does anybody here not think that John is going to implode in epic fashion? It seems like he has blindside written on his forehead..even with an idol.

Power rankings for this week:

Thanks for reading! GO GIANTS!