Jefra deserved to be voted out because she’s a dumb ass. I don’t understand why anyone would root for a moron like Jefra.

Woo’s surfer dude act shows how stupid he is. Woo’s an idiot and anyone who likes him is an idiot.

Spencer is a douche and he should die. I don’t know what it is about Spencer’s face, but I just want to punch him.

Tony is a terrible person for being a cop that lies like a criminal. I don’t hate anyone in the entire world more than Tony.

Kass is a bitch and needs to be put in her place. Every time I watch Survivor, I hate Kass more and more.

Tasha’s a brat that needs to be shot. Tasha sucks at life.

Trish needs to get her teeth knocked out so she can get new ones. Trish is the most despicable human being I’ve ever seen.

While I understand you love Survivor, there’s no reason to be so angry. Actually, there is a reason, but it’s unlikely to be admirable. In an attempt to discuss this topic, we should try to understand a few things:

Although I’ve directed the beginning of this column towards the loud minority, it’s the quiet majority I seek. The quiet, positive majority has the ability to drown out the loud, hateful minority and I’d love to see that happen one day.

Time for “10 sentences or less” WITH finisher predictions. Let’s go! 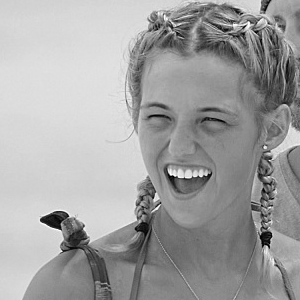 If kept in a box, the heart of your game stops.[/caption]

But I can give you perfection with a lyrical session. All I need is a second for you to consider this a present. So let me beckon more rhymes for you to step in.

I reckon it’d be poor reflection to consider this heaven because Jefra came in seven. I mean seventh or voted out eleventh. As Tony did a check-in, the crab was dead and that should be a lesson. Can you make the connection?

Let me know when and we can be friends. I’ll put away the weapons so we can avoid armageddon. Or grab a red pen and I’ll spell out the essence of her adolescence. You know that won’t be pleasant, but then again I’m not looking to win an election.

Because she’s holy, she prayed for guacamole. If she received ravioli or stromboli would prayer be baloney? It has to be lonely as the goalie for the phony. But first we should ask lowly, but wealthy Joel Osteen.

22 years is three from nineteen. That means I can count to umpteen the things I’ve seen that represent green. Sharing her feelings was like jumping on a trampoline into a leaky submarine. She’ll become more keen, but won’t become a lying machine.

This is fine for the non-obscene and non-mean. Although I glean to win Survivor there’s no in between. The opposite of the spleen, this is vital to be King or Queen. You need the sociopath gene.

You are the devil. How could you tell? ‘Cause this is hell. Toodle-loo to the southern belle.

It all started with Jefra’s winning bid for guacamole. As soon as Jefra was below him, Woo used a domineering voice and instructed her to “Get a fat dip of that guac.” And boy, did Jefra listen!

Then came the ribs. We all heard the adult movie music. We all heard Woo’s words. We all heard Jeff’s words. But did you hear Jefra’s words!? As Woo went to wash down the flavorful meat, Jefra giggled and said “Easy, Woo.” Sexual tension, anyone? Back off, Jefra. He’s mine.

But wait, there’s more! Trish wanted in on the action and exclaimed “Wow. Woo-hoo.” Then Kass flirtatiously quipped “Woo’s going to get woozy.” If anyone’s counting, we’re up to a fivesome at this point.

To top it all off, as Woo approached his seat, Spencer was surprised and stated “Oh my gosh, it looked smaller when it was up there.” Are you reading 50 Shades of Grey or something? All I’m saying is we got up to a sixsome or perhaps more aptly put, a ménage à trois deux fois.

Spencer’s going to win. Yeah, I can see that. My stubbornness prevails once again!

His dramatic flailing and emphatic confessionals are becoming too much for me to bear. What do you have against the Brains? I’m starting to think you’re jealous because you don’t have one!

You don’t know how sick Spencer makes me. He makes me f*ckin’ sick to my stomach. Every time I see him on screen I puke. Eminem reference!

You’re just jealous he’s manipulating your boy, Tony. The only manipulating going on is Spencer’s edit! Oh please, like every edit isn’t manipulated.

Back to how sick Spencer makes me in order to finish my joke. The three illnesses I’d rather have than watch Spencer play Survivor:

Wow, you’ve crossed the line for the millionth time. Do you know how many people are affected by cancer each year? You’re like a big red button. All I have to do is push.

Finally! Yeah, yeah, yeah. Tony makes the top four. Then he gets unanimously voted out. I don’t know. Tony might be the perfect person to take to the end.

If Kass and Trish KNEW Tony had a 0% chance of winning one million dollars, they still wouldn’t take him. Implied sexism!

Tony’s only chance to plead his case at Final Tribal Council is if he wins Immunity. On paper, that’s a 25% chance. So you think he screwed up this past episode?

Without a doubt. And it’s not because he made a bad move. It’s just not a move TONY can make. What’s that supposed to mean?

His only options this past episode were to either include Kass and Trish on the Jefra blindside or vote out Spencer. But that’s not who Tony is! Great point. Even if Tony did one of these two things, he would still find a way to screw it up for himself. Burn. I don’t mean that as a diss. I simply believe it’s factual.

For a dry sense of humor to come across well, it needs to be coupled with lightheartedness. Even if the content is harsh, it’s amazing what a person can get away with as long as they flash a simple smile. Unfortunately for Kass, she’s unaware of this reality. She’s unaware of all reality!

Equating the college-aged male to the most selfish beast on the planet IS funny, but Kass’s patronizing demeanor gets in the way of a potential laugh. It’s like an ice cream truck driving down your block that refuses to stop. I don’t follow.

Kass’s jokes are the ice cream and Kass is the driver. Everyone knows she has ice cream in there, but she insists on being a d*ck. I could really go for a Choco-Taco right about now. Or no, a Screw Ball. Actually, a Chipwich!

Listen up, chubby. Kass is about to make her next ill-advised move. Of course she is. She’s in need of a power trip. It’s going to be funny. And by funny, I mean laughable. The two people Kass has a chance against, albeit a minor one, in a Final Tribal Council scenario are Tony and Woo.

But what’s going to happen? She’ll desperately want to vote out Tony, but due to his Idols she’ll have to settle for his right-hand man, Woo. Then to top off her Hot Fudge No Chance Sundae, she’ll agree to send Tony home in fourth place.

Oh my gosh, all this ice cream talk! Tub of chub, now’s not the time to lose focus. Your girl Tasha is up next!

You think Tasha is going to come in second!?

Not necessarily. You see, I’ve been on a hot streak as of late. The last three people I’ve predicted to finish second have been voted out of the game. Ohhh, you’re being an assh*le again.

LJ, Jeremiah and most recently Jefra have been my victims. And now you want to add Tasha to your list. If I’m going to be a serial killer, I might as well go for the jugular.

If this is a success, my next target will be Spencer.

Would you, for once, please give Tasha some credit? Players who win Immunity when they need to shouldn’t automatically be given props. We keep hearing how great Tasha is socially, but if the target is continually on her then she’s obviously not doing something right. She’s doing everything she can! She’s winning challenges!

No, a player’s game shouldn’t solely be predicated on winning Immunity Challenges. When Tasha loses an Immunity Challenge and pushes the heat onto someone else I’ll be first in line to high five her. I doubt it. Yeah, I’m lying. But I wish her the best. I swear!

Trish almost got to touch Woo’s butt! All this Woo talk is going to make my pants wet.

The auctions have always fascinated me. I get that contestants are hungry. Seriously, I do. But just once, I’d like to see every contestant bid on the advantage. That will never happen. Not even in a Superfan season? Nope.

It has me wondering what type of player wins the advantage. Is it the aggressive type? The knowledgeable? The desperate? Is it the type that tends to win Survivor?

Either way, Trish’s candy, popcorn and soda would wind up being a nice touch if she takes the title. It would mean she was in the process of watching her own movie.