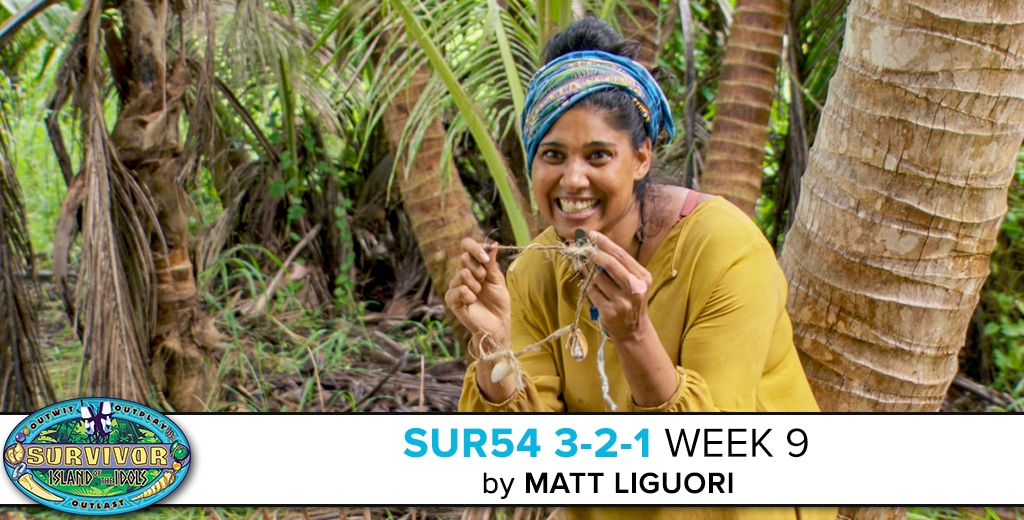 Survivor: Island of the Idols Week 9

So long to Missy and Aaron. Missy spent a lot of time this season in my top 3 and she played a hell of a game. Of course there was plenty of room for improvement, but Missy played hard and if not for this week’s twist I think both she and Aaron could’ve gone all the way.

Ran a little short on time this week so we’ll just get right into this week’s picks!

As the only player in the game currently holding an idol, Karishma was a lock for this week’s top 3. There’s been a lot of talk about “dragging Karishma to the end” because everybody sees her as a goat and while that doesn’t sound great… getting to the end is more than half the battle. If Karishma can use her newly found idol to make a big move and take Tommy or Lauren out, Karishma’s resume suddenly skyrockets in comparison to almost all the other players remaining.

Lauren pulled off the move she was going for this week and seemed to do so effortlessly. Taking Aaron out weakened the Lairo four (which as it turns out, Elaine was already working on herself) but also made it much more likely for everyone else to have a chance at winning immunity. The idea of a Goat Army forming probably hurts her, but I do imagine that they would come for Tommy before Lauren. Plus, Lauren seems to have a good rapport with Janet and having Janet/Dan in her corner would be huge.

Tommy didn’t do much this week, but he’s still the front-runner to win this game in my eyes. Missy coming after him shook him up a bit, but luckily for him Missy’s relationships with Karishma and Elaine were not as strong as they might’ve seemed. Tommy and Lauren will be back together by the next vote and the game is now wide open. A downside for Tommy would be that Karishma acknowledged his threat level (despite not voting him out). But with Lauren, Janet, Dan, and Dean (loosely) on his side, Tommy doesn’t seem to have much to worry about.

Dean was right to be worried about Aaron going home. This season has been all about taking out big threats as soon as possible. With two of the biggest challenge threats (Aaron and Missy) now gone, attention could easily shift over to Dean. Dean may still be in good with Tommy and Lauren, but if that was just for the first few votes and that duo isn’t too attached to him I’m not sure where else he has to turn. Either way, it’s time for Dean to take the game into his own hands and get something going.

Just when things were starting to look bad… they got worse. The elements are wearing her down, her once-#1 ally Elaine blindsided her and voted out Missy, and she’s still a physical threat that everyone will want to take out sooner or later. The clock is ticking. As I mentioned last week I haven’t been high on Elizabeth’s game, so now to see that her two closest allies were swept off the board in one night I feel good about hanging a Done chain here.

Janet has landed in every possible spot on this blog in the past 3 weeks. As the latest one-to-watch, Janet might’ve found new life in the game. Aaron and Missy going home in one night couldn’t possibly have been better for her game. She’s surrounded by some original Vokai, plenty of fellow underdogs, and a few physical threats that will hopefully stand out more and more as numbers continue to dwindle. We’re all universally rooting for Janet and I really hope she can keep sliding through.