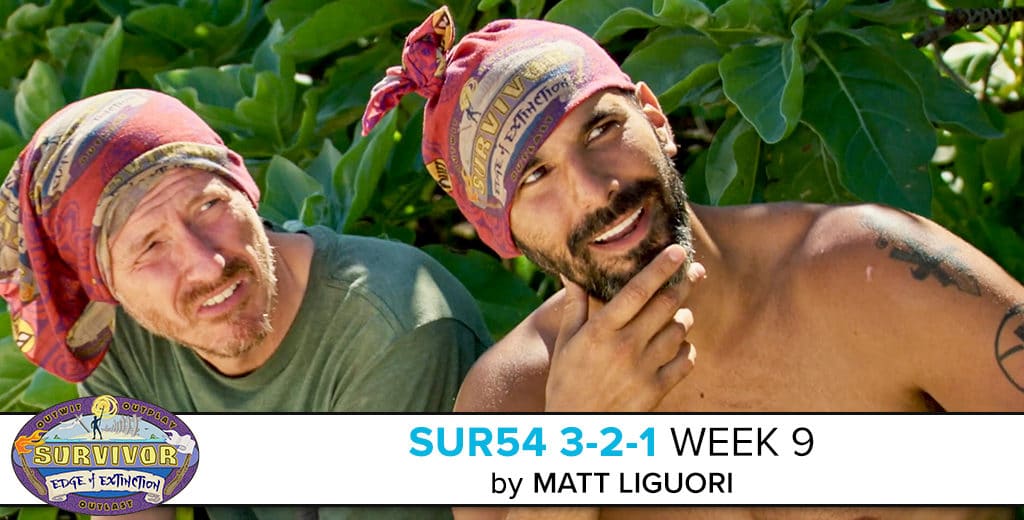 I won’t pretend it hasn’t been a rough week after watching Wentworth’s season come to an end (for now). I’ve been in Kelley’s corner for a long time and I thought this could be the season she took it all the way, but I’m thrilled we got to see her play again and I’m impressed with how long she was able to last with such a big target on her back. As for David, I came into the season being a fan, but still feel like I’m walking away having enjoyed him even more on a second time around than I did in Millennials vs. GenX. Of course, the true tragedy here is the fact that both Kelley and David were in my top 3 last week. It’s sad to see them go, but it’s exciting to anticipate what the newbies will do now that the game is back in their control.

I had a great time watching last week’s episode at the Punch Line Comedy Club in Philly! The Live Know-It-Alls events are always a great time and this one was no exception. The episode was good, the crowd was great, and the podcast that followed was even better! If you stopped me to say “hi” … it was great to meet/see you! I really appreciate all the support on the blog and Big Brother updates and everything, ya’ll are the best.

After watching The Wardog pull off his second successful Tribal Council of the episode, I turned to Taran Armstrong sitting next to me and the look of awe on his face was eye opening. My gut reaction was filled with emotions… mostly anger at the guy who just took down two returnees I’ve been a big fan of. The Wardog really did do something big here and as many have pointed out, he led the charge on something no other newbie has successfully done in a season with returnees. All of the returnees have been voted out.

The Wardog put aside the alliance he’d voted with since day 3 to ensure one of the biggest threats in the game wouldn’t get too far, giving himself a huge amount of control going forward. That control isn’t guaranteed, so he’ll still have to be careful as he approaches the upcoming votes… but given what he’s been able to do thus far it’s hard to bet against him.

Despite losing his closest ally, Devens ended the episode on a high note as one of his main adversaries was voted out. There was no fixing the relationship between Devens and Wentworth for whatever reason, and now that she’s gone he can focus his energy somewhere else. If I were Devens, I’d keep The Wardog close. Wardog already took down David and Wentworth despite them being his former Manu tribemates, and after the spat Devens and The Wardog had a few votes back, you’re going to want to keep him on a leash to ensure he isn’t coming for you next.

Rick had a loose connection with Julie around the merge and there are other numbers on the board that shouldn’t be too hard to pick up. Gavin, Aurora, and Victoria are all looking to survive another day and if Devens can take any of them under his wing alongside The Wardog, they can have full control of the game all the way down the home stretch. Can Rick win the game after having been voted out? It’s definitely possible.

My gut says Julie is playing a bottom two game right now. She seems to be voting emotionally without a whole lot of thought about how each decision will effect her in the long-term. So how does Julie get a spot in the top 3? At this point I’m just rebelling against my own system. I’ve still yet to have anyone in the bottom two go home this season. As mentioned above, last week I lost two members of my top 3 (David/Kelley) so I’m trying to also think about “who is in a safe spot” in addition to the usual “who is in a powerful position/playing super well”.

Julie has won an immunity challenge but as the “older” Mom of the tribe, she’s probably been perceived as much weaker than we know she is. Her emotional side shining through has likely kept the rest of her tribe feeling like she isn’t a very big threat. If that is the perception of her, she’ll have no issue making final 3 because other players will think they can beat her. Securing the jury votes might a tall order, but getting there is half the battle.

Aurora’s time at the bottom continues, as another two rounds of voting go by where her name was very much in the conversation. Aurora still doesn’t have any allies. Julie wants her out so badly she was willing to leave a powerful trio in the game in order to vote for Aurora. If she has one thing going for her, it’s her ability to win immunity. The smaller the field, the bigger her chances get each week. It only seems fitting that Joey Amazing’s closest ally becomes an immunity beast in her own right.

Ron had a solid week, having been included on both plans for voting out the final two returning players in the game. But with those top dogs out of the way, the attention is going to turn back to the perceived power players (which Ron has been since the merge).

What brings Ron down to the bottom two for me is the strange timing of Aurora passing over her extra vote advantage. From what we know about Ron, he won’t be too inclined to give the advantage back to Aurora, and if she’s unable to get it back… I’d expect to see some fireworks. If Aurora blows up both of their spots and tells everyone he has the extra vote, you have to imagine one of them could be in trouble for the vote.

After successfully linking up with a new alliance of six to blindside David, Gavin was left in the dark about the very next vote. Ever since sending home his former closest ally Eric, it’s been hard to track exactly where Gavin’s game is headed. He seemed to be floating somewhere in the middle between alliances before recently sticking his flag in the Lesu 3 camp. Gavin still has four other former Kamas in the game to potentially get something going with, as well as Lauren and The Wardog (both of whom he has voted with a few times now). I’m not sure how likely it is that Gavin win, but I see no reason why he can’t get to the finale.