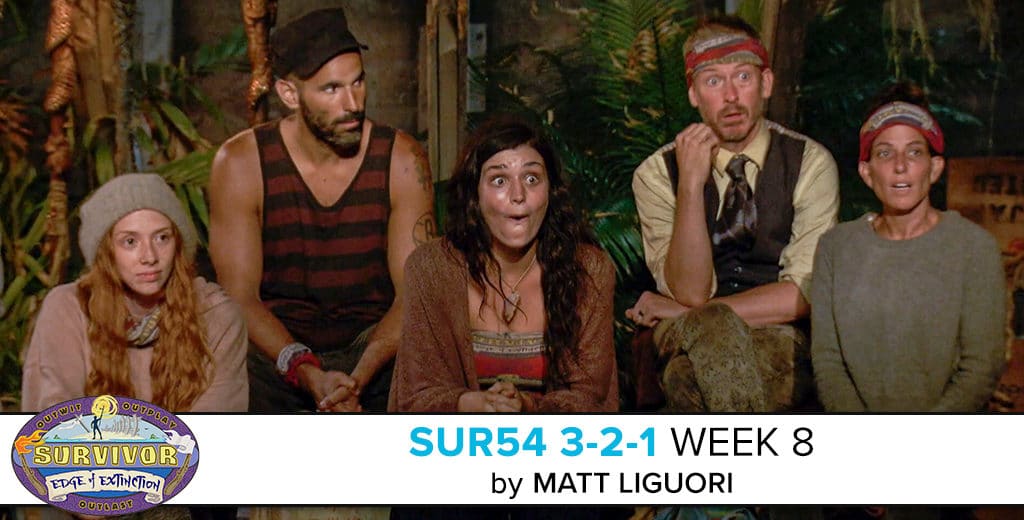 Now THAT is the Survivor I tune in for. I’ve been vocal in the past about how annoyed I get when Tribal Council turns into everyone walking around whispering things we can barely understand, but this one wasn’t the same as those from past seasons. Maybe it’s because it took up an entire half of the episode, but this Tribal Council was filled with drama, entertainment, gameplay, character moments… just about everything you could ask for.

Watching Julia’s game implode from her own comments while Wardog and Rick pushed and pulled as much as possible to ensure she went home… seeing Julie go through emotional highs and lows… watching Kelley and David play with and react to everything going on… it was all really fun! As second/third time players, Kelley and David know how crazy Survivor can get, so to see them experience that Tribal with a bunch of new players who are going through the insanity for the first time was great. Kelley telling David “lol yeah it was you tonight oops!” and David going “aww come on haha thanks for telling me!” was hysterical. I loved it.

The Kama alliance has been broken apart and they seem to be holding on for dear life in hopes of making it one more day. It wasn’t how I thought we’d get here, but Manu seems to be back in control of the game. However, we know our Manus and there’s zero chance they’ll take advantage of that to ensure they all make final 5… without a doubt they’ll keep targeting each other as soon and often as possible.

This week’s 3-2-1 has a lot of things, but yet again it doesn’t have Julie. While she doesn’t fit into any of the categories below, I want to make sure to shout her out here because I can’t tell you how much I’ve enjoyed watching her. Her emotions coming out while she felt like she was in danger was a perfect reminder of how scary it can be to play the game and watch it slip away (even when you may not have had anything to do with it). She’s been a lot of fun and her Tribal Council “I’M READY TO JUMP SHIP” is the hardest I’ve laughed at this show in a while.

David continues to impress, having survived another Tribal Council where he was potentially getting some votes. As his allies helped flip the Tribal on its head, he successfully took out Julia, someone who wasn’t helping his game at all. As mentioned last week, David stays calm at all times and that allows him to reason with people on a level that not many players can. Joking around with Wentworth at Tribal or back at camp about how the two of them can’t seem to stop voting for each other (but still come together when it’s time to put pen to parchment) has been an impressive and effective way to navigate their rocky relationship.

David and Devens wasted their idol this week, but it’s better to be safe than sorry. In a way, David now has one less thing to worry about incase Devens was to try and do something crazy at a later vote. David Wright should not be making it this deep into the game.. he’s way too big of an endgame threat. But he’s getting there and all the credit to him for making it happen.

Remember a few weeks back when Wendy was still around and Kelley talked about “If you come for me… you better watch out.” Just to remind everyone… she meant it. Two weeks in a row, the player voted out went into Tribal Council with a plan to send home Kelley Wentworth and two weeks in a row, that player went to the Edge of Extinction themselves instead.

Despite the target it puts on your back, being a returnee no doubt has its advantages for Kelley and David. David described his “spidey senses” (Kelley usually just mentions her gut), they’re both able to pick up on the vibes around camp when they may be in danger. Kelley read the Kama tribe like a book written for preschoolers; had Tribal not blown up so drastically, Kelley was prepared to break out her idol because the signs were there clear as day. Somehow yet again, Wentworth and Lauren were both able to keep those safety nets tucked away for another day.

Numbers are dwindling. We’re down to 10 players left in the main game and Wentworth remains in a tight group of three, looking like they’ll stay loyal until the very end. It’s not great to see that every other player has identified that trio for the powerhouse they are, but until someone does something about it and those idols are forced to come out, Wentworth remains on top.

Coming off an impressive showing last week, The Wardog regrouped with his core alliance, as well as some of the Kamas who worked with him last week and looked to be on the same page. By the time Tribal came around plans shifted in all different directions but the Manus were able to pull it together and come out on top. The Wardog was great at Tribal Council, turning to Ron and Julie and telling them “whoever you guys want to vote, I’ll do it and so will they [Kelley/Lauren]… if you want to vote Aurora, it’s Aurora.” He showed some trust (sprinkled in with a subtle offer of safety) and in return got the result he wanted. The connections Wardog has made could come in handy at any one of these votes. If he can keep Gavin close and potentially pull in Ron and Julie, that six would have the majority with Wardog at the center of it all.

Unfortunately for Aurora, that pivotal swing vote role seems to have expired (as those spots usually do). The hope tends to be that while you’re a swing vote, you build something with the side you vote with that can be used in the coming weeks. But did that happen here? It doesn’t look like it.

After the Eric vote, Aurora seemed to still be a free agent. The Kama group was working on a reunion while she, Gavin, Julia, and Victoria still had their toes dipped in the Manu waters. At Tribal Council, lines became clear and Aurora ended up on the bottom alongside her swing-vote Kamas after the rest of the players decided to take matters into their own hands.

Things aren’t looking great for Aurora going forward given she’s not in any alliances. She’s shown herself capable to win an immunity challenge which gives her just enough of a threat level to be a justified boot at any given upcoming vote. It’s hard to hang around in Survivor without anybody truly having your back.

It breaks your heart to read it and it breaks my heart to write it. Victoria once seemed to be in a really great position, surrounded by her Kama alliance full of targets much bigger than her which should’ve allowed her to glide on through all the way to the end. After sending home Eric and Julia back-to-back, Victoria’s numbers have vanished. The final 10 consists of three tight groups (Lesu 3, David/Devens, Ron/Julie) with Victoria, Gavin, and Aurora floating in the middle of nowhere hoping to find some footing before it’s too late.

Looking ahead, Gavin has made inroads with the Lesu trio, leaving Aurora and Victoria as the two wildcards. Victoria is still nowhere near the bigger target out there and if she can nest herself inside of a voting block, she could be just fine. But with Ron already throwing her name out there (how funny was that?) and the Manus having no investment in her as an ally, she’s not positioned well at all.

Devens recovered from his terrible performance last round relatively well here. As the picture became clear of the Kama fractures going into the vote, Devens opened discussions about potentially changing up everybody’s plans. What seemed like another attempt to take out David or Wentworth turned into another Kama member going home… specifically a Kama member who was not on the same page as Rick Devens. In any normal week Devens would probably land in the top 3 for getting the ball rolling on such a crucial vote, but after being in last week’s bottom 2 due to a messy week of his own on the Eric vote, he’ll spend a week floating somewhere in the middle as our one to watch.

Make no mistake about it, Devens will never be able to fully trust the Kelley/Lauren/Wardog trio again this season. If that’s how he wants to let things play out, fine, but he needs to ensure the numbers are there to take them out. As of now, it looks like there are people who potentially would work with those three and if he continues to give up that path to the finale to players like Gavin or Aurora, it could be his name being written down sooner than he’d like.