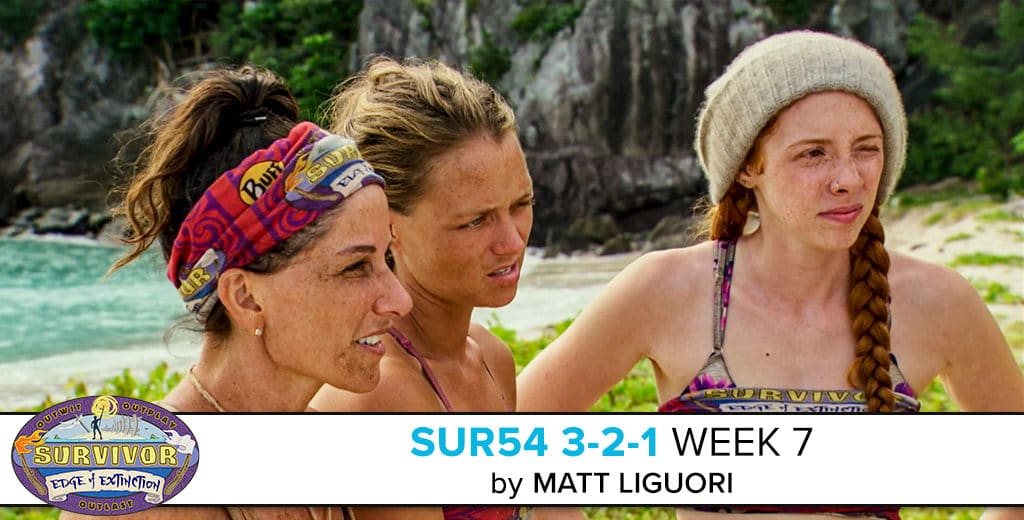 The great thing about having such a wacky season on our hands is that the editing hasn’t really been able to lead us to any obvious results at Tribal Council each week. Nothing that happened in last week’s merge episode would’ve indicated that Eric would be going out the following week at the hands of his own Kama alliance. If a Kama were to be in trouble, most of us probably thought it would be because the Manu five reunited (plus Aurora) to ensure the Kama alliance didn’t take over the game… but Rick Devens had other plans.

Gavin, Julia, and Victoria became threatened by their best friends’ new best friends, realizing that Ron and Eric were getting too close to Devens and David. It’s a reasonable concern to have; why would Ron and Eric need more friends if the Kama alliance was all so trusting in each other? Thanks to some legwork put in by The Wardog, the former Manus lived to see another day and send a second consecutive Kama to the Edge of Extinction.

Last week’s top 3 consisted of Kelley, Rick, and Julie. Julie disappeared a bit this week as she and her buddies were blindsided, but Kelley and Rick were right there in the thick off all the action. After spending two weeks in the bottom two, Julia had a pretty solid week and shoved that in my stupid face. Julia and Gavin could be this season’s Dr. Alison and Alec: relatively quiet players in the pre-merge who come alive to mix things up and get involved in all the action post-merge.

The Wardog deserves a lot of credit this week for getting back to work and successfully taking down one of the two Kama leaders. We didn’t hear much from The Wardog last week given how the merge episode was all over the place and ended in Kama taking out one of their own. The Wardog took full advantage of that gift and used Eric’s own assets that “they worked so hard to acquire” to flip the script and send him packing. It seemed like The Wardog wouldn’t be getting his way this round after Devens flat out rejected his call for a truce. That wasn’t an easy argument to navigate and while it didn’t end so great, it also didn’t end in Devens getting anywhere with the people he put his trust in.

The Wardog opening the door to work with the young Kamas worked perfectly. It seemed like Gavin, Julia, and Victoria had already started discussing that a move would need to be made eventually, but The Wardog gave them the nudge necessary to expedite the process and it worked. I expect to see The Wardog stick around for the long-haul; he’s not a challenge threat and he’s got lines of communication open with a decent amount of other players.

It’s been a minute since we last checked in with David. Things were going south at the old Manu and Lesu camps. While David was beginning to lose control, his tribemates were finding idols and keeping him on the outs. The merge rolled around and David reunited with his closest ally Rick Devens, but one vote later, Devens decides he wants nothing to do with David if David wants to work with old-Manu. It’s been a rough go, but David earns a spot in the top 3 for his effectively calm approach to the game in such a critical time.

David and Kelley wisely came back together this week to apologize and acknowledge they need each other moving forward. It’s the obvious move, but not everyone was thinking rationally *cough cough* Devens *cough*. David also earns points for not giving back his half of the idol. Devens may have done something stupid, but David was persistent and ended up being successful. Driving the game rather than being a passenger is always a good plan if you can work your way there without being too obvious, and David took the first step towards making that a reality.

It’s impressive how Aurora went from not being on our televisions for the first six weeks of the season to landing a spot in this week’s top 3. Aurora worked her position as a swing vote much better than Joe did when it was his role for the taking. Aurora was out and about talking to people and ensuring those who screwed her over felt bad and were going to include her going forward. She worked the phone lines during the immunity challenge, reinforcing how she’s on the bottom and wanted a sign of trust from Victoria; the negotiating didn’t do much, but I’d say it did still help to remind the Manu people that Aurora is on the bottom and available.

Aurora’s big episode was wrapped in a pretty bow when she was gifted the extra vote advantage from Aubry. We’ll have to wait and see how she decides to use that, but given the swing vote spot she’s currently in, she may be able to hold onto it for a few votes and use it when the stakes are higher. Either that… or she’ll use it this week and cause those huge jury reactions we saw in next week’s preview. Aurora hasn’t been a huge character so far, but she wouldn’t be the first player to wake up halfway through the season and make a splash.

There’s nowhere to go but down from here. It’s only a matter of time before Ron’s puppet-master ways catch up with him, sending him right down the same path to the Edge of Extinction that Eric took. Any momentum Ron had has been lost due to some over-confidence and maybe overplaying. Bringing in Devens and David wasn’t worth their time, given how it made members of their alliance feel less safe and/or valued. I have to imagine if Julia actually was pushing to vote Devens or David, Ron would’ve been just as hesitant as Eric was.

Going forward, Ron has to hope he can make up with his Kama alliance and get them back in a position to make anything happen before they’ve lost any shot at keeping the control they once had. But again, given all the Manu idols out there, I’m not counting on it.

Alexa, play “We Are Never Getting Back Together” by Taylor Swift. (Please note: if this song ends up in the Wandoff, you’ll have to take my word that I thought of it first.)

Here’s a hot take: Devens could’ve played this round much better! I have no idea what got into him… whether it was Reem and friends at Extinction insisting “whoever goes back in, do NOT work with our old tribe” or just some pent up anger. It’s one thing to acknowledge an offer from people you don’t want to work with… nod and agree… then vote however you want to at Tribal Council. But to laugh in The Wardog’s face and yell at David about how there’s zero chance he’d ever want to work with a block of FOUR people is some of the worst Survivor gameplay you could draw up.

This is a guy who was first voted out in an extremely emotional Tribal Council where everyone was sad to see him go. Fast-forward and Devens barely wants to breathe the same air as Kelley, Lauren, or Wardog. Regardless, Devens may not be in much trouble next week. If the Kelley and David truce holds, David will ensure the target is directed anywhere but on his closest ally. It’s hard to believe this guy was in the top 3 last week.

You guys tell me if this feels like a cop-out, but sometimes I feel like a spot belongs to a duo rather than an individual. Who makes the rules around here anyways?! So this week’s ones to watch are Fiji’s biggest targets, Wentworth and Lauren.

Wentworth has been targeted at just about every Tribal Council all season, and by association Lauren has also been getting some votes thrown her way lately. You’d think that two people being targeted so consistently would have to be in the bottom two… but not these two.

Both women have had idols for a while now. Lauren has held onto hers since finding it in the first few days of the season, and Wentworth found hers right before the merge. They’ve held their idols close, having solid enough reads at each Tribal Council to the idols weren’t needed. You have to imagine sooner or later, these idols will need to come out of hiding and help them survive a Tribal Council.. but for now things are going just fine!

This duo still has The Wardog in their corner and a temporarily mended fence with David, so they’ve got some things going for them while Kama potentially self-destructs. Either way, all the attention has been on these two and unless they win an invisibility cloak during a reward challenge, that’s not changing anytime soon.