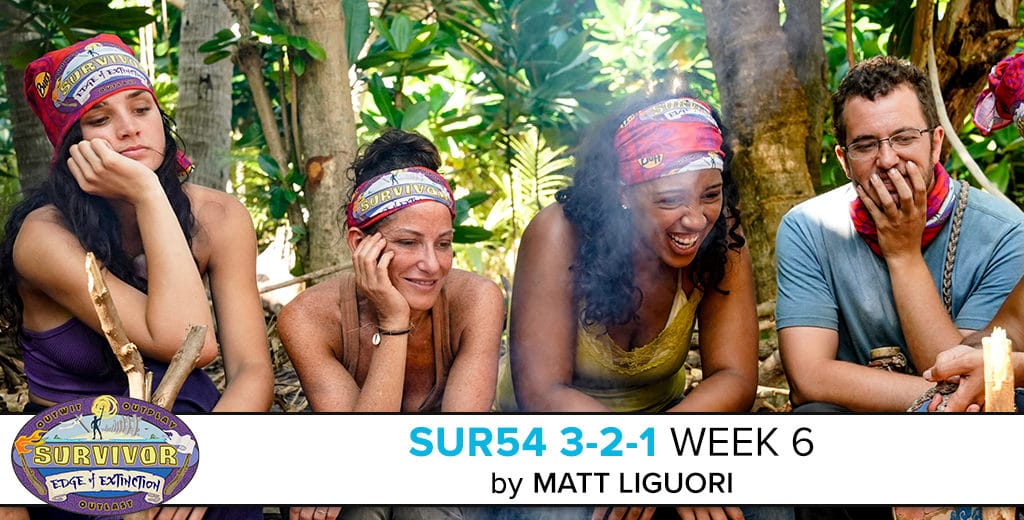 Truth be told, this was not a great episode of Survivor. The merge had way too much content to pack into one hour of television and there was so much left out, which makes figuring out the current game dynamics a tough task. I’m sure more will be explained next time and if you’re watching this all on a binge, you won’t even notice the difference… but I can’t help having so many questions for the time being. Why did Lauren and Kelley want Rick out so badly? How did David and Rick end up outside of the Kama vote if Julie was working with Rick? Why did Kama think it was a good idea to take Joe out now and leave Aurora up for grabs?

To further my displeasure, this week’s episode also contained an idol gifting (certainly not an idol “finding”) when an idol was dropped into Rick’s bag. It seems the goal was rewarding him for making it back in the game so long as he could survive… ONE tribal council? It wasn’t necessary, it wasn’t fair, and it wasn’t fun.

Negativity aside… the episode wasn’t all bad. Seeing Jeff tap into the emotions of the Edge of Extinction crew after they had lost the challenge was really touching. Reem, Chris, and Aubry all pulled on our heartstrings, explaining why it stings so badly to not get to go back into the game after spending all that time on Extinction and knowing how much Survivor means to all of them. This twist is strange, but it’s also pretty hysterical watching the first boot and two other pre-merge boots walk into Tribal Council as members of the jury. We’re probably in for plenty more unexpected turns along the way, so I’ll keep my fingers crossed the idol fairy is done with her work for the season and things play out as close to normal Survivor as possible. I’m still loving most of these newbies and excited to see what they can do now that they’ve essentially taken control of the game.

I’m not sure if it counts, but Keith and Wendy have left the game and given how many times this season I had them both in my bottom two, I’ll admit I feel validated. I don’t fault them at all for leaving. Neither of them were coming back in or winning the game, so go get some food and take a fun two week vacation before getting back to normal life. Of course, as huge Survivor fans we hate to see anyone walk away, but it looks brutal out there and I’m not mad about finally trimming this cast down a little.

Nobody had a bigger episode than Julie, our first individual immunity winner of the season. With the tribes merged, the Kama six came together and fired their first shot in a somewhat unexpected direction. It sounded like Julie was leaning more towards taking out Kelley or Lauren until Ron persuaded everyone to vote Joe. The final outcome actually seems perfect for Julie because now she can’t be thrown under the bus as the one making all the decisions for her alliance.

Julie’s immunity win proved something we’ve all been pretty sure of for weeks, and that’s how much of a badass she is. Julie is really popping off the screen as one of my favorite players of the season; she’s a great narrator, she has her head in the game, and she’s surrounded by an alliance full of bigger-looking threats (despite her showing how strong and capable she is). I don’t have a ton of hope for the Kama alliance, but I have some hope for Julie.

Sometimes the target is so big it becomes invisible. Kelley evaded a torch snuffing yet again despite being targeted for the hundredth time in three weeks. We’ve now seen two consecutive Tribal Councils where you’d think Kelley might have needed to play her idol, but ultimately did not need to and was able to hold onto it for another day. Kelley’s Manu alliance came crumbling down this week and it wasn’t very clear why, but that group of five has to be smart enough to see the bigger picture here and come together to fight off the almighty Kama 6, right? Surely they won’t let the same thing happen this week and eventually all get picked off? Regardless, the idols in Kelley’s and Lauren’s pockets still have me confident that she’s in a good position for the time being.

It would be hard to leave someone out of the top 3 when they have a week as great as Devens’ was despite being on the wrong side of a vote. Rick won his way back into the game and was gifted an idol despite having done zero searching/working to earn it for himself! I’m not mad at Rick for this happening because of course it wasn’t his fault, but I’ll probably never get over how incredibly unnecessary that was. Give him a round of immunity, who cares… but an ENTIRE IDOL?!

Things are looking up for Rick. Knowing that Julie was looking out for him and perhaps could continue to do so is great. If the former Manus can get their act together and pretend the last round of voting didn’t happen, Rick should have protection all around regardless of which side he and David choose going forward.

Great job by Ron last week bringing together his alliance and getting them on board with the target he wanted to go after. Bad job by Ron last week putting that target on Joe and then bragging at Tribal Council about how he had the numbers on his side and how they had nothing to worry about. The next vote will have a lot riding on whether or not Manu comes back together and/or brings out their many idols, and if they do Ron has to be standing out as the head of the Kama snake.

Ron has been implementing the strategy Aubry wanted to use this season… lying low and then striking when the time seems right. But I have to say I think Ron took this shot a little too early and should’ve stayed in the grass a bit longer. The Kama alliance has been exposed and every idol in the game sits in Manu’s pockets. Not ideal.

I hate to do this for a second consecutive week, but this early on in the merge and with a messy episode it’s hard to tell who might really be on the bottom. Julia feels like a safe bet for the bottom two each week simply because we’re not seeing much of her and if she were involved in more gameplay around camp that was relevant to how these votes are going down, I have to think we’d see it.

Like I said last week, Joe outlined a few reasons why Julia will be seen as a threat: she’s smart, athletic, and social (so we’re told). It really feels like a shot in the dark to determine which Kama members will be the first targeted (if at all), but we haven’t seen much of anything from Julia to leave me feeling good about her position in the game.

The one to watch is being passed down to Aurora this week from her closest ally Joe who was taken from her this past week. The guy who should’ve been last week’s swing vote was ultimately voted out, leaving Aurora on an island of her own.

This isn’t Aurora’s first time in this spot. In the preseason I had Aurora as someone who would be worth keeping an eye on because her game could go either way given the big personality she showed in her interviews. She landed on a winning tribe which kept her safe up until now, but in an ironic twist of fate my preseason “one to watch” has been the one we’ve watched the least all season. Aurora surely has surpassed Julia in the race to the bottom of overall screen time. Aurora has been on the outs of the Kama six and unless that changes, she’s now a free agent available for the taking.

Next week will either go one of two ways: Aurora realizes there’s no place for her with the Kamas and joins up with a very dysfunctional group of Manus, or Kama tells Manu they’re willing to cut Aurora next, and Manu agrees, having another boneheaded week… saving themselves and watching another potential ally go to the Edge.