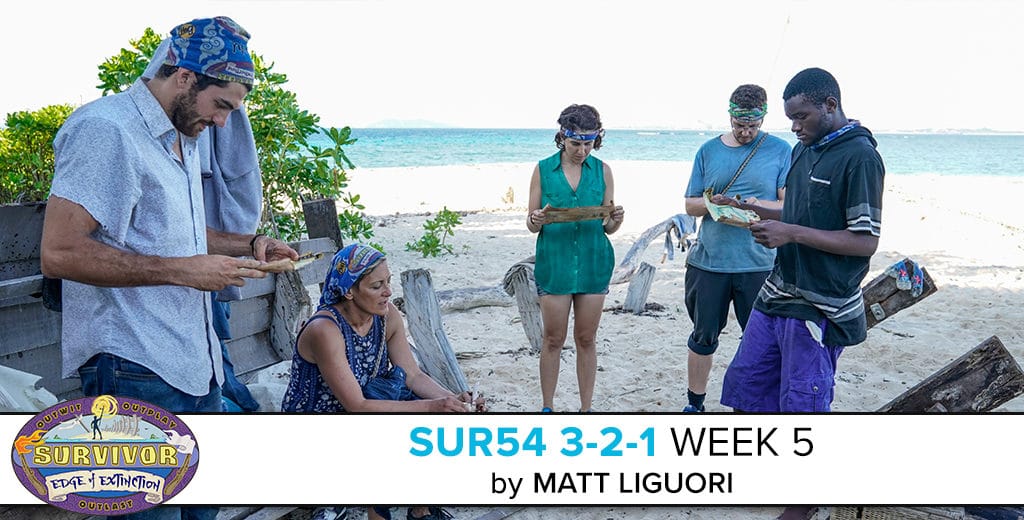 What would a double episode of Survivor be without a double-sized edition of the Survivor 3-2-1? This week, idols were found, a returnee was blindsided, and Wendy gave up her dreams of a new vegetarian lifestyle. The double episode isn’t a common occurrence in pre-merge Survivor, but it really should be. The two episodes were a lot of fun thanks to all of the in-game happenings and the family quarrels over on the Edge of Extinction. Next up, it’s already time for a merge. The Edge of Extinction is currently housing five former Manus and one former Kama, all hungry for a chance to get back in the game and get their second (or fourth) shot.

As I mentioned, we’ve got a double-sized blog this week as I’ll not only be taking a look at the players preparing for the merge, but also the players on the Edge of Extinction!

Well look who is out here breaking Survivor records! Lauren was just talking about how she looked up to Kelley and Parvati as two badass women who found a ton of idols, and now Kelley used that energy to leap over Parvati in the all-time standings. Kelley now has an idol, a best friend with an idol, a Wardog, and a returnee coming back into the game who could potentially be someone looking to team back up with the Lesu 4. Add in the possibility of a voting block with Kelley’s Candy Crush partner Joey Amazing and his Peanut Butter0loving sidekick Aurora (the Kama outsiders) and you’re looking at a really great spot to be in. Kelley wanted to play this season on top and I think we’re seeing a trend in that direction.

Just like Kelley, Lauren is looking good coming out of the pre-merge. I think Lauren’s got a good mind for the game despite how weak she’s appeared at camp. “I don’t go to rocks for Wardog” told me that just like Victoria, she’s here to play hard and I love seeing that. Going to rocks may make good TV, but it’s never worth risking your own game.. especially this early in a season.

With an idol in her pocket and having just survived an intense Tribal Council, Lauren has to be feeling pretty confident. The merge feast has arrived, which it seems like Lauren needs badly to fuel herself up and hit the ground running towards the endgame. As mentioned above, I feel good about the Lesu 4, but even if that wasn’t the case Lauren still has Kelley and David as two big targets on either side of her.

I knew I liked Victoria, but I didn’t I know I loved Victoria. I’m so excited about the way she’s playing and about her mindset going into each vote. Going to rocks? No thank you. Aubry wasn’t going to be helping Victoria win Survivor… so Victoria was right, Aubry had to go. Outplaying a three-time Survivor vet is incredibly impressive. No matter how badly Aubry may have read the situation, a returnee can usually pick up on cues and identify when they’re in danger,  but Victoria had her beat.

I think the Kama people are going to be in some trouble. If Joe has anything to do with their demise, Victoria is someone Joe said he has a hard time reading and might want to target. So I’m a little worried about Victoria as we head into the merge, but not enough to make me kick her out of the top 3 after such an impressive week. Victoria is willing to do what it takes to win and I’m here for it.

Ok, I’m really cheating here… don’t @ me. I imagine the Lesu 4 will make it through this first vote, either because they pull in numbers or they use their two idols as protection. Lesu’s target is going to be someone they don’t think has an idol, but also one of the biggest targets on that Kama side. It’s impossible to tell which way they’d prefer to go between Eric or Gavin, but it’s clear these two are a strong pair and could be at the top of the Kama food chain. Lesu has now gone to Tribal Council with Eric and Gavin and they know these guys are tight. They’ve yet to meet JuliA, JuliE, or Ron though, which makes picking off an Eric or Gavin seem like an easier way to get started chipping away at that alliance.

Well this is pretty unfortunate; Julia gets her first few confessionals of the season and immediately finds herself in the bottom two. Essentially, see all of the above as for why I’m putting two (three) OG Kama members in the bottom two. I’m looking at this from the perspective of Lesu all surviving the first vote and the merge boot will be whomever they choose to vote for. After hearing Joe lay out directly to Julia this week all of the reasons she could be a big threat at the merge, it wouldn’t be a surprise to see that come to fruition as soon as this week.

You’d think once the merge hits, Joe automatically becomes a lock for the bottom two each week until he’s voted out (especially with the added in target of being a returnee). This season is shaping up a little differently and it’s not even because of EOE. Joe’s been a big target on the Kama tribe since day one. Knowing he’s an outcast, Joe has no reason to stick by Kama’s side… especially after seeing his former tribemates take Aubry out of the game. The Lesu 4 is going to be looking for numbers to pick up and what better place to start than with someone already outcast from his tribe.

Joe will always be Joey Amazing, so there’s a chance that the Lesu 4 come together with the Kama alliance to agree on taking Joe out first as an easy vote. But we can’t forget that this is where Joey Amazing’s superpowers kick into the next level. Individual immunity wins are in Joe’s blood and him going on an immunity run is absolutely in the cards.

There’s plenty of reasons to be concerned about Chris winning the challenge if Keith’s advantage comes into play. It can’t be so drastic where you literally can’t win, so I still think Chris is a top contender to re-enter the game. I’m not sure where Chris would fit back in should he re-enter, but he’s the closest in this six to a Joey Amazing type who could be good at any challenge they might compete in.

Being voted out on your third chance while having an idol and an extra vote in your pocket is brutal. I wouldn’t say Aubry has the best chance to get back (especially given the insane amount of pressure she’ll feel while competing), but her determination is essentially unmatched compared to any of her opponents. All eyes will be on Aubry as the one returning player competing. Aubry isn’t bad in challenges; she’s won individual immunity before and if this challenge has been done before in Survivor history, I’m sure Aubry will have an idea on how to beat it.

The one thing we’ve learned about Rick in his time on the Edge of Extinction is how intelligent he is. If there’s a puzzle involved in this challenge or anything where you need brains over brawn, Rick is a top contender to crack the code and pull out an underdog victory. Rick has a spot back in the game right with his former Manu/Lesu tribe should he return. His story in the season feels incomplete (especially with David still hanging around), so I wouldn’t be shocked to see him get back in.

It’s pretty funny to see what’s been happening with Keith on the Edge of Extinction. He’s pushing himself and going against the grain trying to get himself further, sometimes at the expense of the other players around him. Good for him! Only one person is getting back in (for now) and I’m glad he’s trying to make sure that’ll be him. Ultimately, Keith is a very weak challenge performer and I don’t have the confidence in him to pull out the win.

One thing I’ve learned from watching Wendy this season is that she will not go easily. I had Wendy in my bottom two for three weeks before giving up on the idea that she’d be voted out. She should’ve been and could’ve been gone at any of those early Tribal Councils, but somehow kept surviving and I think some of it might’ve had to do with how much of an asset she was in challenges. Wendy can hold her own and I wouldn’t be even a little surprised to see her make it back in… but I do think she may be outmatched by stronger and more determined opponents. It’s a reunion of my pre-season bottom two as Keith and Wendy seem likely to head back to camp after all is said and done alongside Mama Reem.. left to decide how badly they want to continue “playing” together on the Edge of Extinction.

Reem is not getting back in the game, but Reem Daly is amazing television. The Edge of Extinction is a perfect twist idea which nobody would ever criticize, solely because we get to see Reem for weeks and weeks after her elimination. This “one to watch” isn’t really based on the game, but more literal and coming from a television perspective. Reem is great and I just hope she doesn’t raise the flag after losing the first EOE buyback challenge (as worried as I am that she will).