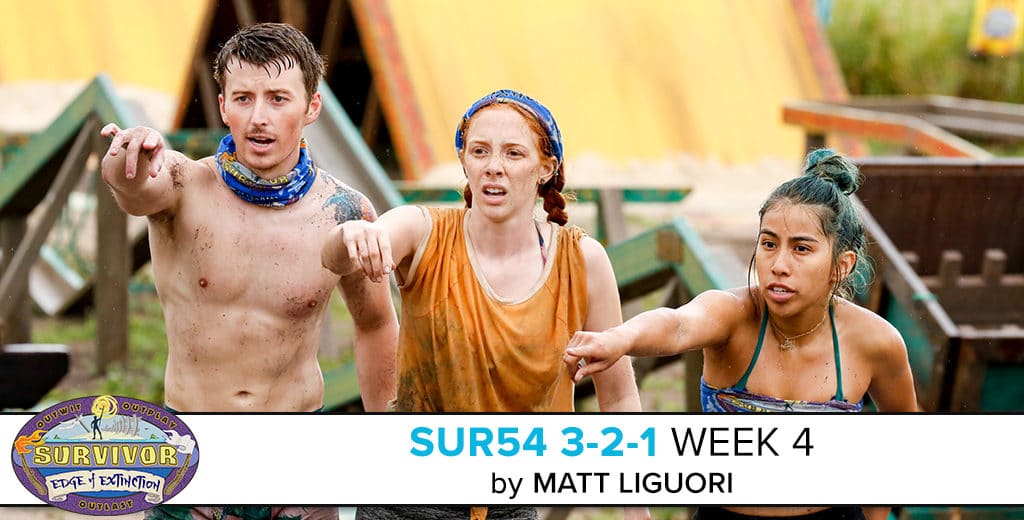 As a noted Survivor: All Stars stan (@ me all you want), I didn’t appreciate last week’s episode making it seem like that bizarre tribe swap was the first of its kind. Amber Brkich and the Mogo Mogos-turned-Chaperas would like to have a word with you, Jeff. (And you too Gavin.)

So we’ve got some new tribes.. kind of. It wasn’t exactly the switch-up I was hoping for, but it did break things up a little. Seeing four players getting to meet Big Wendy for the first time was certainly worth watching. You could see it all over their faces how intrigued they were by this fiery chicken-loving ball of energy, and the reactions varied. Some saw the value in having Wendy in the game while some grew quickly frustrated at her freeing the tribe’s dinner.

Seeing the new Lesu (former Manu) tribe suffer another loss was tough to watch, as that group of five can’t seem to catch a break. The big question here is, will it happen again next week or is this the four that will carry them to finally win an immunity challenge? I think they can do it.

Over on Kama 2.0, spirits were just as high as on Kama 1.0 despite some of their backup dancers being shipped over to Manu. The big question for the Kama camp is… will we get our first JuliA confessional of the season before we get our third JuliE confessional about peeing? That’s a really tough call, but with not much else happening over there, I plan to keep track.

It would be tough to draw up a better set of circumstances over on Kama 2.0 for Ron. Two members from his alliance of six were swapped with him, JuliA and JuliE, along with two clear outsiders, Joe and Aurora. This week we saw Joe working on Ron to ensure they’d vote together moving forward, putting Ron right in the middle of the tribe. As the swing vote, Ron should have nothing to worry about until the merge rolls around. It’s a shame he never got to use his advantage, but coming out of the pre-merge with a potential strong six is infinitely more useful than any reward steal could have been.

After being last week’s one to watch, it’s time to put Wentworth in the top 3 and acknowledge the impressive fact that after being targeted three weeks straight, she’s survived and now sits in an ideal spot on her new tribe. We’ve come a long way since the unlucky tribe swap of San Juan del Sur. This switch-up kept Kelley together with her closest ally Lauren and a guy who’s gone to bat for her every week, The Wardog.

This trio has something nobody else in the game does: they’ve never swayed from each other and have voted together four times now. David wanted to take Kelley down, but his army of potential votes are slowly being sent to the Edge of Extinction, and any chance of that happening at this point will have to wait until the merge (if he makes it the far). Let’s not forget that Kelley warned us last week… “If you come for me… watch out.”

The Wardog returns to the top 3 yet again after another week of getting the Tribal Council result he wanted, bringing his record up to 4-for-4. Wardog has kept Kelley and Lauren close, convincing the others to take out Keith first and then Chris. Now, with a very lucky tripe swap, the trio remains together and can survive up to two Tribal Councils by voting out Rick and David next if needed.

The perception of Wardog as a player seems to be someone a little tough to reason with or get a great read on, but his loyalty has been proven. As long as Kelley can keep his head on straight and he doesn’t get carried away once they hit the merge, this trio could be a real force to be reckoned with.

As expected last week, any which way Joe swapped would’ve been a very sticky situation unless he ended up with both Aurora and Aubry. (Swapping with your two closest allies? Impossible.) This week he put in work trying to get Ron on his side and feeling comfortable moving forward together. Did it work? Probably not, given Ron and JuliA’s scheming behind the scenes to look through Joe’s belongings and ensure he doesn’t have the idol.

If that bag search hadn’t happened, Aurora likely would’ve had this spot in the bottom two as I would think Ron, JuliA, and JuliE might’ve wanted to take out Joe’s right hand… keeping Joe himself around for challenge strength and being careful incase he had an idol. But being this close to the merge and having assurance that Joe has no protection, it’s hard to see them not taking a shot directly his way if they have a chance to do so.

My original thought was that David got pretty unlucky with this tribe swap. If one buff went differently and Kelley, Lauren, and The Wardog were not all there together, David might still have Rick in the game and have the upper hand. But when you think about it, this swap may have actually given David his best odds at survival. In most seasons with a 9–6 advantage of one tribe-to-another, the smaller tribe would end up down in numbers and likely picked off without question.

Regardless, this is where David landed and looking ahead he’s the clear next boot on the Lesu tribe. The preview seemed to indicate The Wardog could want Lauren out for being “weaker” but I don’t see it happening. David needs to pull through with some immunity challenge performances of a lifetime and get himself to the merge.

The new Manu tribe looks strong. They’ve got strength, brains, and Big Wendy. If I had to pick one tribe that could avoid Tribal until the merge, my money would be on them. If they did lose, Victoria is in the safest spot/a potential swing position if there is one. Aubry acknowledged the value she sees in Wendy and we know how tight Eric and Gavin are. So if the time potentially comes, Victoria should be safe in the middle and have a big say in which way the vote goes.

It’s been fun to watch Victoria so far. She’s got some good reads on the game and players all around her, but I’ve yet to determine how confident I am in her ability to take that intelligence and apply it towards a successful post-merge game. Just like when she realized she probably should be looking for idols but wasn’t… I’m worried Victoria may see the path for her to be successful but end up giving someone else the upper hand after waiting too long to strike. We’ll have to see, but that all makes her my current one to watch.