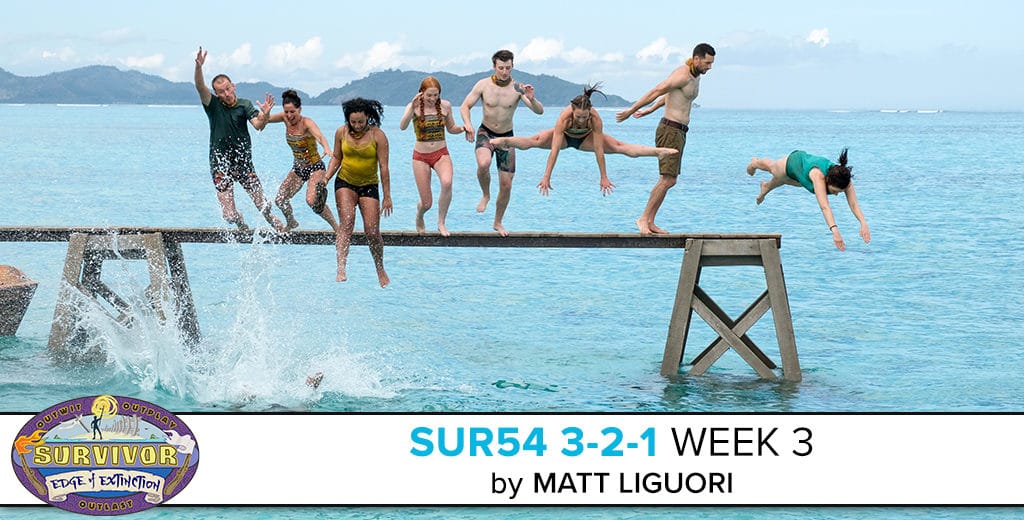 A tribe swap could not be happening at a better time. Anytime a tribe goes on a losing streak this bad this early, a mix-up is the only thing that can keep the game exciting. The swap is even more crucial this season because any extra time we might’ve had for Kama has been dedicated to the Edge of Extinction… and also in this particular episode to a reward challenge (why?) and fallout with Wendy Trang-Kappenberg and the chickens. It’s time to get some different dynamics going and see if we can build up new storylines outside of Kelley vs. David/Wendy.

After last week’s episode, we’ve got a SUR54 3-2-1 first! Chris Underwood, last week’s one to watch, is the first “one to watch” to be voted out in the following episode. We’ve lost players from the top three before (oops) and of course the bottom two, but I’ve never lost the “one”. So while we wait to see if Chris can win his way back into the game, at least he’s got this impressive achievement going for him.

Given the upcoming tribe swap, a couple of my picks below may come as a bit of a #blindside depending on how you look at it. It’s impossible to figure out who will end up in a good/bad spot after a randomized swap in the first place, let alone on a season with an entire tribe we’ve barely gotten to know. So some of this week’s assessments are based on what we’ve learned of these players in three weeks and how their gameplay appears set to carry them further into the next stage.

Aubry has made her way from one of the worst positions in the game to having protection from a hidden idol and an opportunity at a fresh start in the form of a tribe swap. Things at Kama were looking grim, but it turns out she wasn’t completely on her own; this week we saw that Joe and Aurora were sticking by her side despite being in the minority. She has to be hoping at least one of those two are swapped onto her new tribe. Two in five just needs plus one to equal in… right Culpepper? Regardless, Aubry isn’t going home next thanks to the newest item crossed off her Survivor bucket list. The boost of confidence from the idol should be helpful in attempting to get something new going.

In Edge of Extinction‘s few episodes thus far, we haven’t seen much from Gavin to lead me to believe I was misguided in the preseason confidence I had in him. As far as we know, Gavin is tight with Eric and the two of them have been nested inside this bigger alliance of six on the Kama tribe. Gavin has been helpful in challenges, he isn’t anybody’s target, and he’s been actively aware/searching for idols (unlike other members of his tribe who acknowledged they should’ve been looking but weren’t). As I mentioned above, this week’s placements are essentially a reset… and my feelings about Gavin as a player are unchanged. I think he’s going to do really well with this swap and into the rest of the game.

Lauren’s getting a second consecutive week up at the top thanks to her idol find from last week. Given the unpredictability of swaps, knowing Lauren has that same idol protection as Aubry leaves me feeling good about her safety. Since the season started, Lauren’s appeared to be doing just fine blending in with her tribe and working the social game. She paired up with a big target, giving her a shield to hide behind and at least two strong allies to move forward with.

Part of me wonders if Lauren will get a chance to play with Joey Amazing on a new swapped tribe, given her episode one confessional about how excited she was to see both him (her Survivor crush) and Kelley Wentworth when they pulled up on the boat. That would just be too perfect for this superfan living out her dream.

Aurora was my preseason pick as one to watch and after three weeks I’ll admit I’m worried about her. We heard right away that she’s #TeamJoe… but #TeamJoe on Kama seemed like a #sinkingship. It’s hard to say how Aurora got so separated from the rest of her fellow newbies to be the only one outcast with the returnees, but if she’s willing to settle being outside of the numbers this early on it’s not a good sign for things to come. Granted, we haven’t heard Aurora’s thoughts on how she landed where she did, but the clear separation is cause for concern. If Aurora gets swapped away from Joe and/or Aubry, I could see former Kama members from the alliance of six sparing a Manu or two to take out Joe’s right hand woman.

It hasn’t been too surprising seeing Joey Amazing on the outs of his tribe this season. It has nothing to do with Joe as a person or a player.. more so as a concept. Somebody nicknamed “Joey Amazing” will never do well as one of four returnees brought back to any season of Survivor. If there was one thing for sure since this cast was announced, it was that at some point Joe Anglim would be voted out and sent to the Edge of Extinction.

Now that we’re getting into tiny tribes of five, the door is wide open for anyone to take that shot and avoid having to go up against Joe at the merge. There are very few players who have Joe’s back going forward: Aurora and Aubry for sure, and potentially his Candy Crush partner Kelley Wentworth. If Joe doesn’t swap with at least two of them (pretty low chances), he could be in some deep trouble. To be fair, Joe’s tribes don’t often lose immunity challenges… but when you’re relying on an immunity win as the only way to ensure your survival you’re going to likely find yourself in the bottom two.

It’s been quite the wild ride for Kelley Wentworth to start off this season. Not only has Wendy been openly gunning for her, Rick and David have been scheming behind the scenes to take a shot. But hey, would you look at that… none of it worked! We’re heading into the swap and all attempts at blindsiding Wentworth have failed, while she’s built herself a solid little trio with Lauren and The Wardog.

I had a lot of confidence in Kelley coming into the season and I don’t think she’s done anything to change that. This swap could go either way, but regardless of what happens next there’s no doubt that Kelley has been the one we’ve been watching all season long and the one we’ll continue to watch next week to see if these “Take Wentworth Down” troops continue their (thus far losing) battle, or back off and move onto a new plan.

Release the chickens, take the flint wherever you want… I’m not about to let Sia find out I placed you in the bottom two for a fourth consecutive week.

Well that was a waste of a perfectly good menu, huh? Whoops.

He may be Amazing, but he isn’t invisible. It’s not even like the beanie was covering your eyes, what happened there?!

Raise that flag Mama Reem. I won’t hold it against you. Keith will be fine in Chris’ loving arms.