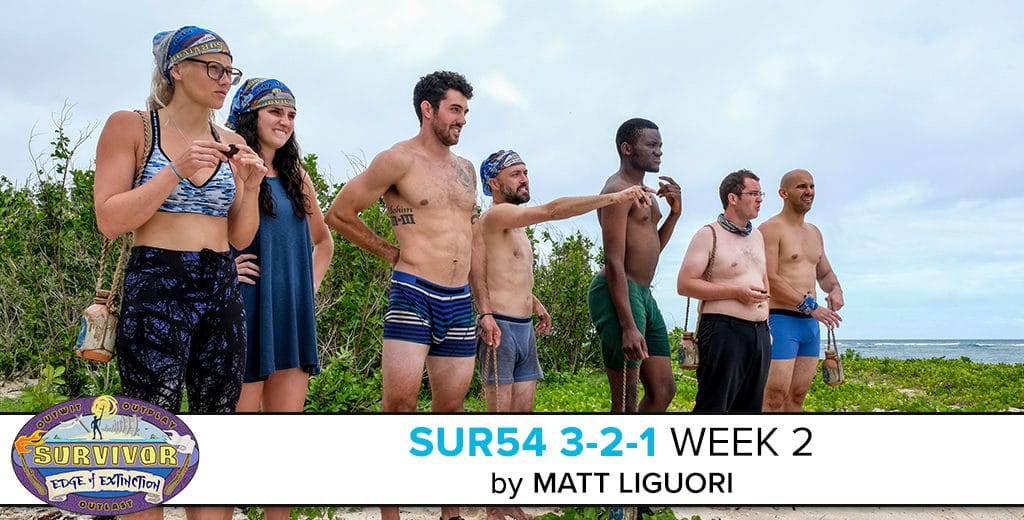 If you thought this season would be a steamroll of the four returning players over a bunch of newbies, think again. This week’s episode proved that the new players are out for blood and they’re coming after the returnees hard. Both camps set their sights on some big threats as Kelley and Aubry fell fast down their tribes’ ranks. Luckily for Aubry, her tribe seems nearly unstoppable with tons of momentum and spirits high after back-to-back wins. Over at Manu, Wentworth needs to hope and pray that her connections with Wardog and Lauren are enough to find one more vote and take out Wendy if they go back to Tribal.

Last week’s top 3 consisted of Newscaster Rick, David Wright, and Firefighter Eric. Rick and David almost got too ahead of themselves with a plan to blindside Wentworth, despite an obvious weak link in challenges (Keith) having to stay in the game in order to do so. It’ll be very interesting to see what happens back at camp if Kelley finds out that those guys were leading the charge to take a shot. Both guys fall out of the top 3 this week, but I don’t expect them to be gone for too long.

Wendy and Aubry lived to see another week… barely. I decided at the last minute to swap Keith out for Aubry last week, thinking I’d like to have one player from each tribe in the bottom two. With Wendy at the bottom, I’d said that a terrible challenge performance from Keith could be enough to save her, and it turns out that’s exactly what happened. Keith was overall unprepared for Survivor from where I’m sitting. I suspected his age would be an obstacle given it’s such a big gap between he and the rest of the players and (although it didn’t come up on the episode) I imagine it did play a role on the island. Now we just wait and see if Keith will join the party on Extinction Island for some more swimming lessons with his island Momma.

I couldn’t be happier about Lauren being our first proper-idol finder of the season. If you hadn’t heard… Lauren is a big Survivor fan and an even bigger Kelley Wentworth fan, which on a human level does make this moment feel pretty heartwarming. Ron finding his advantage menu last week wasn’t enough to earn a top 3 spot since his position on the tribe was unclear, but we do know exactly what’s going on at Manu and Lauren appears to be out of harm’s way. With an idol in her pocket and lots of action at camp  not involving her, Lauren’s in a pretty good spot for the next round and going forward; either she’ll lose Kelley soon and become a free agent, or Kelley will stay in the game and remain a shield in front of her.

The Kama tribe is looking pretty unstoppable, and because of that we’ve yet to get a firm layout of the tribe’s alliance breakdown. This week we learned that Aubry’s “personal” conversations aren’t fooling anybody, especially Victoria. It looks like Victoria is talking game with plenty of her fellow newbies as they band together in agreement that the returnees aren’t a part of their future plans. She’s seeing right through the gameplay of a three-time Survivor, rather than sitting back and following the leader like past players out there with returnees have tended to do. Much remains to be seen if Kama ever finds themselves at Tribal Council, but Victoria seems to have some allies in her corner and a good head on her shoulders (despite it being weighed down with the world’s largest beanie).

In the preseason blog I was hopeful on The Wardog’s chances as he planned to avoid acquiring Tony comparisons by slower and blending in out of the gate, and that’s worked out well so far. The Manu tribe needs one thing more than ever right now… strength. The Wardog and Chris are pretty irreplaceable at the moment if Manu wants any chance of battling against Joey Amazing and Firefighter Eric over on Kama.

Challenge strength aside, The Wardog seems comfortably right in the middle of his tribe. We saw him calmly explain to Chris why keeping Wentworth around as a shield makes the most sense, and once Chris was on board it didn’t matter what David and Rick wanted to do. It’s hard to say if The Wardog was the final decision maker for the vote or not, but we know he wanted Keith gone and that’s who left.

With Keith gone, Wendy sits alone at the bottom of the Manu tribe. She made some progress this week, convincing David that she’ll be a loyal number with them if he decided to take out Wentworth. That plan fell through sometime before Tribal, but the idea of Wendy being a potential good ally to have around must still be on Rick and David’s minds going forward.

I hate to put someone in the bottom two for a third week in a row, but it seems like only a matter of time before Wendy’s number is called. Her three (along with Keith and Reem) were outcast from the beginning and now she’s the last one still in the game. As Kelley put it, the war is coming and only one of them will make it out alive. Next week’s preview suggested an injury might hurt Wendy’s game before any potential votes could even begin to, so Kelley has to be the favorite to sneaky-sneak past Manu’s next Tribal Council.

Aubry told us she loves going to the first Tribal Council of the season to see where the lines are, but I’m not sure she would’ve enjoyed the outcome of that Tribal had it taken place. This was as bad of a week as you could imagine for Aubry. These aren’t your Redemption Island set of newbies… they’re here to play and they’re not about to buy whatever it is Aubry’s selling about dialogues. I suspected last week that Aubry was already on the outs after we didn’t see a connection formed between her and any one other player like we did with Joe, Kelley, and David, but this week further solidified the fact that nobody is interested in teaming up with her. Working in Aubry’s favor is how well her tribe has been performing in challenges. She may be in our bottom two again, but if Kama never loses, who cares?! Keep on smiling through the pain of fake kumbayas until you can’t dance anymore.

Chris is this week’s one to watch for a gigantic variety of reasons. After a quiet premiere, this week we nearly got hit in the face with a chance to see everyone and everything Chris is working with, including a package about his bond with Keith. The fact that he was able to bond so well with a guy on the bottom of the tribe says a lot about the kind of social game he’s capable of playing. Like I said for The Wardog, this tribe isn’t in any kind of position where they can afford to lose Chris and his… challenge strength. I’ll be keeping a close eye on his game to see if now that Keith is gone he goes right back to the anti-Wentworth agenda, or if he’s more closely bonded with The Wardog and stays on that path to use Wentworth as a shield. He’ll be the most important vote at Manu’s next Tribal.