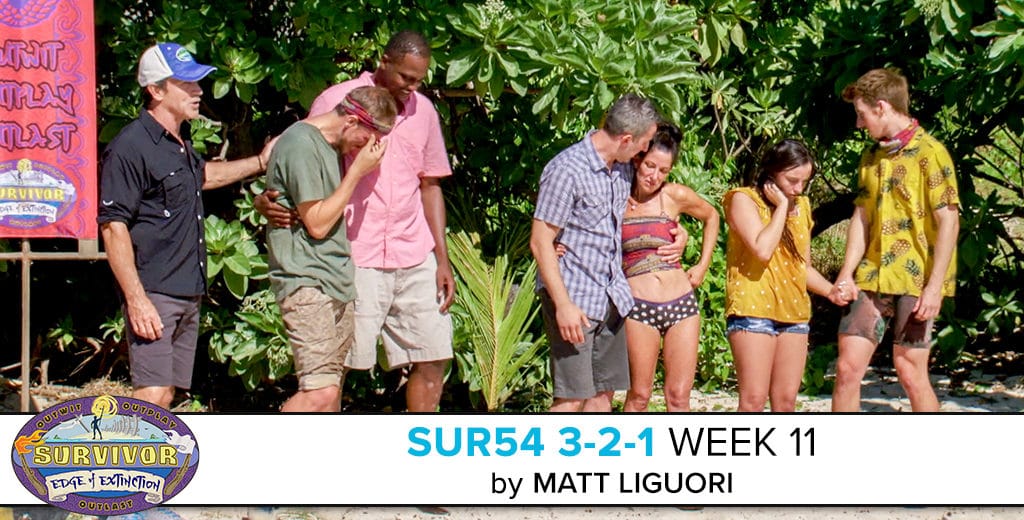 I’ve reached my limit of crying at loved ones visits this week. Between Survivor, BBCAN7, and a little bit on Drag Race, I’ve been such a mess. Survivor‘s loved ones visit wasn’t as much of a tear-jerker as it usually is, but don’t think I wasn’t a wreck when they all came out and the usual Jeff Probst Talk Show crying festival began. This week delivered another fun episode! The performance Devens put on at Tribal Council, watching Ron’s downfall (as much as I truly loved watching him this season), and seeing Victoria and Lauren put a backup plan into action and have it go through… all combined to make up an action-packed antepenultimate episode.

This season is quickly coming to a close but for now we’re at the final six! How weird is that? Final six is usually the finale yet here we are with two episodes still to go. It seems the plan is we’ll lose someone this week and then bounce back up to final six again when someone comes back from Extinction. It’s definitely different but even if you don’t like this season’s experiment.. at least it’s almost over!

It’s sad that Victoria hasn’t had a very glowing edit this season despite being a key player every step of the way. She’s been given credit on occasion for some big moves (taking out Aubry first, followed by all three remaining returnees), but we still don’t have a great view of her long-term game from her perspective or much about how she’s seen by other players.

The way things stand, it looks like Victoria is voting with her original ally Gavin, along with former Kama outsider Aurora, and a new friend in Lauren. The younger players have been together for a bit now but we never saw any confirmation that there’s an actual alliance between them. Victoria has shown she’s willing to cut anybody she needs to, so absolutely nobody should feel safe while she’s still around.

Lauren is another week closer to the final 3 with the idol still in her pocket. Lauren worked closely with Victoria on the plan to put votes on Ron this week to be safe if Devens had an idol (which worked out exactly as intended). Their plan worked and Ron was sent packing, leaving them both in a solid spot within this remaining group of six.

Lauren may eventually face some trouble if the former Kamas realize she has jury votes locked in from Kelley and other former Manus on the Edge of Extinction. But with only a few votes left between now and the final 3, she still has a handful of bigger threats (Devens, Gavin, Aurora) to hide behind.

Gavin is rocking it in the game both strategically and emotionally, as he continues taking in all aspects of the Survivor dream he’s wanted to come true for years. After finally getting to tell his tribemates about his impromptu wedding, Gavin was able to spend some time with his new wife Carly as Ron picked him for the reward. Gavin also pulled out another immunity win to ensure his safety before a Tribal Council where an idol was successfully played and anyone could’ve been in danger.

It was a difficult decision to make; being given the extra vote from Aurora and being asked to use it in a way that didn’t exactly line up with his current strategic desires was a big ask. Ron thought Gavin was working closely with him, making the post-loved ones “betrayal” sting even more. It’s not easy to get to the end of the game without hurting some feelings along the way, but Ron felt pretty bad about what he did to Devens (gifting the expired advantage), so maybe he’ll wind up holding no bitter feelings towards anyone?

Devens’ Survivor game was probably at its lowest when he was getting voted out, but somehow things have only gotten worse since. After making his way back into the game, Devens refused to work with his former allies and made a big scene about it while fighting with The Wardog. He’s survived plenty of votes, but he lost his closest ally and the idol they were holding (unnecessarily) along the way. Now sitting at the top of the “big threat” list, Devens is completely alone. We’ve seen previous winners like Ben or Mike go all the way through any combination of finding idols, winning immunities, and winning fire-making… but is Devens going to be able to pull that off? He’s on the right track with the idols, but there are some great challenge competitors left in this final 6.

Stop me if you’ve heard this story before, but Aurora is back in the bottom two. After a rough week where she wasted her extra vote and got caught sneaking in Devens’ bag, Aurora isn’t feeling like a prime candidate to be our winner. If anything, she’s looking more and more likely to be a losing finalist. Aurora is a very strong challenge competitor and despite Gavin performing just as well (if not better), she still feels like an easy target to put votes on if Devens is somehow safe at the next Tribal Council.

Things could’ve gone a lot better for Julie this week. Having her closest ally voted out while Devens painted both her and Ron as super-villains was not the kind of Tribal Council you want to have only a few days away from a potential jury vote.

More than anyone else, Julie is looking like someone who will face the jury on day 39. She’s seen as a very emotional player… and now with the added label of being villainous, it’s hard to see anyone wanting to vote her out. I still love Julie as much as I have all season and despite her game leaving a little to be desired, I think she should have a decent case to plead to the jury if she gets there.