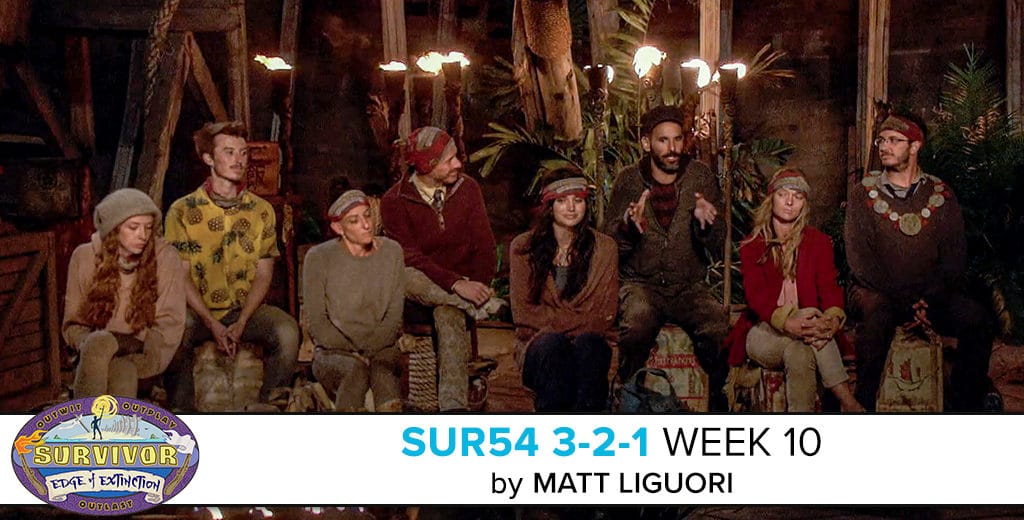 If I haven’t said it enough times.. I really love this cast. There are some great character (both in the game and at the Edge of Extinction) which have kept this season going despite some format roadblocks preventing it from potentially becoming one of the greats. Ron, Julie, Gavin, and Aurora were all relatively quiet pre-merge, but have come alive in a big way post-merge to be a huge part in the how the season is playing out.

Not a whole lot of build up in this week’s blog, so just dive right in!

After last week’s blindside I was worried about Lauren’s future in the game. She seemed well positioned while Kelley was around, having an idol in her pocket (as well as Kelley’s). Wentworth was a great shield for so long, but the purpose of a shield is to ensure if a shot is taken… it hits something (or someone) else before it can get to you, and that’s exactly what happened. This week, Lauren was able to get revenge for her fallen Survivor role model and take out the guy who screwed them both over. The game is now wide open for Lauren to continue her warrior ways and find a path to final 3.

Lauren isn’t tied with anyone remaining in the game. She’s one of two former Manu members among five former Kamas, but the Kamas remain as dysfunctional as ever (despite Wardog helping them last a few extra votes). Lauren’s been all about needing fuel to keep her game going. She got the merge feast, she’s won rewards, she still has her idol, and now the family visit has arrived… she should have enough gas in the tank for the home stretch.

Gavin remains relatively under the radar, having rebounded nicely after being left out of the Wentworth blindside. Gavin told us throughout this week’s episode that his relationship with The Wardog had gone south and he hoped to send him packing. With that plan turning out successful, Gavin is theoretically right where he wants to be. As mentioned last week.. there are plenty of former Kama members still in the game who could benefit from having Gavin as a number. We also know he’s capable of pulling out immunity wins, so as long as he can sneak past a few more votes.. Gavin is another one who may have a wide-open path to the final 3.

Reem has been the star of this season and as we get closer to the finale and some actual endgame analysis in the coming weeks, I need to make sure we’re acknowledging the greatness of our first boot who has kept us entertained for an entire season. It was hysterical to see Wentworth show up at the Edge of Extinction after playing four weeks of Survivor and have to deal with Reem still angry with her for something that happened on day three.

Reem has no shot to beat these challenge beasts and get back in the game. She herself must know that, but she’s taking in as much of the Survivor experience as they’re offering her and I really love that for her. This woman has spent a MONTH and counting staring at the same sand, the same ocean, the same crappy shelter, and the same miserable people.. without any sincere plans to raise the mast. Reem wants her spot on the jury, she wants to watch the season play out live, and she wants to take in an experience no other first boot in Survivor history has had.

This season offers a unique opportunity for this blog which I’ve yet to take advantage of as much as I could’ve. Players voted out of the game aren’t completely gone just yet, which means talking about them in here is still fair game. The Wardog spent a lot of time in the top 3 this season, but an uprising in the districts led to an overthrow of power and The Wardog talking AT people has finally come back to bite him.

There’s been a lot of talk about not making a blindside just to say you did it, and looking back I have to imagine The Wardog regrets blindsiding Wentworth; he immediately became the next biggest target once she left. There’s a reason Domenick and Wendell didn’t take each other out until the very end!

Looking ahead, The Wardog has no shot to get back in the game. We’ve seen his challenge performances and they’re down there with some of the other worst competitors in Survivor history. While he’s made a name for himself and was a huge player this season, The Wardog’s season has come to an end.

Ron’s confidence is growing each week. He feels pretty powerful in the game and it’s understandable why. Since Eric left, he’s found himself in a good spot at each vote despite still being viewed as one of the remaining Goliaths among a field of Davids.

After being in on the Julia, David, Kelley, and Wardog votes… Ron knows he’s one of the last remaining big threats. But while Ron becomes more dangerous, Aurora seems to be settling in with the rest of the Davids just fine. Aurora vs. Ron seems to be coming soon and now that Ron has returned the extra vote to its owner, it’s so easy to see that vote being used to take Ron down.

Rick needs to be very careful as he progresses forward. It seems like he’s underestimating all of the players around him; everyone he’s claiming to have a “weak resume” looks to be banding together to take out the top dogs (/the Wardogs).

Rick is running out of runway and despite his two immunity wins, it’s hard to see him lasting all the way to the end Mike Holloway-style unless David Wright is able to send him an advantage every round. I don’t know who in the game is still looking to work with Rick aside from Ron, which makes this feel more like a bottom 2 write up than a 1-to-watch… but too many former Manus have gone out lately and I really don’t know if I can picture losing another one just yet.