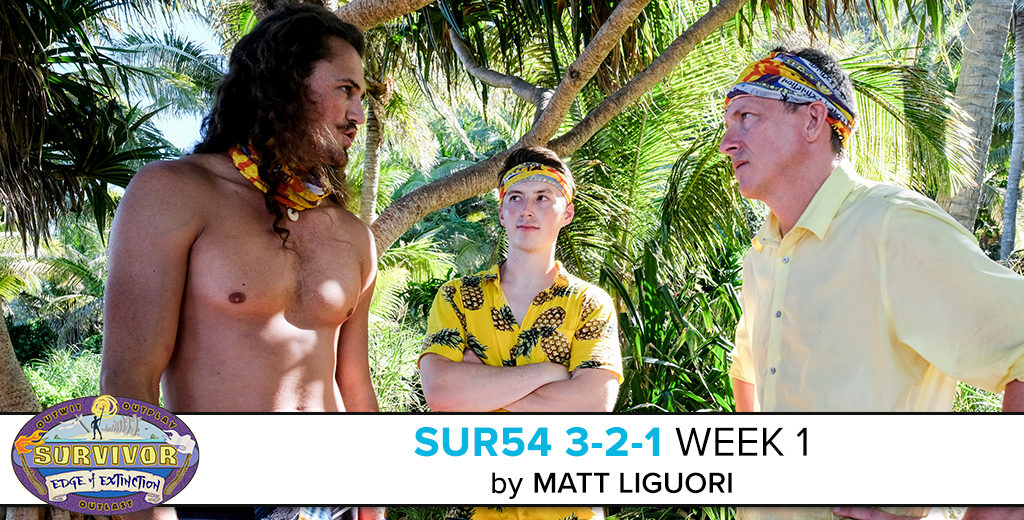 As nervous as we’ve been for Edge of Extinction‘s big twist, I’m hopeful everyone is keeping as much of an open mind as possible… if for no other reason than knowing Reem Daly is not gone for good just yet. It was really fun seeing the four returnees get back out there in this week’s premiere episode, as well as meeting a solid crop of newbies eager to get into the game. While any Survivor premiere under 90 minutes feels like not enough, we’ve got plenty of season ahead of us to look forward to… as well as the possibility of some longer episodes in our future if CBS listens to the many fans replying to Jeff Probst on Twitter.

Reem’s torch was snuffed, but her fire burned bright at the season’s first Tribal Council, going toe-to-toe with a player she acknowledged as a Survivor legend in Kelley Wentworth. From where I’m sitting, Reem didn’t do anything wrong and surely wasn’t the weak link on that tribe… but someone has to go first. Whether or not Reem will earn her way back into the game remains to be seen, but at the very least a spot on the jury is there if she can keep herself busy for the next 36 days on the tiny island with nothing to do but wait… and wait… and wait.

Looking back, I’m feeling good about last week’s preseason blog. The Manu tribe had three clear outcasts: Reem, and both members of last week’s bottom two (Keith and Wendy). Our one to watch, Aurora, is off to a relatively quiet start but let us know she’s all in on #TeamJoe… not a bad meat shield to hide behind. The top three of Gavin, Victoria, and Wardog all had solid premieres, most specifically Gavin who linked up with Eric and seems set up to do well by the firefighter’s side.

As a special bonus this week, make sure you check out the latest edition of the all new stand-alone podcast, This Week in Survivor History (a.k.a. TWISH) as Jordan Kalish and Rob Cesternino invited me to join them for this first edition of the season. We had a great time going over this week in Survivor social media and playing a very intense round of the TWISH quiz!

Any thoughts, comments, agreements, or disagreements down below? Send them my way in the comments or on Twitter, @mattliguori!

The Manu tribe may not be off to a hot start, but at the center of all the action is a newscaster who has somehow already been awarded the prestigious Jeff Probst last name treatment. There’s a majority alliance at Manu containing six out of the eight remaining tribe members, and Rick is right in the thick of it. Rick was confidently prepared to pick off the three outsiders as soon as he recognized their distance from the rest of the tribe, making it clear that he feels secure moving forward with his group. Going forward we’ve got Keith and Wendy still outside the alliance while Kelley and David remain big targets in front of Rick even if the alliance were to crumble… leaving Rick comfortably high atop the tribe’s ranks.

Eric had a great first episode. He performed well in the challenge on Kama’s way to their first immunity win of the season, while forming a connection back at camp with Gavin (a superfan with his head in the game). Eric’s strength is going to be extra beneficial on this tribe in particular as thoughts of “Can we afford to take out Joey Amazing and lose his challenge abilities?” may easily be answered “Yes” thanks to Eric.

Fans were pretty split on Eric preseason with some comparing him to Jeremy Collins while others compared him to a JP Hilsabeck. After one episode, I’d say those who had confidence in Eric are welcome to lightly pat themselves on the back. This guy is here to play. Next week will be huge for Eric, especially if his tribe loses immunity. He’s expressed interest in taking out Aubry as soon as possible, but now may not be the right time and he’ll have to be very careful if he makes an attempt.

Of the four returnees, David seems to have positioned himself in the best possible spot. He’s laying low while linked up with the big personalities (Rick, Wardog) of his tribe’s majority alliance. After going to battle with Reem at Tribal, the existing target on Wentworth’s back is glowing much brighter than David’s.

David is smart enough to know that Wentworth leaving next would be detrimental to his game, so I don’t think he’ll let it happen… but either way it seems like he’s got a good amount of influence on his allies. If he can stay close to the newbies and keep Wentworth by his side as a shield, David should have no worries until a potential swap comes along.

After narrowly escaping the vote thanks to “(Don’t) Call me Mother” Reem Daly, Wendy is right back in the hot seat essentially by default. Last week, I was wondering how much of Survivor Wendy had seen, and within minutes we find out she’s a “Super Mega Ultra Fan”. I’m still not positive I buy that, given her strategy of attaching herself to a sinking ship even after being told there was no hope, but perhaps it’ll work out for her in the end showing how loyal she’s willing to be.

I like Wendy and I’m glad she’s sharing her story of living with Tourette’s, but the separation between herself and the majority alliance seems like too much to overcome if they wind up at another Tribal Council. Wendy has to hope for the next challenge to be in the water and for Keith to fail, giving the tribe a reason why she’s more valuable.

I really didn’t expect Aubry to land down here this early on, but it wasn’t a great first episode for Bracco Nation. Her head is in the right place! She wants to lay low and strike when the time is right, but my concern is that she may never get the chance to do so. We didn’t see Aubry making any connections in the premiere unlike the three other returnees and that raises red flags for me. Kelley has Lauren, Joe has Aurora, and you could say David has Wardog, but who does Aubry have?

We didn’t get a great read on the Kama tribe’s dynamics. We know Eric and Gavin have linked up, while Joe (like usual) has proved himself very valuable for challenges and back at camp. While Julie appears to be the tribe’s weakest member thanks to a big toe splinter and poor bamboo chopping technique, we heard directly from Eric that he wants Aubry gone. Combine that with the preview for next week and I’m low on confidence that these newbies have any interest in working with Joe and Aubry in the same way Manu seems to be working with David and Kelley.

Does the Ron Clark academy prepare you for how to tackle a menu full of Survivor advantages? If not, Ron better get his thinking cap on quickly. The professor can either steal a reward from the other tribe, pick up an extra vote, or get his hands on the season’s first immunity idol. The menu expires after the third Tribal Council and you have to imagine Ron won’t be too happy if it goes to waste.

It’s hard to say where Ron stands within his tribe, but it doesn’t seem like there are any clear Kama outcasts. The “next time on” suggests Ron may be working to target the returnees, and if word gets back to Joe and Aubry… they could try to plant the target right on Ron’s back (unaware of the advantage menu). Probst told us in his assessment of Ron that he’ll struggle to sit back and let others call the shots, and I’m thinking that read might’ve been accurate.