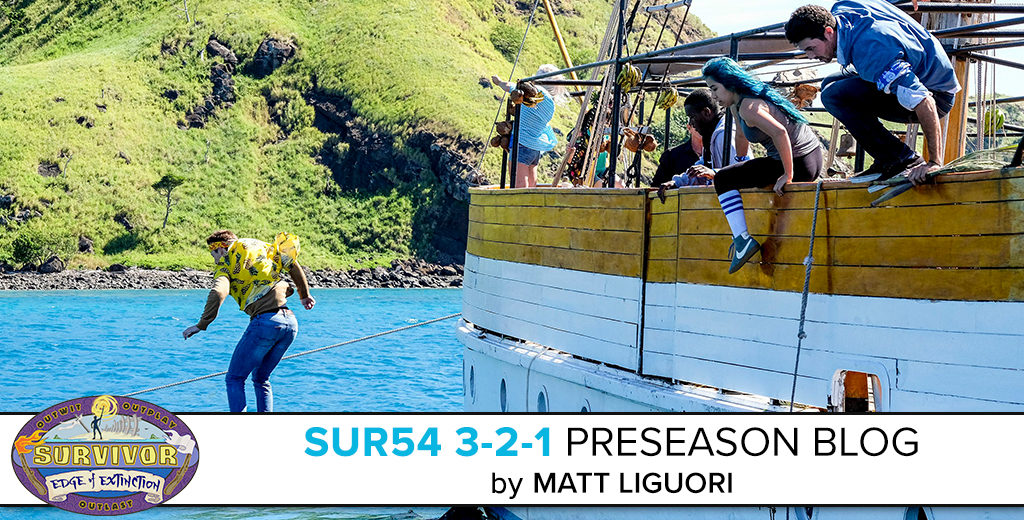 Much like our returning players, I myself am back again for another chance at redemption. While this blog isn’t all about an end goal of picking the winner, it sure would be nice to get one of those correct! Things didn’t work out with my Kara Kay pick at the end of David vs Goliath, but thankfully we can reset and look ahead to a brand new season. Edge of Extinction is about to kick off and the reaction has been mixed to say the least. I won’t harp on the twist too much (everybody else has that taken care of), so I’ll keep my fingers crossed and try to stay as optimistic as possible.

I’ve come around on these new players after my initial reaction wasn’t so great. We have some potential big characters here, and a handful of superfans that should make the gameplay fun to watch even if the mess going on at Extinction Island has us on edge. As for the returnees, all four have been fan/casual favorites in the Survivor 30s, so good on them being invited back for another shot. Personally, I’m very excited to see Kelley back, having been rooting for her all the way back since San Juan del Sur.

If you’re new around here, welcome! Every week I’ll be breaking down my thoughts on the players, covering who I believe to be:

For this first week only, I want to give the newbies their day, so the 3-2-1 spots are all theirs, but I’ve also ranked the returning players right below.

I’m very excited for another round of the 3-2-1 after all the great feedback in its debut season, so thank you again for that. As always, check me out on Twitter @mattliguori and leave a comment below to let me know what you think!

My clear #1 newbie of this bunch is Gavin Whitson. He’s a superfan and he seems very easy to get along with. With the southern accent, it’s hard not to make comparisons to last season’s winner Nick Wilson. Funny enough, I think Gavin could improve on the game Nick played.. adding an extra layer of patience and charm. I don’t think Gavin will play too hard or be too overtly threatening. His challenge strength won’t be as obvious as someone like Eric or Chris and that should put him in a great spot.

After a peek into Gavin’s Instagram, I see he’s a big Disney guy. If Gavin has sat through countless viewings of Fantasmic! and Wishes, there’s got to be a soft side to him that will be helpful in making those personal connections. There’s a great big beautiful tomorrow shining at the end of day 39 if Gavin plays his cards right.

I’m here for Victoria. She’s been preparing, she’s a big fan, she’s very likable, and she’s a waitress! Coming into Survivor as a bartender or a waitress is very helpful as you already know how to interact with all different kinds of people. (Right, Michele?) Everyone should be trying to pull Victoria into their alliance… she’s way too smart and reasonable not to want to work with. She also seems well spoken enough that she won’t trip over her words during a potential lie and she could be great with a final tribal speech if she finds her way there. She said it best herself: she’s a triple threat without looking like one.

I love the line from Victoria’s bio about having a 4.0 in college and bringing it up any chance she gets. It reminds me of myself and my perfect attendance bragging I did for a few years after high school even though nobody cared. Plus, as a bonus… Victoria is from New York. She’s got this.

I really didn’t expect to be putting Wardog in my top 3, but at the last minute I decided it felt right. Wardog is another big fan, intelligent, and likable in a goofy-character kind of way that I think could come off non-threatening. I expect Wardog to make the merge; his military strength will keep anybody from wanting him out too early. Other players may look at him and think he’ll be a big threat, but once they talk to him they’ll realize he’s better on their side than out of the game. He’s fully aware that he looks like a Tony or Domenick and is planning to actively avoid those comparisons by not playing aggressively early on.

A minor observation… Wardog’s bio mentions he’d like a chess board on the island and I like anytime I find out a Survivor or Big Brother player plays chess; it just tells me they’re always thinking of upcoming moves/plans.

Wendy is a very big personality… the kind that will easily get under the skin of a group of people stranded together on an island. It’s not too clear to me how much of Survivor she’s seen, but given her bio answers about her excitement for the “outdoorsy stuff” in the wilderness, I’m guessing not a lot. If the fun blue hair isn’t enough to make Wendy stand out, the high energy level she’s bringing will get the job done. Last season I looked at Lyrsa as a likely first boot but she was ultimately one vote away from making the merge, so perhaps Wendy will follow a similar trajectory? I’m not exactly counting on it.

I like Keith and I think there’s a chance he could go far, but I don’t see a world where Keith wins the game. There’s a reason previous young players lied about their age… being 19 surrounded by players over 10 years older than you can create a disconnect impossible to ignore. To be fair, I’m not sure anyone would believe Keith if he tried to lie about it.

Keith says he’s a superfan… but not all superfans are in it for the long haul; some pour rice in a sock and end up voted out at their first Tribal Council while some win the whole game. I’m sure Keith will keep his socks on his feet, but he and his socks have a lot less life experience than the rest of these players and that’s what brings him down to the bottom two.

I really hope Aurora is around for the long haul. I like her energy a lot, I’m just not sure if her tribemates will too. She’s very smart, but if we can pick up on that two minutes into a pregame interview, I’m sure the players on her tribe will too. Aurora could easily be seen as a big threat early on and have a rough time avoiding that, but if she lays low like she says she intends to, she could be a lot of fun around merge time. I also love that Aurora’s “players you’re most like” are Tyson and Ciera; maybe it’s just the Blood vs. Water stan in me but I love both of those players and it has me feeling good about her.

Reminder: For this one week only, I’ll be ranking the returning players separate from the newbies.

Charm. Of the four returnees, I’d say Kelley is the biggest threat; she’s likable, she’s strategic, she’s athletic, and she can find idols. While all four will be huge targets, I’m hoping Kelley being such a fan favorite helps her find some of the superfans to link up with. I know if I was on this season and had the opportunity to play Survivor with Kelley Wentworth, I’d be all in. Last time, Kelley was one challenge away from winning the whole thing. Like she said, she’s already done 38 days.. what’s one more?

Strength. Joe’s social game and challenge strength tend to keep him around until the merge, but he’s never been the biggest strategist. I don’t think it’s impossible for a Joe or Malcolm type to go all the way, but they need to put in serious work to find someone willing to take them along. I’m not very confident Joe will find a way to not get voted out in that exact same spot he’s used to, but there’s no denying this season’s twist will be in his favor. Joe has to be the top pick to re-enter the game in any given challenge. Win a challenge.. make a fire.. face the jury? There couldn’t be a more ideal path for Joe to win, unless he entered the game on day 39 or something. (Sorry, don’t let me give the producers any ideas. Stop reading, Probst… I was just kidding!)

Strategy. I think David is the most well-equipped strategist out of the returnees. If he’s able to work his magic on the newbies he could easily go all the way. David has the advantage of not looking like the biggest threat even though he definitely is. He can fly under the radar for half of the game while building connections and using plenty of self-depreciation to remind everybody “oh I’m never going to win” even though he very well could. David’s biggest obstacle in the game will be the other returnees, because they know he’s someone to look out for. It’ll probably take an idol or two to keep him totally protected all the way to day 39, but who says that can’t happen?

Intelligence. Aubry is very smart and pretty good at the game, but I can’t help feeling like at some point along the way she’ll have the rug pulled out from underneath her. Aubry has already played a near-winning game of Survivor, having faced a jury vote and being considered someone who “should have won” which is farther than any of the other returnees have gone. However, if I’m ranking Aubry fourth here… maybe the new players are mentally ranking her fourth as well? If she’s seen as the least threatening returnee from the jump, she’s right where she wants to be.