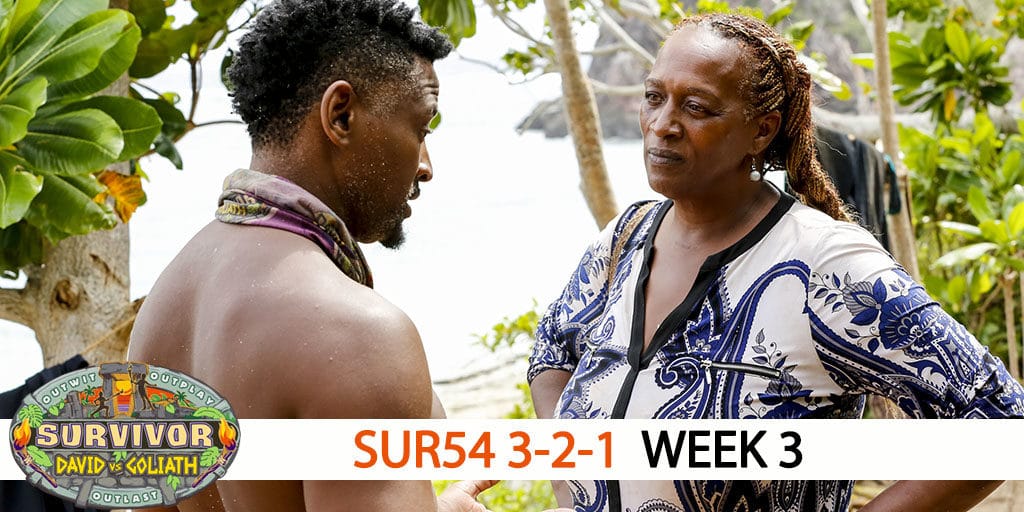 For all of the times I’ll rag on myself over getting something wrong, I try to enjoy the small victories when I happen to get one right. When you looked at the numbers on the Goliath tribe, it seemed like Jeremy was positioned to be the first person sent packing just by process of elimination. Jeremy played himself, focusing all of his attention on taking Natalie out rather than keeping himself safe. He should’ve been spending that time bonding with the rest of his tribe and showing them something he can bring to an alliance rather than putting all of his hopes on them deciding to take out one specific player.

As for the rest of last week’s six highlighted players, not a whole lot has changed. This week’s episode was ~80% revolved around the Natalie and Jeremy feud, with most other storylines taking a back seat. A tribe swap is coming up next which makes my job here a little tougher, but I’m less upset about that and more upset about the fact that the season has been so good and I’m afraid a tribe swap could put that in danger.

So we’ll just hope for the best… which would be an exciting episode, worthwhile gameplay, and safety for Natalie Cole.

I continue to be impressed by John. Not only was he able to keep Natalie in the game, he and Angelina got the full job done in taking out their target, Jeremy. John told us that he feels like he’s getting back to basics out on the island, forming genuine human connections. Nothing we’ve seen gives me any reason to believe that what he’s doing isn’t working. On top of that, hearing him accurately dissect what Jeremy was doing to save himself (the tribe meeting), shows me that John is actively keeping an eye on each of his competitors and is good at picking up on their gameplay and intentions.

We haven’t checked in with Nick on here since the season began. After his time in the game nearly came to an abrupt end, Nick seems like he’s here to play. He’s found a way in with different members of the David tribe and seems well situated for this swap. This week we saw Nick contemplating taking out Gabby, who is the other #1 to his current #1; that kind of move is always worth it if you can get the job done. However, having won immunity, he wasn’t able to pull the trigger… but his willingness to play hard leaves me feeling good about him going forward.

The David tribe caught a break this week having finally won an immunity challenge. Had they lost, Christian’s power of persuasion would’ve really been put to the test. It seems like Nick’s wheels were spinning on the idea of taking out Christian’s other #1 ally, Gabby. Being that his BFFs weren’t so likely to play in the sand together, Christian may find this tribe swap beneficial. Even if he swaps onto a tribe where he’s in the minority, I think his nerdy charm could work on the Goliaths just as well as it has for the Davids and he’ll keep himself distanced from the chopping block.

For a second consecutive week, Bi and Bi’s knees find themselves in the bottom two. An injury this early in the game isn’t great… but an injury this early in the game when you have only two allies and are about to swap into a new tribe? REALLY not good! If Bi’s injury doesn’t take her out first, her new tribe is going to have a really easy time choosing her as their first target for the obvious disadvantage her knee brings along. Injury aside, Bi seems focused on getting Gabby out of the game. You all saw how well that worked for Jeremy with Natalie, right? If Bi ends up on a new tribe with Gabby and puts all of her energy into taking her out, I’d think there’s a high chance that Bi follows the same path as Jeremy, straight to Ponderosa.

My confidence in Natalia as a Survivor player couldn’t be much lower. As a television character, I’m all in. Natalia plays the game with her emotions; she admitted as much this week when she said she’s probably only so insistent on Natalie going because she doesn’t like her. For now, pushing back against Angelina and whoever else isn’t the end of the world, but Natalia isn’t flexible nor influential enough to get her way… and sooner or later that will catch up with her.

I don’t want to get ahead of myself, but I think we’ve passed the part of the game where Mike would have gone out if he were going to be an early boot. Mike is naturally a super likable guy, and having cooled off of the idol hunting, I think he’s fitting in well with the rest of his Goliaths. I like that Mike was able to acknowledge that even though the two had bonded, Jeremy is an aggressive player that could be more of a hinderance than a help, and taking him far into the game would’ve been risky. Perhaps Mike would’ve rather see Natalie go first, but the unanimous vote tells me he (wisely) didn’t put up a fight against the Jeremy plan. I wasn’t super high on Mike coming into the season, but he’s put a smile on my face every week and he’s quietly looking like one of the bigger threats to glide deep into the game.