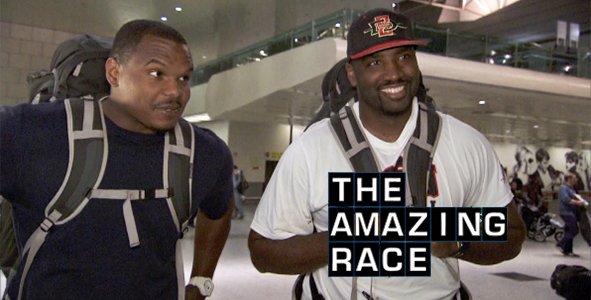 In the last two legs, I complained bitterly about the fact that the legs were designed to divide the teams into two packs, one of which raced for first and one of which raced for last. Thankfully, we aren’t completely three for three on that front. A plethora of flight options meant that teams wound up on four different flights from Santiago to Lisbon, shuffling the order around considerably and creating the opportunity for some excellent airport drama.

Nicky and Kim rebounded from a relatively pitiful Leg 2 to wind up at the front of the ticket queue once they reached the airport, thanks to discovering and utilizing an extra ticket counter. Though it caused a little bit of conflict when their smart thinking caused them to fall out of favor with Tim and Marie, even Marie admitted later, in a bonus clip, that she’d have done the same thing if she’d thought of it. (Marie frequently seems to be under the Hantzian impression that if she and Tim don’t win, the system is flawed. So it’s refreshing to see that she can actually appreciate good racing skills in others.)

Though only three teams ended up on that first flight, and those teams did end up being the top three teams, the flights were all close enough in scheduled arrival times that making that first flight wasn’t a stroke of outrageous fortune the way it was in the first two legs. Scheduled, of course, being the key term here. Before I could even finish tweeting “Any time there are that many flights in play, chances are high that one of them is going to go wrong,” something went wrong. And y’all know I type fast.

Frankly, I’m surprised missed connections don’t happen more often, given the sheer number of flights teams take every season. But then again, most teams know better than to zig when others are zagging, or to book a flight that’s needlessly complicated. After getting semi-screwed at the ticket counter, Chester and Ephraim did both.

Granted, there have been plenty of times where a team has taken a gamble and found a flight that helped them get a leg up on the other teams. Looking to do that, in and of itself, wasn’t a bad idea. But where that has worked, none of those flights ever involved an extra layover with a tight connection. The footballers’ gamble was simply too big, and their flight had too many variables, to be a practical way of getting ahead. Still, I’ll miss them. They were decent racers apart from this one streak of bad judgment and luck, and their barrage of pop culture references and easy rapport were refreshing on a Race full of teams vying for camera time with rehearsed schticks (I’m looking at you, Pinky and Afghanimals). They deserved better than to have Phil meet them at the airport with his elimination face on.

(Incidentally, it was never made clear exactly how far behind Chester and Ephraim were, but Phil has said that in the past, he has spent up to 19 hours on a Pit Stop mat waiting for teams to arrive. So I think they had to be pretty far behind in the end, or they’d have at least gotten the dignity of a trip to the Pit Stop. I’m betting Phil wasn’t just at the airport to perform a mercy killing—chances are, he went straight to a terminal and boarded a flight of his own. Thus Chester and Ephraim join a very elite club of teams who’ve had Phil come to them rather than vice versa.)

But let’s rewind a bit, to the actual Race that counted. This week, we saw a lot of teams teaming up—Amy/Jason and Travis/Nicole; Tim/Danny and Adam/Brandon; and of course the teams who are perpetually teamed up, race spouses Leo/Jamal and Ally/Ashley—as Marie christened them in a bonus clip, the Iceghanimals.

Short-term task cooperation is where alliances really shine on The Amazing Race. Yes, you should absolutely make friends with the other teams. Lifelong friendships are forged on this show, and having people around you that you genuinely like can be a real morale-booster. Trading favors can also work for you. And yes, if you see that working with another team will make a single task much less stressful for all of you, and it’s not going to mean one of you gets eliminated, that’s absolutely a great call to make. Dividing the labor so that your two strongest racers handle the giant compass and/or your two smartest racers do the math? And everyone’s out in front and ready to resume competing once that one task is out of the way? Excellent. I’m happy with Travis and Nicole’s first-place finish, and Jason and Amy’s runner-up position, this week. And I enjoyed seeing the Beards and the Oklahoma boys bonding as well. Both of those teams have been far more entertaining than I’d thought they were going to be.

When I blast teams for focusing on alliances, I’m really just blasting the ones who seem to think they’re on Survivor—the ones who want to “take down” other teams and scheme their way to the top. We saw how much scheming did for John and Jessica last season. And alleged physical/strategic powerhouses Tim and Marie can boast back-to-back 8th place finishes. They’re even more ineffectual as villains than Max and Katie were by this point in their Race.

(I would, however, like very few things better than to see Ally and Ashley in the back of a pack and watch them beat Leo and Jamal, who clearly think they are the superior racers, in a footrace. It’s probably not going to happen, but it would be pretty sweet.)

To have Marie—the self-professed strategic mastermind of this race, its John Erck if you will—get tripped up by a puzzle so easy that Mark Burnett would probably have vetoed its use on Survivor…well, that was pretty satisfying. If you ask me, that’s more egregious than forgetting that the Panama Canal didn’t exist in Magellan’s day, or temporarily not realizing that the world is round. If we had the Amazing Race equivalent of an anti-Fishy, I’d gleefully award it to our resident villains.

Given Tim and Marie’s position, and the tough time they were having, the Tiles detour was absolutely a correct time to contemplate using their Express Pass. They knew other teams were directly ahead of them, they knew they wouldn’t be in and out of the puzzle, and they had no way of knowing that Chester and Ephraim hadn’t even made it to mainland Europe yet, so they couldn’t prove they weren’t in last. If Chester and Ephraim’s gamble HAD worked, using the Express Pass might have helped Tim and Marie break ahead of the Iceghanimals and stay out of last place. In which case I bet we wouldn’t have gotten to see that great shot of Phil messing with them. He does frequently tell teams he is sorry to tell them that they have to keep racing, and he does frequently pause for dramatic effect when he reveals the order, but I’ve never seen him commit that hard to a fakeout. Phil is much subtler than Jeff Probst when it comes to his personal biases.

However wise contemplating their own Express Pass was at that juncture, it’s a different story when it comes to Tim and Marie’s other Express Pass. The smartest play would have been to let the Bunnies ineffectually burn it off in the last leg, but now that Tim and Marie are still hanging onto it, they’ve started to become obsessed with it. Instead of working on other ways of establishing an advantage and getting further in the game, Marie is clinging to this tiny bit of leverage, and it’s now starting to slow them down. Frankly, I’m pretty well over it, and I’m guessing most of the teams are getting there too. An Express Pass is a nice thing to have, but it’s not the be-all and end-all of racing. Certainly it’s seeming increasingly less worthwhile to suck up to Tim and Marie over it.

(By the way, one final observation on Amazing Race villains. I know that editing can only go so far, but it is worth mentioning that I have had many interactions with Amazing Race teams over the years, and almost without exception, the nicest and most fun teams to interact with have been the ones who were cast and portrayed as high-strung, bickering, villainous, or some combination of the above. To name a few: Team Guido, Terence and Sarah, Dave and Rachel, Max and Katie, Brett and Holly. So if I happen to meet Tim and Marie at TARCon, I will not be surprised if they turn out to be awesome, even though they are less than awesome on television. For now, though, I’ll do my best not to pull my punches.)

In honor of Chester and Ephraim, I’ll close out this week’s blog post with a list of other Racers who’ve been screwed by poor airport choices and/or luck over the years.

Great Moments in Amazing Race Airport Victim History
(a by-no-means-comprehensive list—I know I missed some. Get off my back.)

Peggy and Claire, TAR2: Early victims of Heathrow Airport, the “Gutsy Grannies” tried to get from Brazil to South Africa via New York and London and wound up almost a full day behind the other teams. Their ouster might be the 19 hours on the mat that Phil referred to.

Dennis and Andrew, TAR3: Father/son team Dennis and Andrew simply wound up on the wrong end of the ticket queue in Cancun, and a missed connecting flight pushed them even further behind. Though they made up what they estimated was about 20 hours of time by snagging a Fast Forward once they arrived in the UK (back in the day, there was still one up for grabs on every leg), they were still hours behind the pack when they finally checked in.

Teri and Ian, TAR11: Amazing Race: All-Stars was a unique season in that filming had been scheduled smack in the middle of a perfect storm of summer holidays and religious pilgrimages, meaning that almost every flight in southern Africa was about 40% oversold. As a result, Teri and Ian (and Joe and Bill) were left stranded as they tried to find a flight, any flight, to get them to Tanzania. Race brass had to come up with some of the most contrived bunching ever to put Team Guido back into competition in the following leg. (And then a second round of rotten airplane luck on the way to Poland ended up contributing to THEIR elimination.)

Uchenna and Joyce, TAR11: Airport troubles have never been as egregious as they were in All-Stars. Uchenna and Joyce found a flight to Malaysia that they thought would give them an hour and a half lead on the other teams. Then the Frankfurt airport happened. (Abbie and Ryan can sympathize, I’m sure.) They reported that they did all of the tasks once they got to Malaysia, but in the end, all they got was a coda at the end of the episode where they were directed to go straight to the pit stop.

Brad and Victoria, TAR14: Season 14’s designated Mom and Dad team seemed decently competitive until Leg 3, when they tried to break away from the pack. Weather conditions in Amsterdam caused their connecting flight to get cancelled, and while they reported later that they made up about 12 hours of time, it just wasn’t enough, and they, too, received that classic edit where we did not see them again until the last thirty seconds of the episode.