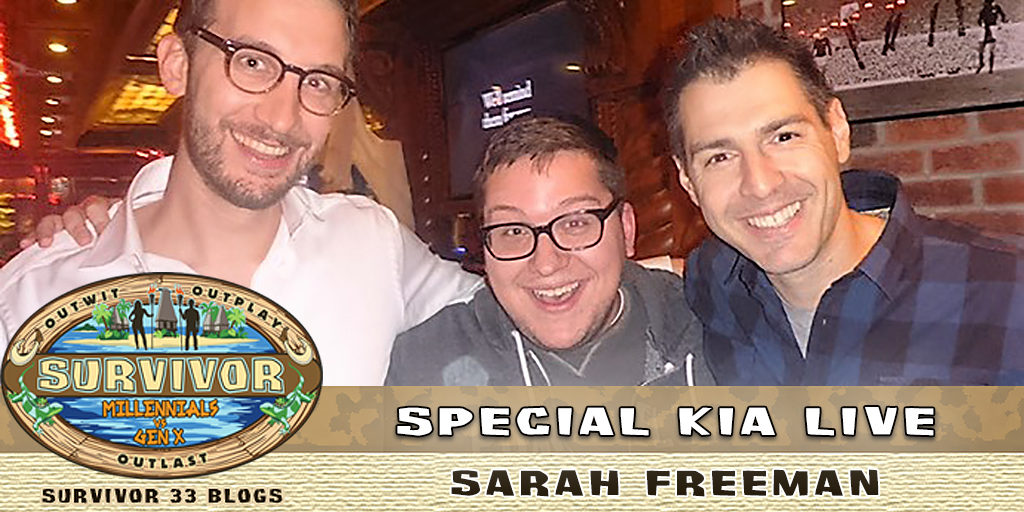 Sarah Freeman attended the Live KIA show at Caroline’s on Broadway this week and brought back evidence of a great time. Click on a thumbnail to activate the slideshow at the end of the blog.

Showmance Is Dead; KIA Is Live

When Adam cast his fateful vote in Fiji last spring, little did he know that he was choosing between the fan favorite and the most hated showmance since Candice Woodcock locked lips with Adam Gentry. Still less did he know that when the episode aired, he would be held immediately accountable for his actions by a room full of over-excited RHAP fans… and again, an hour later, by a bar full of over-excited RHAP fans.

Unlike the previous KIA live, this one was preceded by another live show, Big Brother OTT. This ramped up the KIA pregame considerably. At the traditional patrons’ Karaoke night, Big Brother’s Jozea was a highlight, hogging the mike during a rap duet with Rob. And let’s not forget that when Mike and Jordan took to the stage for Bruno Mars, this happened:

Big Brother correspondents, Jordan Parhar and the LFC had set up a Podcast House again (new location, same ominous ambitions). Gathered together with like-minded Millennials, they took it upon themselves to test the oft-discussed idea of a streamed RHAP Mario Party. The result was an emotionally charged superfan’s journey, with a shock twist that would make The Genius proud. (Or so they assure me.)

Watch live video from  on www.twitch.tv
The competition continued over dinner, as I (being every bit the fun and exciting person you expect an internet writer to be) challenged any takers to build a pyramid out of two simple puzzle pieces. Colin Stone emerged victorious with a solving time of about thirty seconds. (Rumors that he had traced and memorized a screenshot of the completed puzzle remain unconfirmed.) In second place was Angela Bloom with a couple of minutes. The rest of the field gave up in favor of exasperation with me.

Dinner, for the record, was at John’s of Times Square.  Because when Josh Wigler recommends a pizza place, You. Go. There.

The effect of all this was a highly charged room for the episode. And while we were not setting our expectations too high for a pre-merge episode. this was a phenomenal episode for KIA for two reasons: Firstly, Michaela. The room was politely excited for Jay’s idol find, but we erupted in cheers when Michaela walked in on him. And the final part of the immunity challenge was deafening.

Secondly, it was the episode that bid farewell to Faylor (or, if you can stomach it, Figtails.) Rob had primed us for this last week, and we were all counting on Adam to do the right thing. Even at our table, where Colin Stone was pointing out every moment that foreshadowed a Figgy boot, the tension was palpable as we awaited confirmation that Adam was RHAP’s Player this evening. When the final vote was revealed, there was a standing ovation.

Adam repeatedly tried to dodge our congratulations over the course of the evening, anxiously explaining that the dynamics among the Millennials were much more complicated than we saw. He’s inevitably correct, but we weren’t letting him deny us our fun, and that meant he had to be the hero of the night. Try as he might to assure sundry RHAPpers that he was a bigger fan of them than they were of him, he wasn’t cracking anybody’s love goggles this time.

Not that this should overshadow the other S33 player in attendance: even without a mudpuddle to roll around in, Zeke won us over with his unerring ability to recognize all the podcasters, most of the patrons and a number of others as well. It turned out to be something of a Survivor Brooklyn reunion with Zeke, Sophie, Andrea, and a few other veterans of the YouTube series in the house.

The Survivor guest list was rounded out with Eliza, Brian Corridan, Francesca, Anna, and Liz, but the darlings of the evening (Adam aside), were Michele and Aubry, who were in near constant demand. Michele handled the attention as gracefully as ever, though Aubry at one point attempted to make a break for it by doing her best parkour across some bar stools. (I have absolutely no excuse for failing to get a picture of this. All the apologies.)

Since this time I planned to write a blog going in, I came to the evening with the full intention of taking pictures for the website. This, I discovered, gave me a glorious excuse to spend most of the after party ordering and/or dragging people into groups for photo opportunities, and getting disproportionately exasperated when they failed to cooperate. In other words, I was in my element.

As has now become tradition, I failed to get a conversation with Stephen as either somebody else would hijack him, or I would do it myself for a photograph. More successful conversationalists attempted to pass mocking comment on the Fight Night poster, but Stephen scored a surprise hit with the revelation that he used to box.

As is also tradition, Josh Wigler was there, if a little more subdued than at KIAs past, owing to his sick cat. He got a lot of love from us that evening, but send some more his way. Even in a saddened state, the Wigler effect makes every conversation ten percent better.

On the fandom side, we had all the usual suspects, plus Mel of Mel Got Served  who made her KIA debut as Aubry’s plus one. She was utterly delightful and perfectly poised as she hobnobbed with Survivors, only to completely lose her cool when she realized The Bachelor‘s Sharleen was there.

Predictably, the party lasted well into the night, though the LFC retreated to Podcast House for a 2 am podcast. Alex Kidwell failed to leave the bar on time and was MIA for the podcast, but he led a minor exodus to Podcast House afterwards, ensuring that crew would get no sleep before traveling back on Thursday morning. (And the less said about the resultant state of Podcast House, the better.)

The rest of us hung out at the bar, making a case for everybody’s winner edit, solving Westworld, and power ranking Black Mirror episodes. Periodically, one or another of us would announce we were leaving, but the road to the exit was paved with ‘just one more conversation’s. Ultimately we all ended up as a collective fire hazard by the door, where Adam assured Josh Wigler one final time of his super duper fandom before releasing us back to the wild.