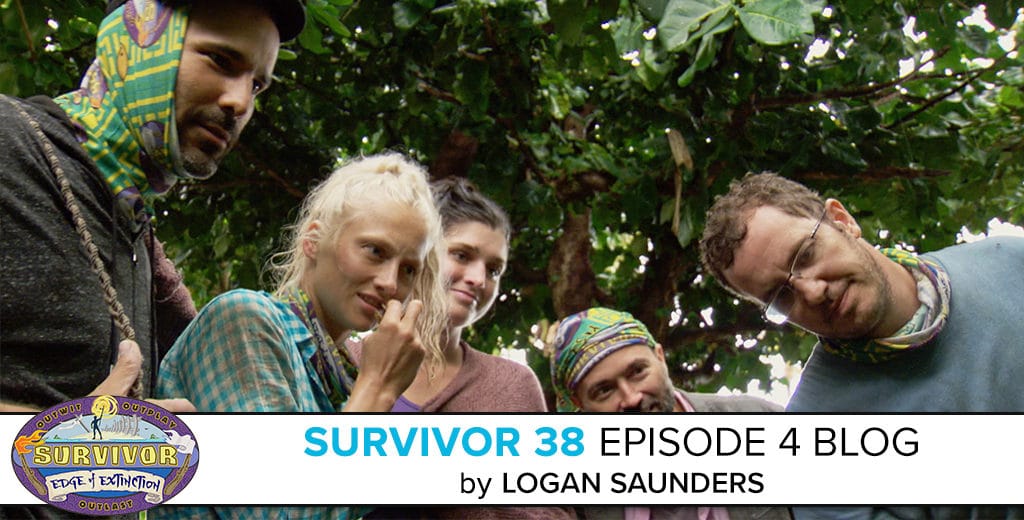 Logan Saunders recaps the fourth episode of Survivor: Edge of Extinction ahead of episodes 5 & 6 in his blog, entitled “Sea Cucumbers.”

At Manu, Wendy was rustling feathers. Wardog had a plan no one was expecting and eliminated Chris from the tribe. . .but not from the game.

Eighteen are still left; who will be voted out tonight?

Keith and Reem are surprised to see Chris.

KEITH: I’m not sad; how does it feel?

(KEITH and REEM laugh in his face.)

Yeah. Not the most warming of welcomes after he screwed both of them earlier in the game.

Wendy is looking good. She puts the flint back. David finds where the flint mysteriously popped back up.

WENTWORTH: She is not normal.

WENDY: If I keep going with the flow, things will go alright.

Do you. . .do you know what going with the flow means? You couldn’t be swimming harder upstream if you tried.

Everyone agrees Wendy is auto-booted next round.

Julia nearly dies from being shown on-screen when Chris was voted out. Ron says Chris appeared to be carrying the entire tribe.

Right when Wendy is on the ropes. . .she is saved by a swap. Thank goodness.

Julie has another urine confessional.

Everyone opens their new buffs.

Probst has to spell the new tribe name for Lesu.

Wendy goes back to her camp with her only allies–the chickens. It is now 4 vs. 4. I can’t wait to draw rocks.

More dancing in our sea cucumber switch. Edge of Extinction and Lesu has old Manu, Manu and Kama have old Kama members.

Joe is tight with Aurora. He identifies Ron as a swing vote. Ron plays along with Joe saying how awesome the three of them would be together. Ron plays up the love with Joe as much as possible.

We have another flashback to twenty minutes earlier where he told Julia to search through Joe’s bag. She finds nothing but seashells, Tree Mail, and socks. Oh yeah, Julia gets shut out in the confessional department again.

Wardog attempts to do math. He thinks the odds of the switch going that way were less than one percent. I am sure folks online are verifying that math.

A new shelter and a new fire is made at camp. Lauren is vomiting. She can’t eat the rice anymore. Lauren misses her family like that guy from Survivor NZ. Sala. That’s his name.

Wendy tells the other four they were all bullies and described Wentworth as the Godfather. She essentially presents a full dossier.

The former Kama cut to the chase and have wide eyes for the chickens. Wendy is nervous. They go into great detail about how to kill the chickens in front of Wendy.

And now for the most interesting thing to happen in four episodes. . .

Wendy kidnaps the chickens and gets them to fly away. It’s like she is rescuing them from R Kelly’s house.

A full day of rain and storms.

All three look terrible. Keith is sitting inches away from the mast. Reem and Keith casually chat as Chris sits alone several feet away.

CHRIS: This is voluntary torture . . .I have nothing but myself.

If only he would listen to The Divinyls.

Chris somehow picks up fishing gear. He looks bored as hell as he brings fish back to camp.

Eric notes the chickens are gone and spreads his suspicion that Big Wendy released them. Mid-confessional he hears the chickens clucking.

They agree to go on a chicken hunt with one nay-sayer.

They will race over a-frames with coils of rope. Pull a crate to the finish. Use the pieces in the crate to solve a puzzle. This is identical to the opening tribal immunity challenge of Survivor: Samoa. Top two tribes get the Targaryen tribal immunity idol.

Rain comes down and the A-frames are super slippery.

Manu is first up and over.

Lesu is not doing well with the first A-frame as Manu and Kama are both over.

Lauren is somehow first up for Lesu despite her weakened state.

Joe uses himself as a human ladder for Kama. Man, there are a lot of suggestive poses. I feel like new sex positions are being invented before our eyes.

Manu has a four-person human ladder. Aubry climbs over everyone. Incredible.

Manu and Kama are first two tribes to pull the crate. Lesu is only about twenty or so seconds behind.

Yeah, it’s all coming down to the puzzle once again.

Ron fails at inserting puzzle pieces. He is doing it with Joe.

Wentworth and Joe do the puzzle for Lesu.

Eric and Aubry are doing the puzzle.

In other words, all four returnees are occupying six of the critical spots in this challenge. They really want to prove they are invaluable.

Wendy is frustrated with Aubry and demands to swap in. Aubry jumps out.

Joe, who said on day one he was going to hold back in camp and at challenges, once again single-handedly wins an immunity challenge for his tribe.

The two returnees, who are solid puzzle solvers and have done many many many Survivor puzzles, was the tribe that blew it.

All nine original members of Kama have survived four episodes without a single trip to TC. They have tied with Koror’s record.

The five on Lesu are going to their fourth consecutive Tribal Council.

They all look miserable.

It blows my mind Lauren was the strongest despite her severely weakened state.

For the second round in a row, David and Rick are going to write down the name of the person who is doing the best in challenges.

David and Rick are convinced Wentworth has an idol. Soooo they are going to vote Lauren.

Lauren and Wentworth strategize. They go after Rick.

Way to switch from first person to third person.

I am sure the audience loves it that tonight’s vote is coming down to Wardog.

A lot of emotion during Tribal Council.

The rest end up on Wikipedia.

Nobody plays an idol despite Lauren playing her idol.

RICK: I take it all back. You guys are the worst.

Next Time on Survivor: A diabolical plan and a ray of light can push you over the edge.

We still don’t know seven of the players left in the main game. If Lesu loses another immunity challenge, I assume this pattern will remain intact. Lesu, Edge of Extinction, and two challenges next round to occupy 90% of the airtime.

Joe is in super-duper danger. I can’t see a way he survives the next Tribal Council.

I have no idea what to make of Manu. You have two wildcards in the form of Aubry and Wendy, and then three people who are invisible.

Lesu was responsible for what everyone from all demographics, both online and people of varying degrees form of fandom, say this Tribal Council was super boring and this season as a whole. Editors tried to make Lesu as sympathetic figures this round. . .but have failed miserably in the first four episodes to achieve that.

If David can snag the Lesu idol, it would be hilarious. I want to see Lesu go to the next two TCs prior to the merge. I assume Wardog would have to go next by default, Lauren and David both play their idols, then Lauren goes the next round because I can’t see her recovering from that illness.

Also, somebody has to quit Edge of Extinction soon as the field grows. I expect Keith or Chris to be the first quitter. Keith for youth and inexperience, and Chris because alpha males get REALLY bored when they have nothing to do.

I remember hosting real live versions of The Mole and the one alpha male in my group quitting a Locked Room Puzzle challenge just out of pure boredom rather than figuring the puzzle out. They need some sort of stimulation. Catching fish or staring at a puzzle isn’t enough.

Alright, we are about to enter a fifth episode in a row with an 18-person cast. Will your pre-season favourites/Kama get any airtime or will it be all Manu on Lesu and Edge of Extinction once more? Stay tuned because there is nothing else going on in the season!

P.S. It is odd to see two tribes divide into four camps. It’s like Survivor: Sea Cucumber Edition. So odd.